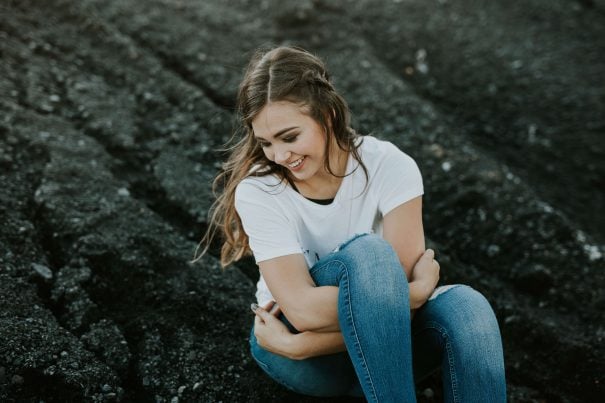 Have you ever found yourself laughing nervously when a conversation suddenly dropped?

Nervous smiling or giggling is often a way people fill the awkward silence they feel in a social situation.

Or maybe you’ve struggled to hear what someone was saying to you but felt too timid to admit you didn’t hear what they said, so you just offered a nervous smile and light chuckle.

Psychology researchers have listed humor as one of the most mature defense mechanisms that people use when they are experiencing levels of anxiety that are unhealthy.

If people can laugh at the horrible events that occur in their lives, it suggests that instead of ignoring them, they are preparing to survive them.

There are certain times in life when it is important to present yourself as being dignified and in control, such as during a work presentation or a funeral service.

However, these also happen to be the times when this inappropriate type of laughter is likely to emerge.

Using laughter as a subconscious coping mechanism to deal with stress and anxiety is common, however, laughing in these tense circumstances can have the opposite effect and enhance the awkwardness of the situation.

Psychologist Robert Provine studied over 1,200 episodes of laughter and concluded that 80% of laughter episodes do not come as the result of a joke. Rather they are instances of nervously laughing in response to a situation.

The physical difference between this type of laughter and regular laughter is that it originates in the throat instead of the diaphragm and other parts of the respiratory system.

It is not real laughter in the sense that we typically define it but rather a subconscious response to tension.

What is nervous laughter?

This type of laughter is an incongruous display of emotions.

While a good belly laugh resulting from amusement is robust, often immediate, and sometimes uncontrollable, laughing when you’re nervous is evoked from embarrassment, discomfort, or confusion.

It is often accompanied by an awkward silence from others as the situation plays out.

This reaction to anxiety is an attempt to move an uncomfortable situation along more quickly by trying to laugh through it.

According to neuroscientist Vilayanur S. Ramachandran, inappropriate laughter happens because people want to believe that whatever awful thing that is happening right in front of them is not as awful as it looks.

People want to lessen the amount of anxiety they feel so they display an emotion that would usually make them feel happy.

Some psychologists suspect that such displays of laughter could actually play a critical role in regulating people’s emotions.

When someone is at risk of becoming overwhelmed with emotion, either positive or negative, showing the opposite emotion may have a counteracting effect and repair emotional balance.

This theory makes sense if you think about someone who is getting married or has just won the lottery. They often start crying and appear to be sad when in reality they are experiencing extreme joy.

People with social anxiety become uncomfortable or fearful in social situations, largely due to the fact that they are concerned about being judged by the people around them.

People suffering from social anxiety feel uncomfortable talking to other people, and if they find themselves the center of a conversation, they often express laughter because of their nerves.

When someone with social anxiety can’t help but laugh in an awkward situation, it makes them feel even more self-conscious because their awkward laughter is out of context, and they think people will judge them even more for having an inappropriate show of feelings.

This devolves into a continuous cycle by feeding the social anxiety, which in turn feeds the laughter. Having this combination of social behaviors can be very frustrating and embarrassing for those suffering from the cycle.

How to Stop Nervous Laughter

Nervous laughter can happen to anyone, and people are often caught off guard when they find themselves inappropriately laughing at something that no one else finds funny.

However, when it becomes a habit, you can’t easily ignore it. This behavior can be off-putting both socially and professionally, and it may leave you feeling unsure of yourself.

This type of nervous laugh is hard to control because it is an automatic reaction that is reinforced over time. It may provide a temporary sense of release from the awkward situation, however, it can cause more anxiety in the long run.

Here are some thoughts on how to stop yourself from laughing when you’re nervous:

1. Being Self-Aware Of Your Anxiety

Before you can learn how to stop laughing at tense situations, you have to recognize that you do it. Many people are not aware they have this nervous habit and only know they need to work on it when it’s pointed out to them by a trusted friend.

If you are aware that you have this habit, you can work to replace it with something a bit more empowering. Start small by trying to smile and nod in awkward situations if you feel the urge to laugh.

Or, if you didn’t quite catch what someone just said to you and you’re typically too shy to ask, try saying something like, “I didn’t hear you. Can you repeat what you said?”

Doing this will help you become aware of the situations in which you use laughter as a coping mechanism.

When you find yourself wanting to respond to something with a nervous laugh and it doesn’t seem appropriate, look around for possible habitual cues such as where you are, the emotions you’re feeling, the type of people around you, or the circumstances that happened immediately before you felt the urge to laugh.

Over time it will become more clear which habitual cues trigger your awkward laughter. For example, you may find that it always happens when you are around a specific group of people like coworkers or people you don’t know very well and are therefore not completely comfortable being around.

When you can see your nervous laughter as the result of an outside factor, you can stop thinking of yourself as being a nervous giggler and shift your mindset to making choices to alter how you see and react to awkward circumstances.

You may need to think of ways to increase your confidence, or you might want to think about changing the way you interact with the people who tend to trigger you.

You may want to consider what it is about other people that trigger you, so you can address a root cause, such as low self-esteem or low confidence.

50 Of The Best Growth Mindset Quotes For Kids And Teachers

37 Positive Emotions That Make You Healthier and Happier

Once you identify your trigger, you can start to work on replacing your laughter with another behavior that gives you more control. Plan ahead for the habitual cue and choose a more rewarding behavior. Also, get rid of unnecessary sources of anxiety.

If being in a room that is packed full of people makes you uncomfortable, try to stay away from these situations until you have a grip on your nervous tendencies. Try to address anything that is causing you to feel anxious.

If you’re preparing for a specific conversation to arise that makes you nervous, write down the major points that you want to make. Laughter will most likely occur if your mind goes blank.

Another idea for diffusing nervous laughter is to face your laughing tendencies head-on. You can do this by telling people around you or those in your conversation that you are anxious or uncomfortable.

You don’t have to hide your laughter — you can just state the truth. Most people are understanding and will appreciate your honesty. In fact, they might even relate to it.

Learn about breathing techniques that can help you manage your emotions without having to display laughter.

Step away from the situation at hand when you are feeling particularly nervous to practice deep breathing to calm your inner self.

Take a deep, cleansing breath, and then mentally follow each inhalation and exhalation, as you breathe naturally. Do this for a count of ten or as long as it takes to feel calmer.

Clear your mind with each breath and return to the situation with a renewed sense of self.

If nervous laughter is something you struggle within social situations, it is bound to be uncomfortable for you and for those around you.

If you want to work on taking better control of your outward emotions, first identify the triggers that cause these emotions and then alter your behavior accordingly.

Come up with a different response rather than nervous laughter, and purposefully use the new response in situations where you would normally laugh.

This will take conscious effort and will require you to stop and think before you act when you are in social situations. But it can be done, and you can overcome this habit just as you can overcome any other habit.

I hope you found this post on nervous laughter useful and that you’ll use some of these techniques the next time you find yourself in an uncomfortable social situation.

Please help others who deal with this challenge by sharing this post on your preferred social media platform.