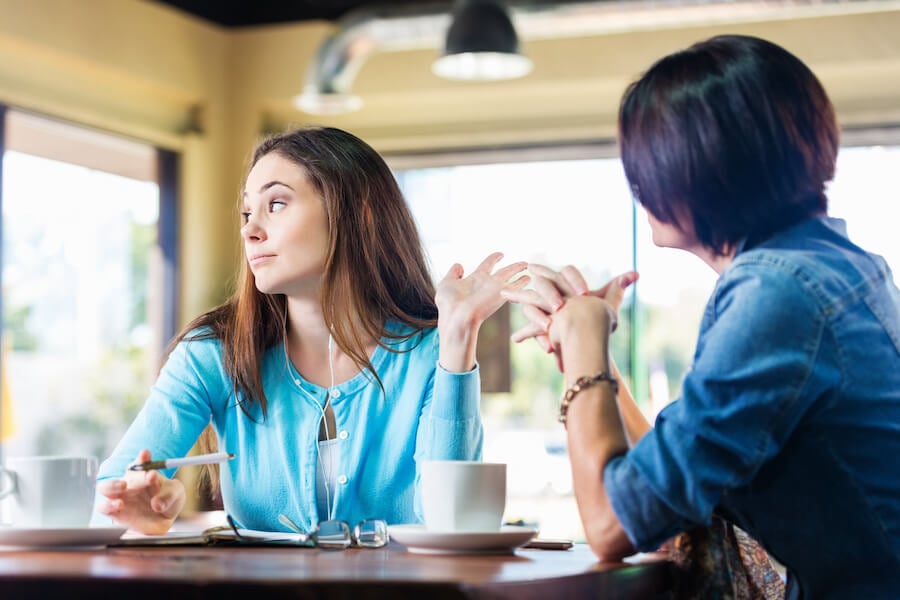 Just thinking of their patronizing words makes your blood boil.

You want to put them in their place. You want them to feel what you’re feeling.

And who wouldn’t? No one likes being talked down to. They have it coming.

More than anything, though, you want to handle this in a way that you won’t have reason to regret.

You want to remember your response with a smile and with peace of mind.

So, how do you deal with someone who talks down to you?

Read on to learn 15 of the best responses.

Talking Down To Someone: What It Really Means

When you hear the words “patronizing” and “condescending,” probably at least one person comes to mind. With some folks, you wonder if they’re even conscious of it.

With some, you know they are. But why do they talk down to you? What’s in it for them?

Using condescending language is a favorite tool of those who want to appear more intelligent, more sophisticated, or wiser than the one they dislike or disagree with.

Respond to a condescending jerk with anger, and they’ll often use it as proof of their assumed superiority. They’ll double down on the condescension while still trying to appear gracious and diplomatic.

It can be satisfying to shock them with a few choice words. But the responses given here will have a stronger and more satisfying effect.

Examples of Talking Down to Someone

Think back to some of the condescending or patronizing words directed at you and remember how you felt when you heard them. To help you recollect those moments, here are a few maddening examples of talking down to someone:

Now, make your own list of examples from your own experience. You’ll need it.

15 Responses When Someone Talks Down to You

Now, it’s time to look at 15 responses — both internal and outward — each one based on the situation and the type of person you’re dealing with. Some will no doubt sound familiar.

1. Don’t take it personally (even when it’s meant to be personal).

If someone is talking down to you to make you feel small or to get a laugh, it says nothing about you — but plenty about them (and nothing good).

If someone is talking down to you out of habit but not with meanspiritedness, it still doesn’t say anything about you. It means they’re thoughtless and possibly oblivious to the way they sound.

Depending on whether or not the condescension is meant to be personal, you can either gently correct them, take note of their behavior (and witnesses), or simply ignore them.

2. Expect it and ignore it.

You know this is just something they do — maybe because that’s the way they’re used to talking to others. If they’re rude, you’re within your rights to simply walk away and let them be their own audience.

If you know they don’t mean to insult you or make you feel small, it’s easier to simply brush it off as something they do out of habit. If it doesn’t hurt anyone, you might choose this response to avoid causing more trouble than their comments are worth.

3. Be upfront and call them out.

There’s no harm in calmly and directly saying, “Don’t talk down to me.” In effect, you’re letting them know you’ve noticed their condescending approach, and you’re not letting them get away with it. It stops them in their tracks and puts them on the spot for a change.

If they try to laugh it off as a joke that you’re not getting, maintain the cool composure. They might try to explain themselves, but if they refuse to acknowledge their patronizing tone or language, you don’t owe them an ear.

Maybe you’ve heard someone suggest a response like one of the following:

Of course, this approach only works when the other person cares about how you feel or interpret their words or delivery.

If they’re convinced they’ve done nothing wrong and you’re overreacting,  they’re more likely to dismiss what you say as weakness or silliness.

In short, don’t try to invoke what isn’t there.

5. Acknowledge where they’re right and add something to it.

Two can play at this tangent game. If someone talks down to you but says something true, you can seize upon that and draw from what you know to turn the talk in another direction. Add something interesting you’ve learned.

If the intent of their statement was sharp, this would dull it in a jiffy. Do it right, and any witnesses to the insult will be more interested in what you add to it.

If someone is a condescending jerk, you have every right to excuse yourself and put distance between you.

Use whatever excuse comes to mind, or simply interrupt them with “Excuse me,” in a calm, cool voice and leave them to their own company.

You’ve got better places to be and better uses for your headspace.

7. Walk away and find someone who talks to you with respect.

If you don’t want to dignify their comment with a verbal response, sometimes the best response is to walk away, whether they’re still talking or not. Find someone who manages to have a conversation without talking down to you.

You don’t owe condescending people a chance to finish their sentences or express their whole thought.

And it might be better to leave before you make an impression you can’t take back.

With active listening, you focus on what the other person is saying, as well as what they’re not saying out loud.

That way, you can pick up on the thoughts or feelings behind the words they say.

As an active listener, you might respond to a condescending remark by asking them how they are or whether everything is okay. People who don’t usually say hurtful things are more likely to do so when they’re in pain.

31 Good Mottos to Live By for a Stellar Life

9. Let go of any need to control the outcome.

The less invested you are in the conversation’s outcome, the less you have to lose.

If they’re talking down to you to humiliate you, but your self-esteem doesn’t depend on what they or any witnesses think of you, they have no power over you.

Let go of your need to control the end result of the conversation, and you can have some fun with it. Or you can simply walk away.

10. Set and defend your boundaries.

When someone talks down to you in a way that imposes familiarity, their goal is to manipulate you. Don’t let them.

Example: “Your shoulder strap is wandering a bit, dear. Allow me to fix it.”

This is the time to set clear boundaries in a calm but distinct voice and ensure the other person gets the message: It’s in their best interest to respect them.

If necessary, you can tell them what you’re prepared to do if they don’t back off.

If you’re dealing with a toxic coworker with a penchant for talking down to people and belittling them in other ways, keep a log — at least for the most inappropriate or offensive behavior. And keep track of who else witnessed each incident.

That way, if your employer asks you what you’ve noticed, you’ll have a written record of that behavior. Or if the coworker does something you have to report, you can back up your testimony with other witnessed behavior to show consistency.

Insecure people whose condescension is rooted in passive aggression are trying to send the message, “I’m better than you.”  Don’t buy it. Deep down, they don’t believe it, either.

Then again, some people talk down to you simply because, for some reason, they don’t like you. The less invested you are in whether they like you, though, the easier it is to let it go.

Sometimes, the only thing you can do is (1) recognize the fear or dislike behind these statements, and (2) walk away. It’s tempting to respond with cutting words, but that will only provoke the other person to level up their attacks.

Some folks are just so used to talking down to people that it’s become their default. And there’s more than one way to handle it when their behavior gets to you.

If your relationship with this person is important to you, you can gently point out to them how their behavior comes across to you and ask them to be more aware of it.

You can also defuse the situation with humor. Laughter helps people relax. For example, you might respond to the babytalk example by saying, “Well, my widdle face would prefer not to be eaten by your widdle face. I’m kind of partial to my face.”

14. Give them feedback, including how it will benefit them to stop.

This is less about how their words make you feel, and more about how not being a condescending jerk will benefit them.

Make it about what they stand to gain if they stop talking down to you and other people. Because maybe they don’t care about anything else.

Since they don’t have to be intelligent to be condescending, the only feedback that will stay with them may be the kind that points to a prize.

Some people won’t take a hard look at how they talk down to you unless they’re on the receiving end of it. Even if they are, though, there’s no guarantee they’ll make the connection between your response and their condescending behavior.

You’ll need to be careful with this one. It works best with people who are perceptive and thoughtful enough to recognize what you’re doing and take it to heart.

Otherwise, they’ll see it as an unjustified personal attack.

Now you know what to say when someone talks down to you.

Now that you’ve looked through 15 of the best responses to condescending language, which ones stood out as most helpful?

Make a list of your own encounters and ask yourself which of the above responses make sense in each situation. In some cases, responding with patience or with humor is best. In others, a more direct, diplomatic approach will get the best results.

Intent matters, and most of the time, it probably influences how you choose to respond.

No one wants to react harshly only to find out the person was absent-minded or distracted by grief. Whenever possible, put yourself in the other’s shoes before speaking.

You would hope the same from them if you spoke out of turn.