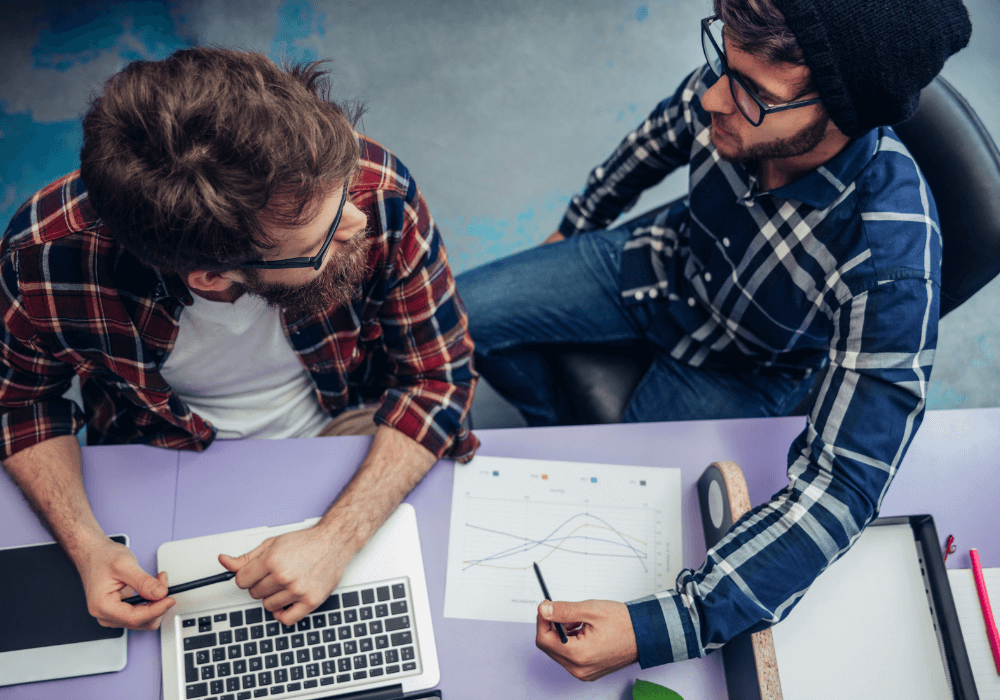 According to a CareerBuilder survey, of the top 10 productivity killers in the workplace, 7 of them involve too much socializing.

If you have coworkers who talk too much, this probably doesn’t surprise you.

You’re here, now, because you want to know how to deal with people who talk too much — or how to tell someone they talk too much in a nice way.

After all, you still have to work with them.

So, why not make it easier?

7 Ways to Deal with Annoying Coworkers Who Talk Too Much

Talking too much at work has real consequences for everyone involved.

Read through the following tips on how to improve your work situation for everyone. Make a note of those that stand out for you as most relevant or helpful.

This probably won’t be enough for those who think, “Oh, but we’re friends, so they won’t mind if I pop in to say Hi.”

The problem? They start with “Hi,” and several minutes later, you realize you haven’t gotten any work done. And they’re showing no signs of wrapping things up.

You’re allowed to hold up a finger and let them know you’re in work mode right now but will talk to them later. You can even put up a sign that advertises the times when you’re able and willing to socialize.

2. Look for the good in them — but be clear about what you need.

Not everyone can read body language or facial expressions. And those who miss them aren’t necessarily more selfish or inconsiderate than the average person. They might just not realize how their tendency to chat nonstop affects the people around them.

Find something positive to appreciate in them before you interrupt their monologue. Then be clear about your need to get work done, while letting them know you look forward to catching up when you’re off the clock.

Your coworkers don’t need to be coddled with a compliment every time you need to bow out of a conversation. But keep their more endearing qualities in mind.

3. Explain how their interruptions and excessive talking is affecting you.

You have limited time to get your work done. And when you’re on the clock, you want to be as efficient and focused as possible. Any interruptions, however friendly, take you out of the zone and cost you more than the few minutes spent talking.

It takes time to get back into a flow state when someone’s monologue has yanked you right out of it. Let them know how much time these interruptions cost you — without openly blaming them for your compromised efficiency.

They need to know how serious you are about your work-related productivity goals. If this coworker wants to be a friend, they should respect that.

4. Listen for the reason behind their talkativeness.

Sure, some folks talk too much because they honestly see themselves as more interesting than anyone else. They ramble on and on about their journey to self-discovery, while remaining blind, deaf, or indifferent to the struggles of those around them.

But most of those who go overboard with talking do so for reasons like the following:

Listen for what’s behind the chattiness before you jump to conclusions about your coworker. It might not be about their ego.

What Is A Bubbly Personality? And Is It A Good Thing?

5. Ask if you can interrupt.

Politely ask if you can interrupt them, especially if they’re jumping from one tangent to another. If they insist on finishing to make their point clearer, you can say, “Oh, I thought you’d already made it. Let me just repeat what I’m hearing so far.”

Once you’ve started talking, if they interrupt or talk over you, tell them you’d like to finish your thought. Make it clear you understand what they’re saying (in a few words).

If you’re going through (or have gone through) something similar, you can take a moment to briefly share or allude to that. Then let them know you’ll be able to talk more later — after you’ve had a chance to get your work done.

6. Set boundaries and enforce them.

You’re allowed to have boundaries and to enforce them without coworkers abusing you for it. You’re not “antisocial” if you choose to do work (instead of socialize) when you’re on the clock.

It doesn’t mean you can never talk when you’re working, but it does mean that talking shouldn’t compromise your productivity and your attention to detail.

Coworkers who don’t respect your need to get work done well and in a timely manner create problems for everyone. It’s not on you to make them feel as if listening to them is your number one priority.

7. Talk to your manager.

If a coworker keeps violating your boundaries — expecting you to make an exception for them, because “I thought we were friends” or “This is work-related!” — it may be time to discuss the situation with your supervisor.

After all, they’re invested in making sure everyone is doing their job. You’re not doing this to get your chatty coworker in trouble. A good supervisor will want to address anything that makes the work environment more stressful than it has to be.

Ask for their help in dealing with this. They may have a solution you haven’t considered.

What is excessive talking a symptom of?

Talking too much can be a symptom of more than one possible cause:

To know how best to deal with a coworker who talks too much, look beyond the chattiness to the root cause.

Why do coworkers talk so much?

Now that we’ve identified possible causes for excessive chattiness, it’s up to you to get some clarity on which one is the best fit for a coworker you have in mind.

The better you know that cause, the easier it is to know how to deal with them.

You’ll respond differently, for example, with a coworker who’s a narcissist than you would with one who gets chatty when they’re feeling nervous or overwhelmed.

With the latter, you’re more likely to be patient and to look for ways to help them feel calmer.

How do you ignore annoying coworkers?

If you have a coworker (or coworkers) who continually push against your boundaries, ask your supervisor about wearing noise-canceling headphones (if the job allows) to make it easier to tune out chatty coworkers.

Keep those above you aware of the situation and ask for their help in dealing with it. They want the workplace to run smoothly — with happy, efficient employees — so they’ll want to know if something is making that more difficult.

Now that you know how to deal with coworkers who talk too much, which of the tips listed above stood out for you? And what will you differently the next time a chatty coworker interrupts your workflow?