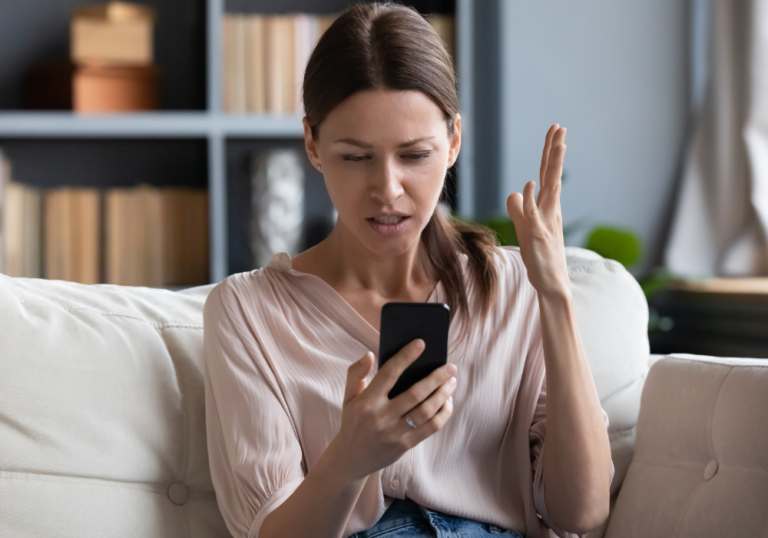 One day, everything is going great between you and the guy you’re dating.

The next day, he vanishes.

He’s nowhere to be found, and you’re left with the question: “Is he ghosting me?”

Because of technology, ghosting has reached epidemic levels and shows no signs of stopping; as such, building resilience to protect your self-esteem has become a must.

After all, ghosting can hurt.

To that end, let’s talk about what ghosting is and why people do it.

What Does Ghosting Say About a Person?

The term came into prominence around 2014. At first, it strictly referred to when one person in a romantic relationship suddenly cut off all communication with their partner.

Today, though, ghosting is used more generally and can apply to friendships and workplace situations.

Technically, ghosting is cutting off all communication with someone without an explanation.

It’s grown in popularity over the past half-decade. One study suggested that 78% of people say they’ve been ghosted. But another research endeavor concluded that only 30% of people readily admit to ghosting another individual. When a guy ghosts you, it stings.

Some people can get over it quickly, but others take it tremendously hard, to the point where it affects their mental health.

What does ghosting say about someone’s character?

Why Did He Ghost Me? 11 Likely Reasons to Consider

Have you ever found yourself incredulously telling your friends and family, “He ghosted me!” Don’t worry; you’re not alone. So why do guys ghost?

Our culture is fertile ground for ghosting because so many men (and women) don’t have the maturity to handle uncomfortable situations.

He doesn’t want conflict, so he disappears without explanation when a romantic partner doesn’t meet his ideal standards.

You know for sure that ghosting is confusing for multiple reasons:

To help you navigate this challenging time, let’s look at 11 possible reasons he ghosted you.

1. He Has Commitment Issues

Most men, women, and non-binary people deal with commitment phobia at some point in their lives.

Maybe we’re too young to be in a serious relationship. Or perhaps we have yet to deal with personal baggage rooted in our childhood, traumas, or past relationships that went left.

In these situations, the minute you try to define the relationship, the person you’re dating may get cold feet. Mixed signals commence, and before you know it, your love interest has disappeared from the face of the Earth.

And yes, guys who pursue you one day may ghost you the next.

You can usually pinpoint potential future problems if he:

Some people are cowardly or have an intense fear of confrontation. Simply put, they’re incapable of holding their ground.

While avoidance is understandable in some situations, it’s also a trait people should strive to overcome because it makes relationships much more difficult.

Guys who fall into this category often convince themselves that they’re doing you a favor and sparing you embarrassment by ghosting. They don’t understand how insensitive and rude it can be.

Men who are uncertain about what they want in life are fond of ghosting. They don’t want to end things officially; instead, they’d rather keep you in the wings if they change their minds down the road.

After all, they may decide you’re the person of their dreams in a matter of months. So instead of explaining themselves, they say nothing, hoping you won’t notice.

You may be the most intelligent, attractive, kindest person in the world. But if there’s no spark, there’s little you can do to turn things around.

A lack of chemistry often leads to ghosting, and he forgets about you the minute you part ways.

This type of ghosting usually happens at the beginning of a relationship, and it’s wise not to take it too personally.

5. He Believes You’re Not Into Him

Some guys are cripplingly insecure and terrified of rejection.

If you find yourself dating someone in this category, they may attempt to “dump” you before you get a chance to “dump” them.

This type of ghosting is a symptom of miscommunication, and you can sometimes remedy it. If you think this is the case, try sending an apology for something you did that could have been misconstrued. If he responds, great! If not, move on.

Everyone has deal breakers — i.e., something they can’t get past. For some, it’s cheating or lying. For others, it may be something as minor as one of his friends not liking you.

Whatever the case, it’s an insurmountable obstacle.

Try not to sweat it. There are other fish in the proverbial sea.

7. Not the Right Time

Did he tell you from the start that he’s only interested in a casual relationship? Have you been trying to push the limits? If so, he may get antsy.

Sure, it’s fine for people not to want a major commitment at a particular time. But the good guys will show you a little respect by making a clean break instead of letting things linger.

8. You’re Too Clingy and Intense

One of the most unattractive traits is clinginess. Bluntly stated, it’s like kryptonite for guys.

Most of them can’t stand emotional outbursts and super-intense behaviors, like constant texting or calling. Some men also can’t stand when a potential mate gets drunk whenever they hang out.

If he feels you’re coming on too strong or expect too much, too soon, you may find yourself ghosted.

In these cases, don’t become someone you’re not attempting to please him. You are who you are. The right person will eventually come along — or not. Hey, there’s absolutely nothing wrong with being single. Many people who don’t couple up live exciting, passionate lives.

9. He Met Someone Else

Some men resort to ghosting if an old flame comes back into their lives or they find someone they like better.

Instead of being upfront, they disappear. In some instances, they simply don’t know how to tell you. Other times, they’re afraid to reach out because they don’t want the other person to discover they were dating around.

10. You Made Him Uncomfortable

Ninety percent of the time, ghosting is rude and immature, but sometimes it’s justified. If you were aggressive or violent on a date, he might decide it’s best to leave you alone for his protection.

In these situations, it’s essential to take responsibility for your actions.

11. Something Happened to Them

In worst-case scenarios, something may have happened to your guy. He may have gotten in a car accident or had a death in the family.

These cases are a matter of fate, and you shouldn’t take them personally under any circumstances.

Named after everybody’s “favorite ghost,” caspering is the term for “friendly ghosting.” People who “Casper” will send a polite message to break things off.

It may read something like: “Thank you for a lovely evening. I hope everything works out for you, but I don’t think we’re a love match. Good luck!”

It’s short, sweet, to the point — and a much better option than ghosting.

In most cases, ghosting signals that someone isn’t for you. As such, be glad you dodged a bullet.

So the next time it happens to you, look at the ghosting as a blessing and move on. After all, you don’t need to waste your time with someone who lacks basic respect.