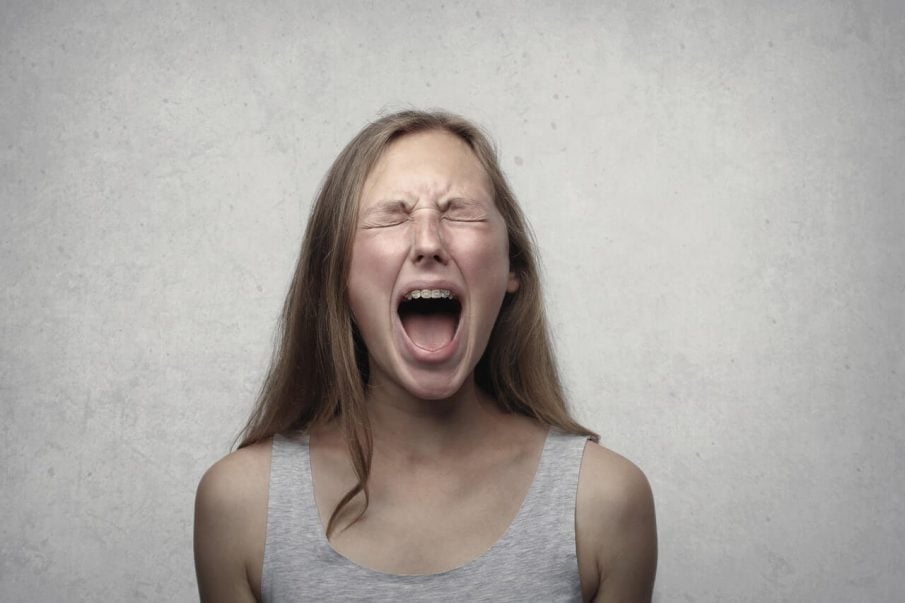 We all have that one little thing that just grinds our gears no matter how irrational.

Many of us have the same pet peeves, providing a universal language for kvetching.

However, some of us are so bothered by inconsequential behaviors that we may begin to wonder if we are the only ones.

You may even be wondering if any of your little ticks are the cause of someone else’s headache.

If so, we have put together a list of 91 popular pet peeves that get on people’s nerves.

What Are Pet Peeves?

A pet peeve is a particular something that you find especially annoying. Some annoyances become fostered over time.

We give them so much attention that they become, well, our own little pets.

However, without the fur and the adorable face, pet peeves are never endearing.

Our biggest pet peeves can be the smallest things — from a sneeze to the tapping of a pen.

Although, the worst annoyances can ruin our whole day. Especially if someone eats your last fry!

We know them when we see them, but we don’t always remember when someone asks “What are your pet peeves?”

This is a fairly common question on a first date or at a party, but you may not have an answer right off the bat. You may even be worried your pet peeves are too weird.

Luckily, we’ve compiled a list of pet peeves that many of us have in common. Here are a few common pet peeves examples:

1. People who don’t wash their hands after coughing into them.

2. When people sneeze or cough without covering their mouths with their elbow.

3. When someone eats off of your plate without asking. Get your own fries!

4. When someone says “no offense but” right before saying something hurtful as if that makes it better.

5. Someone who always shows up late and keeps you waiting for them.

6. Large groups who take up the whole sidewalk and never move over for passersby.

7. The sound of chalk writing on a chalkboard.

8. When someone scrapes their fork or knife on a plate and it makes a horrible noise.

9. When you are in the middle of saying something, and someone talks over you.

10. People who burp in public without covering their mouths.

11. When you make a joke, and then someone makes the same joke but louder and the whole room laughs.

12. When someone watches a video on their phone at full volume without headphones in public.

13. People who chew with their mouths open.

14. Someone who apologizes but doesn’t actually apologize, saying something like, “I’m sorry if you were upset.”

15. Dog owners who don’t clean up after their dogs on a walk.

16. Cashiers who are overly chatty when you’re in a rush.

17. When someone vapes inside, especially around non-smokers.

18. Someone who spends way too much time on their phone in a social situation instead of being present.

19. People who use the “reply-all” option to respond to a work email.

20. People who refer to themselves in the third person.

21. People who slam their feet on the ground when they walk or any type of loud walker.

23. When men think they are flirting, but they are really just being creepy.

24. People who block the door on an elevator and don’t move out of the way.

25. Anyone who claps when the plane lands or at the end of a movie.

26. When someone doesn’t turn off their phone at a movie or at least put it on silent.

27. Someone who tries to push their fad diet onto you. Sorry friend, pizza is too great to give up.

28. Someone who responds to texts with only memes or emojis.

29. People who smack their gum or blow gum bubbles in front of you.

30. Someone who uses “literally” in a non-literal situation.

31. When a co-worker cc’s your boss on every email they send you.

32. Anyone who says “you should have been there” to rub in the fact that you weren’t there for all the fun they had.

34. Bad grammar is the worst, especially when people use “your” in place of “you’re.”

35. People who always talk while chewing their food, or chew with their mouths open.

36. It’s always the know-it-alls who never seem to know when to stop talking!

37. When no one responds all day, but as soon as you hit the hay, you’re hit with a million texts.

38. Finding out the person who never texts you back always has their phone in their hands.

40. The one wet spot on the kitchen floor seems to always find you when you have socks on!

41. Definition of a hypocrite: someone who conveniently forgets everything wrong with them in order to reveal what’s wrong with you.

42. Having to have patience for impatient people.

43. Seeing movies with people who quote the lines as they happen. It’s like seeing the movie twice, at once!

45. Parents trying to be cool. The ultimate oxymoron.

46. When kids get to eat pizza and chicken nuggets, but it’s cheating when adults do it.

47. When customer service tells you that your call is “really important to us,” but then you have to listen to forty minutes of elevator music.

48. When the middle of my sentence interrupts the start of yours.

49. Why can’t shampoo and conditioner run out at the same time?

50. I hate it when people call me a dumb blonde, it really gets on my pet peeves.

How To Confront A Cheating Spouse Or Partner

How To Forgive Someone And Let Go Of Anger

51. There’s nothing worse than a partner who’s unreliable, never picks up the phone, or is always late.

52. When he or she constantly compares your relationship to other people’s.

53. When your partner is clearly upset but they just say “I’m fine.”

54. Having a partner who uses the silent treatment to win a fight or get their way.

55. Some people are non-confrontational, but it’s never great when your boyfriend or girlfriend walks away in the middle of a fight.

56. When people assume that your partner’s opinions are the same as your own.

57. When your partner speaks for you when someone asks you a question.

58. Noticing that your partner acts differently around their family or friends than when it’s just you and him or her.

59. When they are a little bit too close with their last ex, or worse, all of them.

60. When your partner overshares about you to their friends. Some things should be kept between the couple!

61. A partner who gets upset about alone time. Sometimes you just need some space.

62. When one person in the relationship makes all of the decisions as if their partner doesn’t have autonomy.

63. Watching your significant other being rude to someone can feel like your responsibility. The secondhand embarrassment can be overwhelming.

64. When your boyfriend or girlfriend is being passive-aggressive but won’t tell you what’s on their mind.

65. A partner who doesn’t know how to apologize or never admits to doing something wrong.

66. Someone who is always jealous of your same-sex friendships.

67. Partners who make ultimatums to get their way.

68. People who go out of their way to try to significantly change their significant other.

69. When your significant other compares you to an ex in a fight. Some things should be off-limits.

70. A boyfriend or girlfriend who refuses to ask for help even when they need it.

71. Hearing “I told you so” when you admit to being wrong.

72. When you run out of hot water because they take too long in the shower.

73. When they don’t clean up after themselves and expect you to do all the work.

75. When someone farts in public and doesn’t acknowledge it. Reveal yourself!

76. People who have dirt under their fingernails. Do you wash your hands?

78. Repetitive noises can be so annoying, like when someone clicks their pen over and over.

79. Stickers on fruit. They always seem to haunt you weeks later, stuck on something totally random.

80. People who mutter under their breath while they read or look at their phones.

81. The sound and feel of pebbles when you walk on them.

82. Whistling may be cheery, but gosh, it can be so annoying.

83. Some people hate it when different foods touch on the same plate.

84. Breathing is a natural part of life, but a huge pet peeve is when people breathe too loud.

86. Standing in line and the person behind you is way too close. You move up, they move up. You move up again, and there they are breathing in your ear.

87. When people stop at the closest gas pump, effectively blocking the next one.

88. The goosebumps on your legs after you shave them.

89. Anyone who speaks in a high-pitched voice when talking to dogs or babies.

90. People who abbreviate every word in their text messages.

91. When people leave belongings in the passenger seat. Should I sit in the backseat?

What are your pet peeves?

We often encounter these little everyday annoyances, but some pet peeves are worse than others, leaving your whole day to ruin.

Fortunately, many of these bothersome behaviors are so common that we have the option to commiserate together. Pet peeves are great fodder for a venting session among friends or bonding with a new acquaintance.

There’s nothing more relieving than finding out your friends hate the exact same thing as you. You know what they say: if you can’t beat ‘em, complain about them!