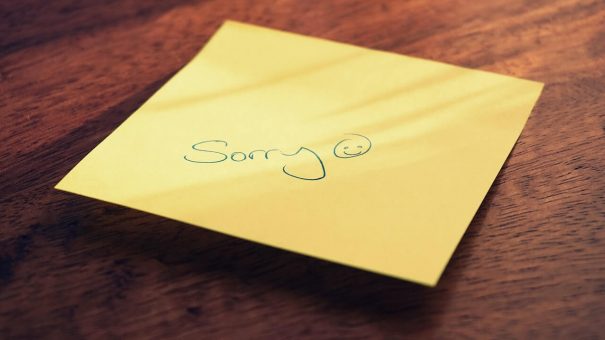 What are the two most difficult words to speak out loud?

It’s so hard to admit you screwed up — and painful to realize you did something to cause someone else disappointment or suffering.

And it’s even more difficult to acknowledge you let yourself down and fell short of your own standards of integrity, kindness, professionalism, or love.

As hard as these words are to speak, they are two of the most important words to pass from your brain to your vocal cords.

You must speak these words for your own self-respect and to protect (or rebuild) a relationship.

But sometimes it takes a little more than two words to fully communicate your regret and remorse for your actions.

Use the following 61 “I’m Sorry” quotes to inspire you craft the exact words you want to say to express your contrition.

2. “Mistakes are always forgivable if one has the courage to admit them.” ― Bruce Lee

3. “Sorry means you leave yourself open, to embrace or to ridicule or to revenge. Sorry is a question that begs forgiveness, because the metronome of a good heart won’t settle until things are set right and true. Sorry doesn’t take things back, but it pushes things forward. It bridges the gap. Sorry is a sacrament. It’s an offering. A gift.” ― Craig Silvey

4. “It’s always best to ask for forgiveness if you feel that you made a mistake. And again, asking for forgiveness is not just saying the words ‘I’m sorry’; it is also offering what you need to do.” ― Grace Poe

5. “Let us forgive each other – only then will we live in peace.” ― Leo Tolstoy

7. “Admitting a mistake is not a weakness; on the contrary, it shows an openness of your heart. It takes guts to say sorry. Only a strong and well-balanced individual with the clarity of mind can do so effortlessly. Taking responsibility for your actions requires and develops your self-control. You become your own person.“ ― Vishwas Chavan

9. “A genuine apology is like an eleventh-hour rain on a dusty crop. Grossly overdue, but miraculously just in time.” ― Jacqueline A Bussie

10. “An apology is saying the right thing after doing the wrong thing.” ― Vikrant Parsai

11. “Forgiveness is not an occasional act, it is a constant attitude.” ― Martin Luther King Jr.

12. “It is always so simple, and so complicating, to accept an apology.” ― Michael Chabon

13. “What is past is past, there is a future left to all men, who have the virtue to repent and the energy to atone.” ― Edward G. Bulwer-Lytton

14. “A truly humble apology works to part storm clouds, calm rough seas, and bring on the soft lights of dawn; it has the power to change a person’s world.” ― Richelle E. Goodrich

16. “Sometimes we learn the most about forgiveness when we realize how desperately we need it ourselves.” ― Glad Munaiseche

17. “Apologize quickly when you wrong someone, because I’m sorry has no value in the grave.” ― Lakesha Ruise

18. “Just because we’re friends, doesn’t mean I shouldn’t have to say sorry. You deserve that respect.” ― Dorothy Koomson

19. “It takes a great deal of character strength to apologize quickly out of one’s heart rather than out of pity. A person must possess himself and have a deep sense of security in fundamental principles and values in order to genuinely apologize.” ― Stephan Covey

20. “Truly saying sorry is never easy to do, and when you are, you just hope it’s not too late.” ― Justin Tranter

21. “The longer you hold onto an apology, the harder it is to give.” ― David Arnold

22. “I have learned that sometimes “sorry” is not enough. Sometimes you actually have to change.” ― Claire London

26. “A sincere and warmly-expressed apology can produce the same effects as morphine on a suffering soul.” ― Richelle E. Goodrich

99 Of The Best Quotes About Having Regrets

101 Of The Best Deep and Meaningful Quotes

28. “Apologize! That’s the least you can do to try to make right something you have wronged.” ― Sanhita Baruah

29. “I believe that when you’re wrong, own it and apologize, and so I do and put it on the equivalent of my front page.” ― Peter Coyote

31. “Apologies are great, but they don’t really change anything. You know what does? Action.” ― Stella Young

32. “To err is human, but contrition felt for the crime distinguishes the virtuous from the wicked.” ― Vittorio Alfieri

34. “I am so sorry. I wish you knew even one tenth of one percent of how sorry I am… It was my fault.” ― Laurie Halse Anderson

35. “My mother had told me to never be afraid to apologize when I was wrong. She had said it would have saved her and my father a great deal of trouble if they had only followed that rule. Then she had sighed, and added that I must never think that an apology could completely erase what I had done or said. Still, it was worth trying.” ― Robin Hobb

36. “One does not need to apologize for you to forgive them…but a sincere, reverent and “as loud as the disrespect” apology may repair trust faster. Remember that when you apologize yourself.” ― Richie Norton

37. “Love is saying you’re sorry. It’s the opposite of those cherub posters that say, ‘Love is never having to say you’re sorry.’ Wrong! Love is three sorrys a day. If you haven’t met that quota, something’s wrong.” ― Diane Lane

38. “Saying ‘I’m sorry’ is saying ‘I love you’ with a wounded heart in one hand and your smothered pride in the other.” ― Richelle E. Goodrich

39. “In order for there to be peace it may mean that a person needs to apologize for a wrong spirit, or attitude.” ― Stanford Murrell

42. “When you apologize for your mistakes and subsequently make an effort to correct them, you not only impart to your offspring the importance of taking responsibility for your actions, but also demonstrate the opportunity to learn from such mistakes.” ― Bethany Bridges

43. “Even though you’d rather not, this means that you are willing to accept to step back and humble yourself. Maybe you will have to accept blame for a situation you did not create, or you may have to apologize even though you did nothing wrong. But, the real point is that everyone faces a relationship mountain sooner or later and that it is up to the individual who sees the mountain to initiate the resolution.” ― Byron Pulsifer

45. “Forgiveness is not always easy. At times, it feels more painful than the wound we suffered, to forgive the one that inflicted it. And yet, there is no peace without forgiveness.” ― Marianne Williamson

46. “The bitterest tears shed over graves are for words left unsaid and for deeds left undone.” ― Harriet Beecher Stowe

47. “Apologies require taking full responsibility. No half-truths, no partial admissions, no rationalizations, no finger pointing, and no justifications belong in any apology.” ― Cathy Burnham Martin

49. “Apologizing does not always mean you’re wrong and the other person is right. It just means you value your relationship more than your ego.” ― Mark Matthews

51. “If you make mistakes in your organisation, it’s worth saying sorry, as that builds trust and reduces surplus fear of making mistakes.” ― Paul Z. Jackson

52. “Forgiveness to me doesn’t mean accepting someone’s apology. It means understanding fully that a person made a mistake but is worthy of a second chance.” ― Nishan Panwar

53. “Actions speak louder than words. We can apologize over and over, but if our actions don’t change, the words become meaningless.” ― Unknown

54. “Sorry’ is, indeed, one of the most difficult and most powerful words in the English language, provided one can feel and say it at the same time. It’s difficult because you sincerely need to feel the pain of the other person and rise above your ego to say it; it’s powerful because you overwhelm the other with the opposite reaction of what they were expecting.” ― Uday Mukerji

55. “But sorry is the Kool-Aid of human emotions. True sorrow is as rare as true love.” ― Stephen King

59. “Apologies have the power to heal humiliations and grudges, remove the desire for vengeance, and generate forgiveness on the part of the offended parties.” ― Aaron Lazare

60. “The bitterest tears shed over graves are for words left unsaid and for deeds left undone.” ― Harriet Beecher Stowe

61. “When an apology is due, give it freely, then follow your apology with action.” ― Judy Ford

What are your next steps after reading these “I’m sorry” quotes?

Is it time for you to make a sincere apology to someone you’ve offended?

Or are you reading these quotes because someone has offended you, and you need an apology from him or her?

Leaving a hurtful situation unaddressed only makes the remorse deeper for the offender and the pain more profound for the injured party.

Whether you owe an apology or are owed one, take a step to rectify the situation.

Talk about your pain if you were hurt or let down by someone. Let the person know how you feel, even if he or she should have known and apologized already. Don’t let the wound fester.

Allow your integrity and compassion be the guiding light of your actions today and every day.

Be strong enough to be vulnerable and acknowledge your failings when you must.