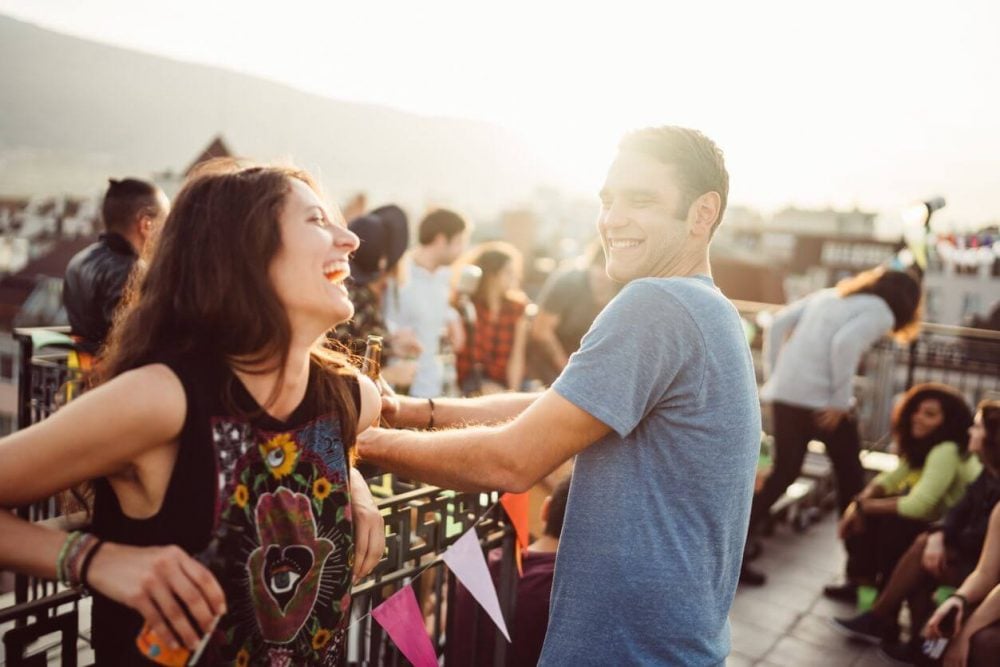 Have you been wondering if one of the men you know likes you?

Are you hoping that he likes you, but you don’t want to misinterpret things?

Pre-romantic interactions are filled with questions.

Both parties are uncertain and hoping to avoid spoiling a chance at happiness.

In general, men have an intense fear of rejection, especially in the realm of dating.

The big NO brands them with failure in the biological arena where they desperately want to succeed.

To know where you stand with this guy, you need to decide, “Is he scared of rejection or not interested?”

How Do Guys Act When They Are Falling in Love and Are Scared?

Mixed signals come from feelings of fear and attraction.

One day he is chatty with you, and the next day he walks away quickly, trying to avoid you.

He probably feels like he said something stupid and wants to prevent making things worse while he plots a new strategy for impressing you.

Signs a guy likes you but is intimidated:

Sometimes when a guy avoids you but likes you, he is weighing the risks and benefits of pursuing a relationship, and he hasn’t reached a conclusion yet.

Although he likes you, he remains hesitant to put his feelings out there because he could get hurt.

21 Signs He Likes You But Is Afraid of Rejection

When a man feels rejected, his self-worth takes a big hit, and he’ll need time to recover. He may even feel shame.

These are challenging emotions for anyone, and he’ll really want to avoid them. That motivation could cause him to bottle up his true feelings, but his actions will tell a different story.

1. He’s quick to answer your requests for help.

It could be simple things, like getting a box off a shelf at work or feeding your cat when you’re gone for the weekend. Whenever you appear in need of assistance, he is ready to make your life easier.

Behavior like this indicates that he’s interested in you, but he doesn’t feel confident about taking the next step and asking you out. You’re left wondering if he’s just a nice, friendly bloke or secretly in love with you.

2. You catch him looking at you a lot.

He’s not giving you a creepy, predatory stare, but you know that he was looking at you and not the basketball game on the screen behind you.

When this happens more and more, you can bet that you are the object of his desire. Whether he does more than look longingly in your direction though, is anyone’s guess.

3. He always has something nice to say about you.

He admires you and is on the lookout for opportunities to have a positive conversation with you. He might compliment your clothes or hair, but the compliments might not be about your physical attributes.

He could say you handled a tough situation well or praise your ability to play a game. Men aren’t much inclined to praise women they aren’t interested in.

When he compliments you regularly, he could very well be attracted to you.

4. His friends know who you are.

His friends recognize you when you meet them. This is because he has been talking about you.

When his bros ask him what girl is on his mind, your name is the answer. If his friends or colleagues know you more than you know them, then you’ve got a strong sign that he likes you.

He definitely sees things your way. He agrees that the criticism you received at work was unfair. He speaks up on your behalf if someone speaks ill of you.

This guy is a member of your fan club whether you realized you had one or not.

6. He asks for your advice.

Asking someone for advice is a perfect reason to start a conversation, and he needs reasons to do this, right?

This behavior also shows that he values your opinion. It’s a relatively safe conversation because he doesn’t have to bring up the subject of asking you out and risking rejection.

7. He’s eager to spend time with you.

If you can count on him making appearances in your social circle, you can bet that he’s there for a reason, and it could be you.

If his heart weren’t throbbing for someone in your social circle, he would probably focus his attention in more directions.

8. He does things to impress you.

Whether his bold and spontaneous actions impress you will be an open question, but he’s trying to be memorable.

An outside perspective can alert you to obvious things. Others see his feelings for you waving like a huge flag over a car dealership, but you’ve got him in the friend zone wittingly or unwittingly.

When other people want to know if you guys are dating, then maybe you should consider it.

10. He laughs when you make jokes.

You are a legendary comedian to him. All of your cute comments and snide remarks make him chuckle. Maybe you are a great wit, and he has the brilliance to appreciate it.

Most likely, you both have average senses of humor, but he jumps on every opportunity to share a laugh with you. It’s a gentle and safe way to be emotionally intimate without actually risking rejection.

11. He is vague if you ask him about his love life.

Even if he had relationships in the past, he avoids them as topics of conversation around you. He does not want you to think of him with other people because he wants to be your boyfriend.

12. You find yourself confiding in him.

He has established himself as someone safe to talk to. He genuinely cares about your problems and does not gossip about you.

13. He won’t be scrolling through his phone around you.

We use our phones to keep us company when we’re bored. When you’re talking to him, though, he doesn’t care about a text or notification.

That screen does not tempt him because he has your attention right now, and everything else can wait. All of the dopamine-inducing bells and whistles from Silicon Valley have just been trumped by your presence.

14. He talks vaguely about a future with the right lady.

He may be testing the waters to see how you respond to his hypothetical aspirations. He wants to make it known that he hopes to find love but may not yet have the courage to ask you out.

15. He flirts with you regularly.

He flirts. You flirt back, but neither of you makes plans for a date. The longer that this goes on, the more likely it is that he likes you.

He could be trying to develop the perfect plan for asking you out, but his fear of rejection always keeps things in the planning stage.

16. He remembers what you say.

When he can refer back to earlier conversations and even quote you, the man has been paying attention. You matter to him.

17. His mood drops if you mention dating someone else.

You went on a date with someone else. This news will devastate him, and he can’t hide it entirely.

This information may be the bump he needs to ask you out or continue wallowing in self-doubt. It could go either way.

18. You feel the chemistry when you’re around him.

No one has mentioned going on a date, but both of you are happy around each other and feel an attraction.

He’ll naturally move to block the wind when you walk together on a cold day. He moves closer if someone is creeping you out at a party.

He cares about you and wants to be in a position to shield you from discomfort or harm.

You just smacked his arm playfully when he said something funny, and he lit up with joy.

He may not touch you back because he doesn’t want to seem aggressive, but that bit of contact with you made his day.

You are the subject of your conversations. He’s curious to know more.

Part of this behavior is to see if you will be receptive to any advances, should he make them, but he also wants to look for deal-breakers before deciding to ask you out.

Getting the Cold Shoulder

The cold shoulder is a common sign a guy feels rejected by you. When a male friend or acquaintance goes from being fun and attentive to avoiding you, he probably feels rejected.

Whether or not he voiced his feelings for you, he decided that you were not into him. Now he’s trying to withdraw and protect himself from harm.

If you’re not interested in him, accept his withdrawal for now, even if you like him as a friend.

But if his cold shoulder bothers you, maybe you should try encouraging his attention. He might welcome the second chance.