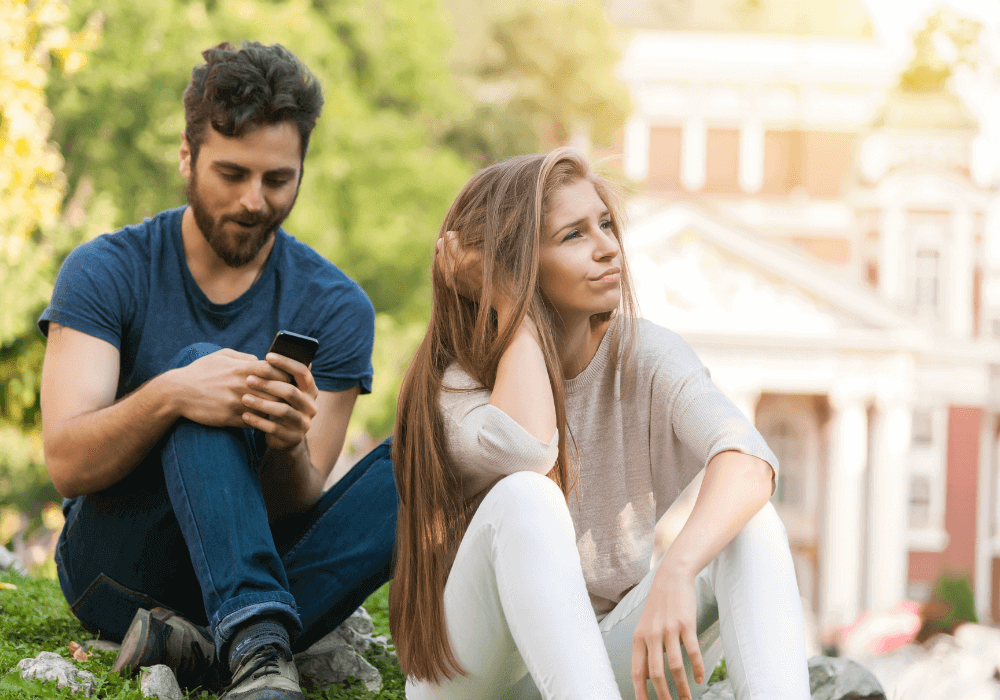 Are you bored with your boyfriend?

And is there at least a chance that the feeling is mutual?

Or is your need for excitement or novelty pushing him away?

It’s not unusual for couples to start out mad for each other, only for one of them to decide, at some point, that their partner has gotten boring.

In this post, we’re focusing on boyfriends whose boring behavior has you wondering whether your relationship is doomed.

When did he get so boring?

How Does a Boring Boyfriend Behave?

If you’re muttering to yourself, “My boyfriend is so boring,” you’ve probably noticed one or more of the following behaviors in him:

Depending on the man in question, more than one reason might explain the boring behaviors:

Some guys become “boring” because they’re so busy trying to earn enough to support the lifestyle they want — or that their significant other wants — they don’t have energy left over for fun.

If you suspect this is the case, talk to him about what you can both do to change that.

My Boyfriend Is Boring: 7 Ways to Shake Things Up

The good news is that you can do things when your boyfriend is boring to spice up the relationship and bring the fun back. That said, if your boyfriend has been “boring” for as long as you’ve known him, you’ll see some helpful tips further on.

1. Dig deeper to find the reason behind his boring behavior.

Before you try to make your boyfriend less boring (i.e., “fix” him or his habits), consider whether his boring behavior and your frustration might have the same origin: your relationship.

In other words, his behavior as an unattached single may have been anything but boring. It could be he’s not happy and is doing what he can to salvage the situation since he no longer feels a need to win you over or impress you.

He could also be hoping (on some level) that you’ll take the hint and leave. But you won’t know what’s really going on until you two talk it out.

2. Find a hobby you can both enjoy.

See if there’s a hobby you’d both enjoy working on together. If the conversation between you has grown dull and monosyllabic (or one-track-focused), and you want a deeper connection, make a list of hobbies you would enjoy trying with him.

Then show him your list and ask if any of the hobbies sound appealing to him.

Let him know how important it is to you to find an activity (other than the obvious) you can enjoy together to grow closer and find more things to talk about.

3. Find enjoyment (and growth opportunities) outside your relationship.

It’s not entirely up to your boyfriend to keep the romance alive. If you’re bored and craving excitement, consider picking up a hobby or a project of your own. Your boyfriend may show interest in what you’re doing and ask if he can join you.

Even if he doesn’t, though, you have a right to pursue something of your own that nurtures you and helps you grow. You might find, after spending time on your pursuit, that your boyfriend isn’t as boring as you thought.

4. Add some variety to your time together.

If you’re bored, there’s a good chance he is, too. And it’s not all on him to make the relationship as stimulating as it could be. Try any of the following to add some variety to your time together:

5. Insist on a daily sit-down talk.

Catch up on how the day went for both of you. Share any funny or interesting stories you might have. And empathize with your partner when he talks about a difficult or particularly draining experience.

If he doesn’t want to talk to you, and he’s not willing to make time for daily conversations with you (even short ones), take that for the red flag it is.

Your relationship has got more significant problems than boredom.

In most cases, it’s perfectly healthy for both of you to have something you can enjoy on your own, without needing the other person’s participation to make it worthwhile. You need to be able to enjoy something without the other.

You need your own things. And sometimes you need your own space entirely apart from each other. Give yourself a chance to miss him. Distance (in moderation) can make the heart grow fonder.

If your partner insists on doing everything with you (or vice-versa), you’re in red flag territory and headed for relationship burnout.

7. Revisit what attracted you to him in the first place.

Think back to your relationship’s early days and the things he did and said that won you over. Remember why you fell for him in the first place. He’s still the same guy, even if you don’t often get to see his romantic side.

Maybe what you need is a chance to remind you both how much fun you had together.

Focus on a common interest and play to his strengths, as well as yours. Make time for something that meets you both where you are and refreshes you both.

Whatever you do, don’t use guilt to bully him into doing something he’d rather not do.

If you’re bored with your relationship, certain questions — like the ones you’ll see below — tend to crop up again and again.

It’s just your brain doing its thing to figure out what to do about a situation you don’t like.

We hope these answers help you take the next right step.

1. Is it normal to be bored in a relationship?

It’s pretty normal for relationships to go through dry spells, especially when you’re both often tired or stressed from work and other concerns.

Consider what’s at the root of the boredom. And be careful to describe the behavior, rather than the person, as “boring.”

2. Is it normal to be bored of your boyfriend?

People get bored easily. Even if your boyfriend is doing the same things that thrilled you before, at some point, you think, “Meh. Turn the page, already.”

You want novelty, and he’s not supplying it. Because, like you, he doesn’t read minds. Talk to him.

3. How do you deal with a boring boyfriend?

Find out why his behavior lately has been boring before you talk to him about it, and beware of putting all the blame on him.

He may see nothing wrong with behavior you see as dull or sad. Get clear on what both of you want before you decide your next steps.

4. How do you spice up a boring boyfriend?

Again, he may be perfectly content with his current level of spiciness.

But if you think it couldn’t hurt to crank up the dial a bit, get to know him and his love language better, and talk to him about yours, so you can both understand what the other wants.

5. What if your boyfriend is fine with his “boring” behavior?

If he doesn’t see anything wrong with the way he’s acting, and he thinks your expectations of him are unreasonable, there are two possibilities: 1) he’s right, and 2) he’s more attached to his “boring” habits than he is to you.

In either case, breaking up might be the best solution for you both.

75 Rainy Day Date Ideas To Salvage Your Plans For Fun

Now that you know what to do when your boyfriend is boring, what will you do differently today or this week when you feel bored with your relationship?

Or what can you do instead of wondering how to fix someone who probably doesn’t need (or want) fixing?

You know your relationship better than we do. And the best thing you can do right now is to talk to your boyfriend about your concerns.

The deeper your understanding of the situation, the easier it is to know what to do.