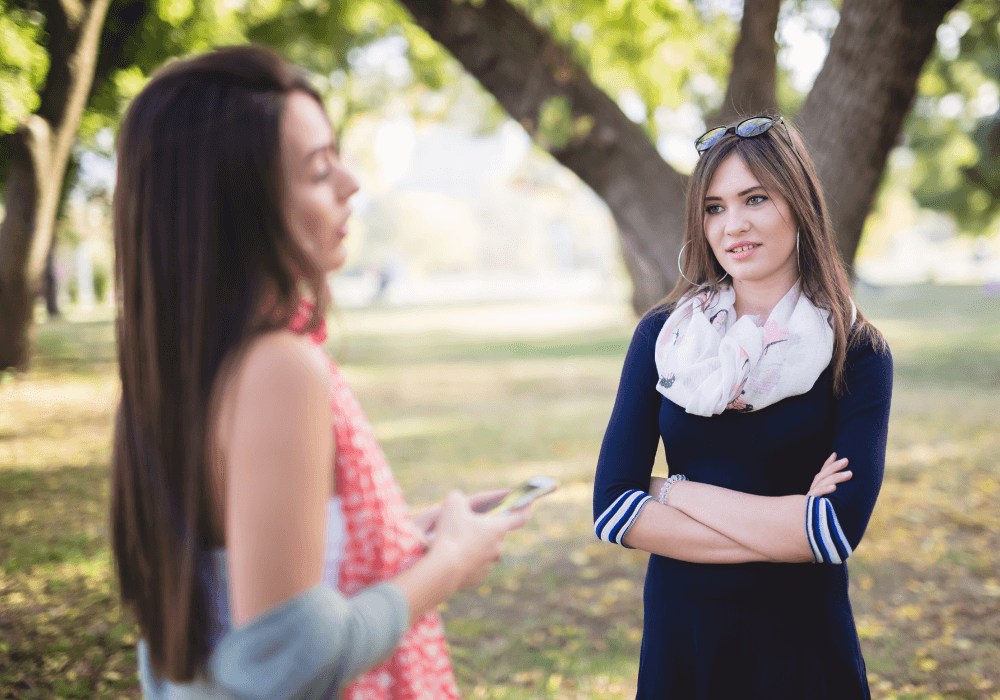 Every single human adult on the planet lies.

Some would even argue that living a lie-free life is impossible.

We lie to spare feelings and avoid conflict, and sometimes, in complex situations, fibbing is the lesser of two evils.

But being lied to by someone you love about something important often crosses the ethical Rubicon.

When a friend lies to you, it hurts.

When a lover lies to you, it can downright burn.

So today, we’re looking at what to do when someone in your life lies right to your face.

Why Do People Lie to Your Face?

People lie for many reasons, and in many instances, we do it because the instinctual survivor sludge inside every human still holds sway over our actions.

Over decades, psychologists and social scientists have whittled the human tendency for lying down to nine motivations.

How Do You Respond When You Know Someone Is Lying?

Sometimes, we know, beyond a shadow of a doubt, that someone is prevaricating right in our face.

So the question becomes: what should you do when it happens?

Learning how to react when someone lies to you is a worthwhile endeavor that will come in handy throughout your life.

Ultimately, there are three main tacts you can take when it comes to fielding lies.

Every situation is different and calls for a nuanced response that fits the scenario.

When Someone Lies to You and You Know the Truth

“OK,” you say, “I get it. Everyone lies; some lies are worse than others, and there are three overarching reactions to dealing with them. But specific examples of how to confront a liar would be helpful!”

For you, we’ve curated this list of 11 ways to respond when know someone is lying to your face.

Yes, lies hurt. But before growing irate, assess the situational specifics. Did the person lie for a “good” reason? What is the impact of the lie? Have you told a similar lie in the past? (Be honest with yourself.)

At the end of the day, not every battle is worth fighting. Life is short and stressful enough. If the lie in question is not a big deal, consider just letting it go.

Walking away doesn’t mean you must forgive or forget. By all means, use the information to decide how you interact with the person in the future.

But it’s perfectly acceptable to save yourself the energy and just let it go.

Playing dumb is another way to handle a bald-faced lie. Pose questions the lying party will have difficulty answering without tripping up. This is a great tactic to use when you don’t want to address the pink elephant directly.

A little laugh can go a long way — especially in awkward situations.

If the lie in question isn’t severe, turning the situation into a joke can deflate the tension lying creates. For example, you could quickly move away from someone who speaks an untruth. When they ask, “Why?” say something along the lines of: “Are you kidding me!? I don’t want to get struck by lightning!”

The most straightforward way to deal with someone lying to your face is to call their bluff.

This can be exceptionally difficult for conflict-averse people. If that’s you, consider practicing. Stand up for yourself in the mirror! Get used to how it feels. That way, when the moment arrives, you’ll be ready.

If you’re going to confront the person directly, it may not be the best idea to do it in a crowded place, especially if you’re uncertain how they’ll react. Are they an aggressive person who will cause a scene?

Are they a narcissist who may feel threatened and cause bigger problems? Or is it safer for you if the confrontation takes place in public? Weigh all these considerations before acting, and prioritize your safety!

As we mentioned above, everybody lies. It can be hard to admit — and we humans have a funny way of justifying our own prevarications while judging other folks for theirs.

So with that in mind, why not try a bit of empathy?

Instead of pointing fingers and attacking your adversary with moral rage, lead with a confession. Lay the table with your faults, which will make the other person feel more comfortable, causing them to open up and hopefully apologize for lying straight to your face.

From that point, a more honest relationship can sprout.

6. Kill Them With Kindness

Have you ever seen the Disney classic “The Sound of Music”? It’s about a plucky, upstart governess named Maria who shakes things up at the house of an austere Austrian captain at the start of World War II. There are seven children to care for, you see, and 99% of them are a bit naughty.

So on Maria’s first night, the kids prank her badly. We’re talking reptiles in pockets, people. But instead of ratting out the little urchins at dinner, Maria gives a long speech about how “grateful” she was for the “present” they’d left her.

By the time Maria was done, all the kids were weeping tears of guilt, and Maria gained the children’s trust and respect.

If you ever can use the “Maria Method,” give it a try. It also works on adults.

Give the liar a chance to correct themselves. Look them in the eyes and ask if they’re sure they’re not mistaken. Use this approach when you have the “goods” to follow up with facts that disprove their statement.

Also, try to make it clear from the start that you’re giving them one more opportunity to come clean before exposing the truth.

Occasionally, a situation will arise where you know someone is lying but don’t necessarily want the perpetrator to get in trouble. Maybe it’s a justified lie; perhaps the punishment would far outweigh the untruth. Whatever the case, you’re on the liar’s side.

When someone lies to you in these situations, and you want to be an ally, you can plant an alternate scenario in their head and lead them to go along with your version.

Make it evident that you’re on their side by tilting your head and using an inflection that implores them to go along with whatever you say.

9. Use the “Columbo” Method

Between 1968 and 1989, Frank Columbo, of “Columbo” fame, was America’s favorite TV detective. A disheveled workaholic, Columbo was a master of disarming people.

He’d lull suspects into a state of overconfidence by framing himself as a bumbling fool — and then he’d hit them with tough questions or undeniable evidence that exposed the killer’s lies.

Granted, the Columbo method is super dramatic. But sometimes, a little spectacle is warranted.

Everyone has emotions, and appealing to them is an excellent way to crack another person’s proverbial shell. If a loved one is telling you bald-faced lies, let them know that it crushes your feelings when they do it.

Understand, however, that this method only works if the lying person truly loves you. After all, if you don’t share an attachment to someone, it’s much easier to lie to them. Think about it: would you care if someone you didn’t like was mad at you?

Sometimes, it pays to ask for a bit of time to think something over. If someone lies to your face, and you’re not sure what to make of the situation, it’s perfectly acceptable to tell the person you must think about things and that you’ll contact them at a later date.

This is an excellent option for people who are confused about a situation. It also gives the lying party time to come clean on their own.

What to Say to Someone Who Lies to You

We’ve reviewed the various ways you can deal with someone who lies to your face. Now let’s dive into some opening salvos — the specific phrases to use when you want to tell someone you know they’re lying.

Lying isn’t a virtue — but it’s also an inescapable part of life. So when someone hands you a bald-faced prevarication, think before you react. Weigh the situation and choose an appropriate response based on the lie’s impact.