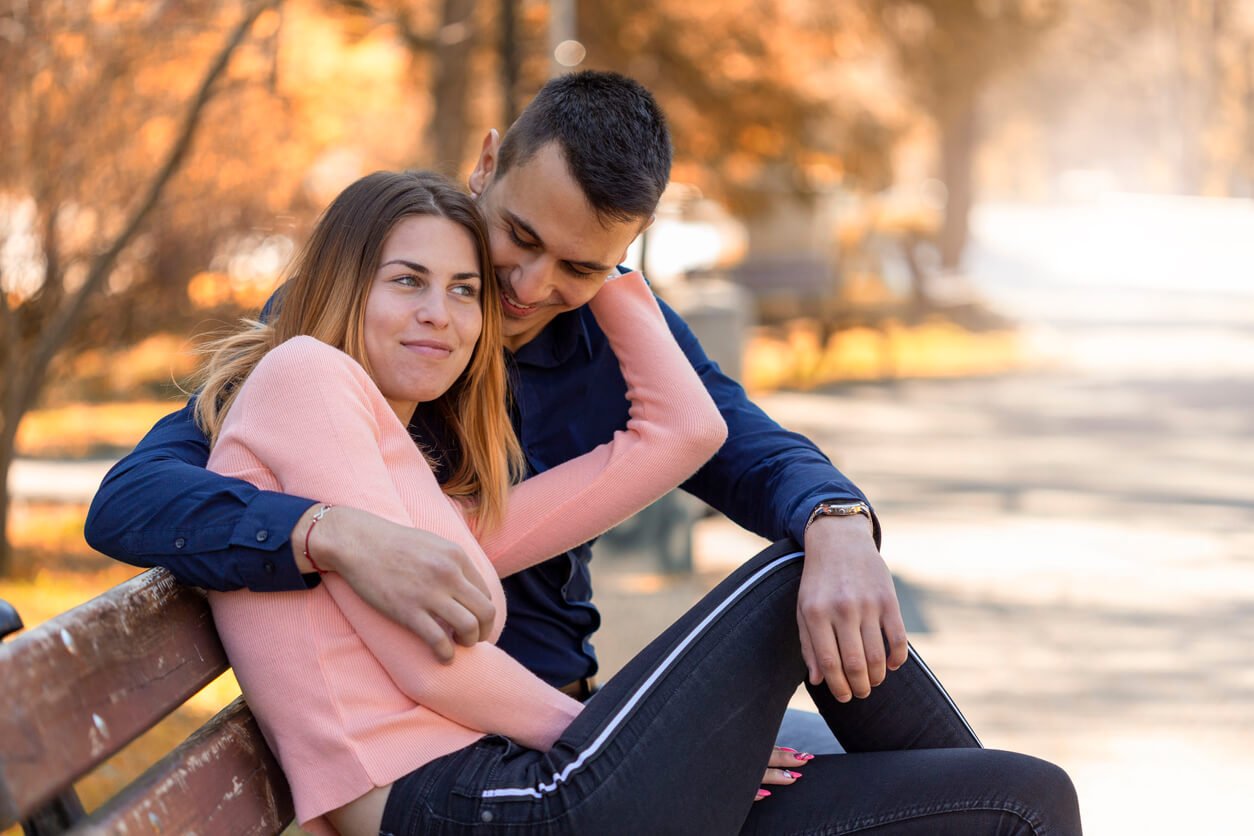 The gut butterflies have arrived, and you’re definitely into him.

But where’s his head?

Is he feeling your vibe?

Does he see you as a potential long-term partner or just a fun date-mate for the time being?

We’re here to help you get inside his head and figure it out!

To that end, we’ve curated a list of questions to ask a guy to see if he’s interested.

So grab a beverage, and let’s dive in.

With any luck, by the end, you’ll know how to ask a guy if he’s serious about you.

How Can You Tell a Guy’s True Intentions?

What are the signs of a guy’s true intentions? Sure, men are all different — but if truth be told, it’s pretty easy to figure out how they feel about potential romantic partners. If he’s into you, he’ll probably:

19 Critical Questions to Ask A Guy to Know His Intentions

The questions you ask to determine his intentions will depend on the relationship’s status.

Have you passed the 10-date milestone yet? How did you meet? Was it on a dating app that focuses on hook-ups or finding “the one”?

Your details also matter. Is your biological clock pounding? Are you looking for someone with similar religious values?

The last thing you want to do is scare off someone early on with hyper aggressiveness. During these nascent days, keep things general and vague.

In the overwhelming majority of cases, talk of marriage, babies, and moving in together should be shelved during this initial stage. However, there are ways to subtly suss out what he’s thinking.

1. What Are You Looking for in a Partner?

This question should probably wait till at least the third date, but at that point, it’s perfectly acceptable to ask what he’s looking for in a partner. Pay attention to the answer.

If he describes a situation that doesn’t fit your life, take note. It may be an indicator that he only sees you as someone fun to date, for now.

2. Where Do You See Yourself in Five Years?

The five-year question is standard fare, and you shouldn’t worry about asking it. If in five years, he sees himself newly married with a kid on the way, and that’s what you’re looking for too, then it may be a match.

If his vision involves heading out in an RV on a trip from Fairbanks to Patagonia, his wanderlust may be stronger than his willingness to commit.

However, age matters. Our hypothetical continental drive makes perfect sense for someone in their 20s — or retirees. But if a guy is still prioritizing adventuring in his 30s and 40s, you may need to dig a little deeper to discover if it’s an all-consuming passion that will trump settling down.

There’s nothing wrong with adventuring, but if you’re looking to mosey down the house-kids-car-pool path, it may be a miss-match.

3. Are You Dating Anyone Else?

This one is another question best left for date three or later. The first two outings should be as stress- and obligation-free as possible. But by date three — before potentially getting intimate — it’s perfectly acceptable to ask if he’s dating around.

His answer will give you a clue about where you fit into his life at this early point.

Don’t get discouraged if he’s seeing other folks. You never know what will happen in a few more dates.

4. If You Could Have Three Wishes for the Next Year, What Would They Be?

This is an easygoing question that, at face value, seems like an innocent conversation starter. But his answers may be revealing and provide insight.

Do his wishes align with yours? Or does one of the wishes include spending six months at a solitary meditation retreat?

5. What’s Your Main Priority in Life?

Again, asking someone about their life priorities is pretty standard fare. Additionally, it’s a window into his state of mind. Is he all about his career, all the time? Or does he mention time with his family and friends?

Hopefully, your priorities will match or at least complement one another’s.

6. Are a Lot of Your Friends Married or in Serious Relationships?

This is another question you may want to save until the third date. But it’s a good one to deploy earlier in the cycle. The response will paint a vivid picture of the guy’s lifestyle and whether it includes room for a serious relationship.

After ten dates, it’s fair to start asking more direct questions about your fella’s intentions and where the relationship is headed.

After ten dates, this is a perfectly reasonable question. If he gets agitated, parting ways may be the right answer. After all, do you want to spend years accommodating a commitment-phobe — only for him to marry another person after three months of dating them?

8. How Do You Feel About the Status of Our Relationship?

Asking about the status of a relationship is an indirect way of being forthcoming.

This is a good alternative that elicits the same information for those who may feel uncomfortable directly asking where a relationship is headed. It’s straightforward and provides insight into a person’s intentions.

9. How Do You Feel About Marriage?

Marriage is a gigantic step, but by the 10th date, asking your partner how they feel about the institution is fair — especially if you’re not spring chickens and kids are on your bucket list. If he sputters and chafes at the mere mention of a spousal union, it may be time to pack your bags.

If someone’s been in love before, it suggests they’re capable of making the journey down Cupid’s Lane again.

However, don’t count out folks who’ve never experienced the sensation — especially if you’re in your 20s.

Conversely, if you’re in your 50s, and the person you’ve been dating for months says he’s never been in love, you may be dealing with someone who is either allergic to commitment or pathologically self-absorbed.

Digging into past relationships makes sense after a few months. After all, you want to make sure this guy isn’t the next Dirty John! Try not to judge him for failed relationships, though. There’s a difference between psychopathic con artists and people who’ve been unlucky in love.

Nevertheless, this question can provide insight into how he feels about you compared to his last romantic entanglement.

You’ve been dating for a few months, you’re both gainfully employed adults, so perhaps it’s time to take a vacation together? Broach the topic and see where it goes.

Does it make him uncomfortable, or is he all for it? If it’s the former, he may not be feeling you as much as you’d like. The latter, however, augurs well for the relationship.

13. Have You Told Your Friends About Me Yet?

If you’ve been on more than seven dates and he has yet to tell his friends about you, something is awry. Typically, men start talking about people they’re into between the second and fourth dates.

101 Of The Best Flirty Questions To Ask A Guy

Niche Dating Questions to Ask a Guy to Know His Intentions

Not everyone follows the mainstream dating formula. Ultra-religious people may court instead of date, and a modern-day libertine’s idea of partnership may fall outside the Overton Window.

Or, perhaps, you’re just at a stage in your life where beating around the bush is a waste of time. If you fall into one of these niche categories, when and how you ask intention questions may be a tad different.

14. Do Your Religious Beliefs Inform Your Dating Relationships? Is Religion Important to You?

Is religion a central part of your life? Would you never consider being with someone who didn’t share your exact values? What if they practiced another faith?

If it’s an issue, get this question out of the way sooner rather than later. The answer will determine if you’re compatible, which is the first step of any successful partnership.

Many people in their 30s and early 40s are on a biological timeline. They don’t have time to waste, and they’re not shy about wanting to start a family. If you fall into this category, you may want to ask someone you’re dating early on if they want kids.

If they say no, knowing full well that baby-making is one of your top priorities, that crystal clarifies his intentions toward you.

16. What Are Your Marriage Deal-Breakers?

This question is appropriate for people who’ve been dating a long time but still haven’t discussed marriage. It’s a good way to let your boyfriend know that marriage is something you think about.

If he freaks out at the suggestion, his behavior may indicate that he never intends to, as they say, “put a ring on it.”

17. How Do You Feel About Kody from “Sister Wives”?

Thanks to The Learning Channel, Kody Brown is the nation’s most famous polygamous. For years, he’s welcomed America into his living room via the show “Sister Wives,” and we all got a front-row seat to his authoritarianism and favoritism.

So, if the guy you’re dating knows who Kody is and likes him, it may be a red flag. Because in the long run, someone who is that self-absorbed may never truly be capable of having “good” intentions toward any person but themselves.

More traditional people may feel it’s important to meet someone’s family toward the beginning of a courtship. For these couples, a clear indicator that he may not be interested in you is if he doesn’t want to make the introductions.

19. What’s Your Stance on Polyamory and Open Relationships?

Increasingly, more couples are exploring open relationships and polyamory. If it’s a lifestyle you’re interested in pursuing, uncovering your potential partner’s stance on the matter is of paramount importance.

If he’s not into it, he probably won’t be overly jazzed if you are, which will likely affect his intentions toward you.

When Should You Ask a Guy What His Intentions Are?

Sometimes, being upfront and directly asking, “What are your intentions toward me?” is the best route.

But we promise you that the first date is not the right time to do this.

So what is the right timing? After all, you don’t want to come across as moving too quickly, but you also don’t want to linger in the casual-dating zone for too long.

To that end, we’ve devised a few guidelines.

Most of all, remember to have fun! The beginning stages of a relationship are diverting. Relish every moment!

Even if it doesn’t work out, dating is an experience that can render lots of lessons. So enjoy, pay attention, and be yourself!