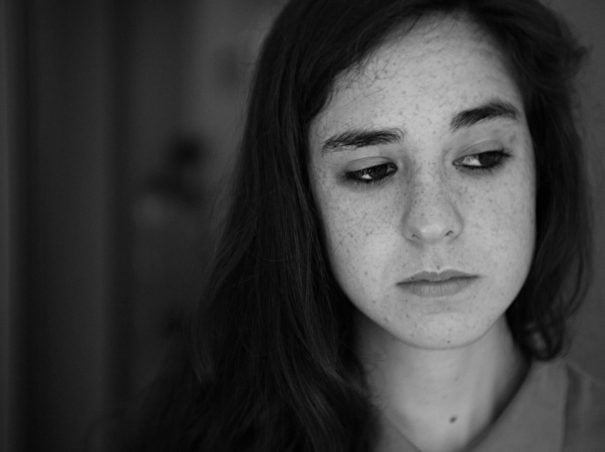 Through the fog of fear and shame, a woman who is a victim of abuse doesn’t see a clear way to extricate herself. She often feels she is to blame for the abuse or that leaving the relationship will make her life worse than it is.

You might think abuse only occurs to a certain kind of women, someone who isn’t smart or educated enough to get out of harm’s way and leave the relationship. But domestic abuse is far more common than you think.

According to an article in Time magazine, “One in four women experience domestic abuse in their lifetime, and it is one of the most chronically underreported crimes: only about one quarter of all physical assaults, one fifth of all rapes and one half of all stalkings are reported to the police.”

These statistics don’t include other forms of abuse like verbal assaults and emotional abuse. Throw those in the mix, and it’s likely some form of domestic abuse is happening to you or someone close to you.

In fact, emotional abuse can be more difficult to escape from for many women. The manipulation, isolation, verbal assaults, and passive-aggressive behaviors don’t leave physical scars that others can see. The abuser often denies his abuse and tries to place the blame on his victim. This form of abuse erodes the victim’s sense of self-worth and judgement. It is almost a form of brainwashing that keeps a woman bound to the person who causes her suffering.

Our society reinforces a women’s shame and fear of leaving an abusive relationship by suggesting she is culpable for the abuse or by judging her inability to extricate herself. An important part of ending domestic abuse is through education and awareness for everyone, not just the victims.

Why do women stay in abusive relationships? Here are 9 of the most common reasons:

The most compelling reason women stay in abusive relationships is because they are afraid. Abusers are all about control, and often when a women exerts control over her own life, the violence escalates. More than 70% of domestic violence injuries and murders happen after the victim has left the relationship.

When a woman fears for her safety, the safety of her children or family, or her own reputation or livelihood, staying in the abusive relationship feels like the only alternative.

Leaving an abusive relationship is much more difficult when children are involved. A woman might feel unable to support her children on her own, or she might fear for her children’s well-being and safety if she leaves.

She might experience guilt about taking her children away from their father or breaking up the family. Their may be threats by the abuser that he will turn the children against his partner if she leaves.

Also, he might get joint custody of the children, and she fears leaving them alone with him. Or she wants to serve as a buffer to protect her children from her abuser’s anger and violence.

If the abuse has gone on for some time, a woman’s self-esteem erodes to the point that she feels she deserves the abuse.

She might feel she isn’t good enough for someone who treats her kindly, with love and respect. Or she might be brainwashed by her partner to believe she can’t cope without him.

Some women feel the familiarity of abuse is better than the unknowns of life outside of the relationship. Things might be worse than they are with the abuser.

Feeling shame about the abuse is another reason women stay. They don’t want to expose the abuse and their own tolerance of it to friends and family by leaving their partner.

According to the U.S. Department of Health and Human Services, “peers, family members, and others in the community (e.g., coworkers, social service-providers, police, or clergy) minimize or ignore the abuse and fail to provide consequences.” Victims are often shamed or admonished about the relationship rather than offered help and support.

4. The Abuser Prevents Them From Leaving

An abusive partner can go to great extremes to control and isolate his victim. He might take her cellphone or car keys to keep her isolated at home.He might cut her off financially or keep her on a very tight budget.

Some abusers have prevented friends and family from contacting their partners or have even physically prevented a woman from leaving the house.

They use fear and intimidation to prevent their partner from taking any action that might lead to exposure of the abuse or the end of the relationship.

For some women, an abusive relationship feels normal. They assume all intimate relationships involve some form of physical or psychological violence.

They may have grown up in an abusive family and observed their father abusing their mother. Or a woman may have experienced worse trauma than physical or emotional violence growing up.

If a woman was raped or violated by her father, she might confuse this violence for some form of love or acceptance from this powerful figure in her life.

Children don’t have the mental or emotional skills to cope with the pain and mixed messages they receive in an abusive household. They carry this confusion into their adult lives and find themselves choosing partners who repeat the twisted dynamics of their childhood experiences.

6. Attachment To Their Partner

An abusive relationship can begin as a loving relationship. A woman might fall in love with a caring, kind man whose controlling and violent tendencies don’t show up until later in the relationship.

The abuser isn’t always a “bad” person who is completely evil. The abuser may have suffered abuse himself. He may have low self-esteem or have no idea how to manage his feelings of anger, shame, or confusion.

This doesn’t excuse the abuse, but it reveals how complicated this kind of relationship can be. A woman can love and fear her partner at the same time. She longs for the man she knew when she first met her partner and remembers how amazing he can be. Many victims cling to the positive qualities of their abuser rather than to focus on the abuse.

The abuser might show just enough of his “good” side that his partner holds out hope that he will finally change and realize how much she loves him. She knows a good man is underneath the violence and control.

Physically abusive relationships often follow cycles of violence followed by extreme remorse by the abuser, a period of happiness and calm, and then an escalation of the abuse again. Over time the cycle gets shorter, with fewer days of calm before the storm.

A victim might also have cultural or religious beliefs that prevent her from leaving the relationship. She might feel her extended family or religious community will shun or shame her if she leaves her abuser. Or she might have a disability that makes her feel completely dependent on her abusive partner.

Some women prefer the crumbs of intimacy, sex, and companionship of the abusive partner to the potential loneliness of being alone.

7. Feeling Responsible For Their Partner

An abuser often tries to make their victim feel responsible for the abuser’s happiness and well-being. They may use false flattery, guilt-trips, blame, and violence to force the victim to cater to them and remain in the relationship.

The abuser might threaten that they will lose their job, commit suicide, or lose their family if the victim leaves them, and therefore it will all be the victim’s fault.

Abusers often target sensitive, kind women, and they have learned how to manipulate these women emotionally in order to keep them tied to the relationship. The woman feels sorry for her abusive partner, even though he is making her life miserable.

The abusive partner might suggest that if the woman stays and tries harder to be “better,” then the abuse will stop. But nothing is ever quite good enough, no matter how hard she may try.

In some situations, the abuser is unable or unwilling to work and depends on the victim for financial support. The victim feels guilty tossing him out, believing he has no other means of support.

A woman may feel financially dependent on her abuser, especially if he controls her access to money and if he’s the main breadwinner in the family.

He might threaten to cut her and the children off completely if she ends the relationship, leaving her destitute and homeless.

If she isn’t able to work or perceives she doesn’t have the skills or ability to make money, the victim feels trapped and helpless. This is particularly true for women who don’t have family members or supportive friends available to help her make the transition out of the relationship.

With no place to live, no job opportunities on the horizon, and no access to bank accounts, the woman sees no other option but to stay with the abuser.

Victims of long-term abuse will sometimes psychologically detach from the trauma in order to cope and will develop symptoms of post-traumatic stress (PTSD).

According to Psychology Today, “Many others suffer from post-traumatic stress syndrome, one symptom of which is dissociation, which often creates such profound detachment from the reality of the abuse that sufferers scarcely remember being hurt at all. Dissociating victims can’t leave the abuse because they aren’t psychologically present enough to recall the pain of what happened.”

Anyone who has suffered from trauma — and abuse is trauma — will eventually develop symptoms of PTSD. These symptoms include:

These symptoms make the victim feel further isolated and alienated from friends and family members. PTSD also makes it much more difficult to see the abuse for what it is and to have the courage and emotional energy to leave the relationship.

Understanding the reasons why women remain in abusive relationships is the starting point for helping them reclaim their lives and dignity.

If you are a victim, knowing that you aren’t just “weak,” selfish, or deserving of this treatment can give you the determination and fortitude to seek help and leave your abuser.

If you know a victim, recognizing all of the contributing factors and difficulty involved in ending an bad relationship will help you offer the understanding and support the victim so desperately needs.

If you fear for your own safety or the safety of someone you know, please contact 911 or The National Domestic Violence Hotline.

6 thoughts on “Why Do Women Stay In Bad Relationships?”