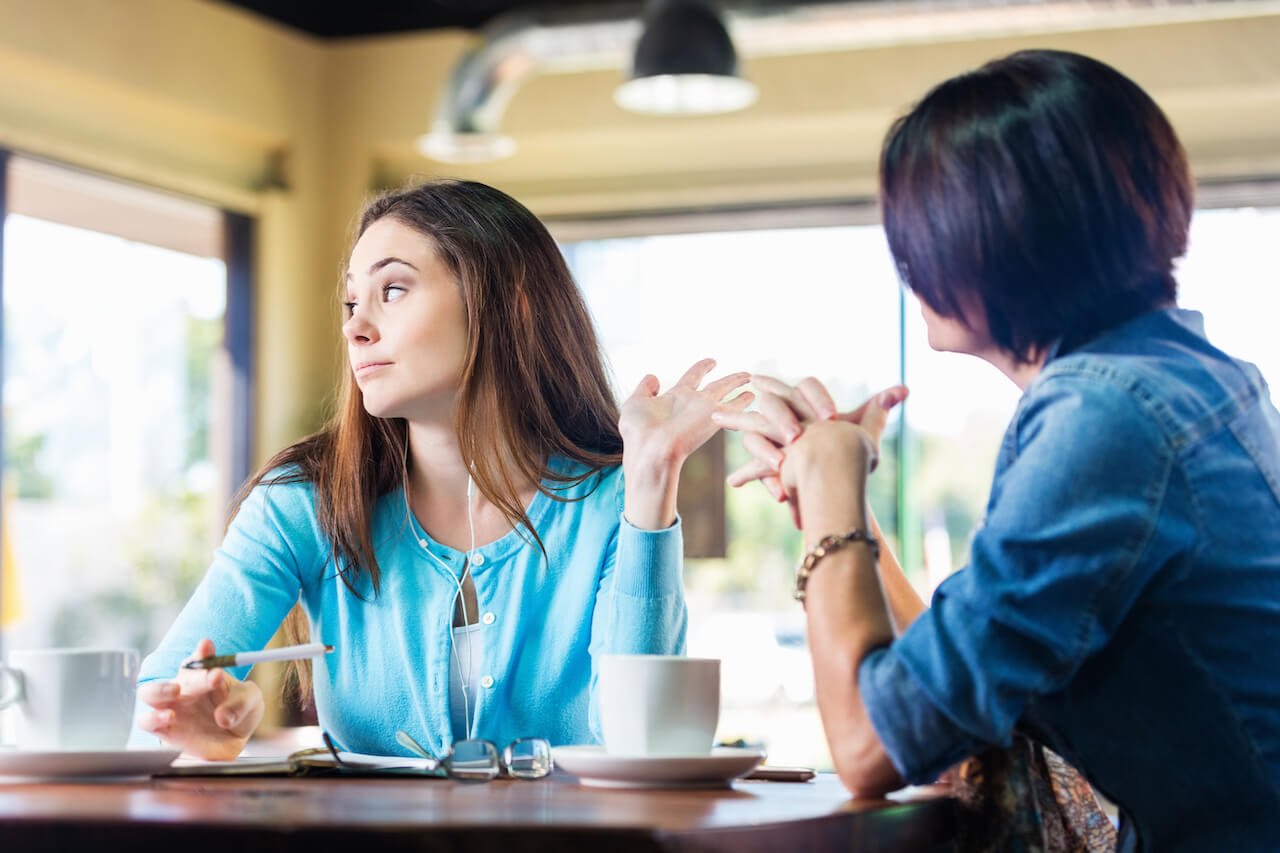 Without it, we humans would never have been able to coordinate efforts and build –.well, civilization itself!

However, just as you cannot force someone to love you, pushing folks to speak with you is also problematic.

But as an everyday, general rule of thumb, coercing anyone into doing something they don’t want to do is often unhelpful.

Today, we’re breaking down 13 reasons why it’s a bad idea to force people to talk to you.

What Is a Forced Conversation?

As the name suggests, a forced conversation is one you don’t want to have.

Since it’s something you’re doing against your will, it may make you feel:

Sometimes, forced conversations occur when one person has an unreciprocated romantic interest in the other party.

Other times, they can happen with a colleague, friend, or family member about a challenging or uncomfortable topic.

Should You Force Someone To Talk to You When You Really Need To Talk?

Whether it’s appropriate to force someone to talk to you is situationally dependent. For example, if you’re going through a difficult time, in most cases, it’s perfectly reasonable to expect close friends and family to support you and engage in conversations with you.

But compelling acquaintances, objects of your affection, or people you casually date to bear the burden of your personal challenges can be inappropriate. In those situations, it’s unacceptable to force someone to talk to you.

Not only does it create a cringe-worthy situation, but it has the power to diminish their opinion of you.

13 Reasons You Should Never Force Anyone To Talk to You

Communication is an art that involves analyzing several verbal and non-verbal cues. Part of the craft is determining when to broach certain topics and when you should let sleeping dogs lie.

So to sharpen your skills, let’s look at 13 reasons it’s not wise to force people to speak with you.

1. There May Be Mental Health Considerations

Thankfully, taboos against mental health issues are slowly eroding, yet many people still feel uncomfortable opening up about their conditions and struggles.

If someone doesn’t want to speak with you, it could be because they’re working through something, and the last thing you want to do is overburden them with pestering. It’s unkind, and it could be detrimental to their health!

Everyone isn’t for everyone. You don’t have to like every person who crosses your path, and they’re not obligated to like you!

Such is the way of the world, and when you try to force conversations with folks who aren’t feeling your vibe, it can come across as rude and embarrassing.

So save yourself the potential shame and keep moving. You’ll eventually find people with whom you fit. Besides, people who snub others usually aren’t worth the effort.

3. It May Put the Other Person in a Bad Situation

We rarely — if ever — know the inner workings of peoples’ lives, and in some instances, demanding a forced conversation could put them in a difficult — or even dangerous — situation.

What if they’re in a fraught relationship that they’re trying to end? What if their partner sees your communications and accuses them of cheating?

You never know what’s happening behind someone else’s curtain, so don’t push.

4. Unknown Circumstances May Be Preventing the Other Person From Talking to You

Unknown circumstances may prevent the person with whom you’re trying to speak from doing so.

What if they had a death in the family, and you’re aggressively blowing up their spot when they’re grieving with their family? Imagine if they were in a car accident and fighting for their life in a hospital bed.

The possibilities are endless.

And who knows, if you let it rest, they may circle back to you in a few weeks or months and explain why they couldn’t talk when you wanted.

5. The Conversation Won’t Be Satisfying to Either Party

Forced conversations are always awkward and uncomfortable — without exception! Even if you manage to get the person to sit down for a chat, there’s a 100% chance it won’t be a productive discussion. So why bother?

Life is finite. Time is precious.

Please don’t waste it trying to win over people with whom you don’t naturally click. Instead, spend your hours and days showering your loved ones with kindness, working on yourself, learning new things, and meeting new people.

7. Forcing Anything Weakens the Relationship

Don’t force anyone to do anything.

Generally speaking, it’s a good rule. After all, do you appreciate it when people try to twist your arm? Besides, forcing anything engenders mistrust and apprehension, weakening the relationship.

8. You Risk Damaging Your Self-Worth

Groveling and desperation are a turn-off, and people who do it sacrifice their reputations.

We probably could do some societal work on this front. Belittling, demeaning, or gossiping about people who are struggling is fundamentally unkind — but all too common; after all, people may be needy because they’re hurting.

But unfortunately, we’re not there yet. So when you try to force other people to do anything, they’ll judge you and may treat you harshly because of it, ultimately eroding your sense of self-worth.

9. You Cannot Force People To Love You

Understanding that you cannot force people to love you can be a hard lesson to learn, but it’s also one of the most important. It often goes hand-in-hand with discovering that infatuation isn’t love — and neither is lust.

It’s crushing when you like or care about someone, and they don’t feel the same way.

But the best way to get over it is to wallow with your friends and move on. Don’t reduce yourself to desperate clinging. The blunt and hard truth is that people will mock you for it.

Signs Of An Emotionally Unavailable Woman

15 Signs Of Emotional Detachment In A Relationship

Mystery is one of life’s great spices — especially in the early stages of romantic relationships. It may sound counterintuitive, but people crave what they can’t have. Humans love a challenge.

Forced conversations are the opposite of intriguing or tantalizingly elusive. So if your goal is to win someone over, chill out!

11. It Can Be a Form of Emotional Abuse

In worst-case scenarios, forcing someone into a conversation can qualify as emotional abuse — especially if there isn’t a way for them to refuse your advances or escape.

When one person wants to engage in a specific conversation and the other person doesn’t, the two parties are not on the same page.

In such situations, it’s nearly impossible to change the other person’s mind, and rehashing the same points only entrenches the discord.

13. It Can Cause a Bigger Fight

If the forced conversation is about resolving a disagreement, talking it out when the other person isn’t ready almost always widens the divide.

So let it rest for a bit. Put some time and space between you and the person you’re beefing with. It could make things easier when you finally sit down and talk things through.

What To Say to Someone Who Doesn’t Want To Talk To You?

For starters, try not to internalize it. You may very well be in the right. But also refrain from causing a scene or getting overly emotional. Instead, consider saying:

Some Caveats About Forced Conversations

Advising people to “never force anyone to talk to you” is a sweeping generalization that comes with several caveats.

As we mentioned above, it’s OK to put a little pressure on family and friends when you need help or want to clear the air about something. There’s nothing wrong with saying, “Hey, [Mom / Dad / Friend], I’d appreciate it if we could sit down and talk some things through.”

Constantly brushing issues under the carpet is not healthy, and it could ultimately ruin your relationship because problems fester in the dark.

Moreover, progress — on all levels — is a process of overcoming challenges, and doing that always involves hard conversations, both with other people and ourselves. Growth would be impossible if everyone clammed up constantly and refused to discuss uncomfortable issues.

Life is beyond complicated, and emotions are often inexplicable. So when navigating conflicts with loved ones, do your best to respect their boundaries and needs.

The key is finding an equitable communication balance that will keep your relationships functional, thoughtful, and healthy.