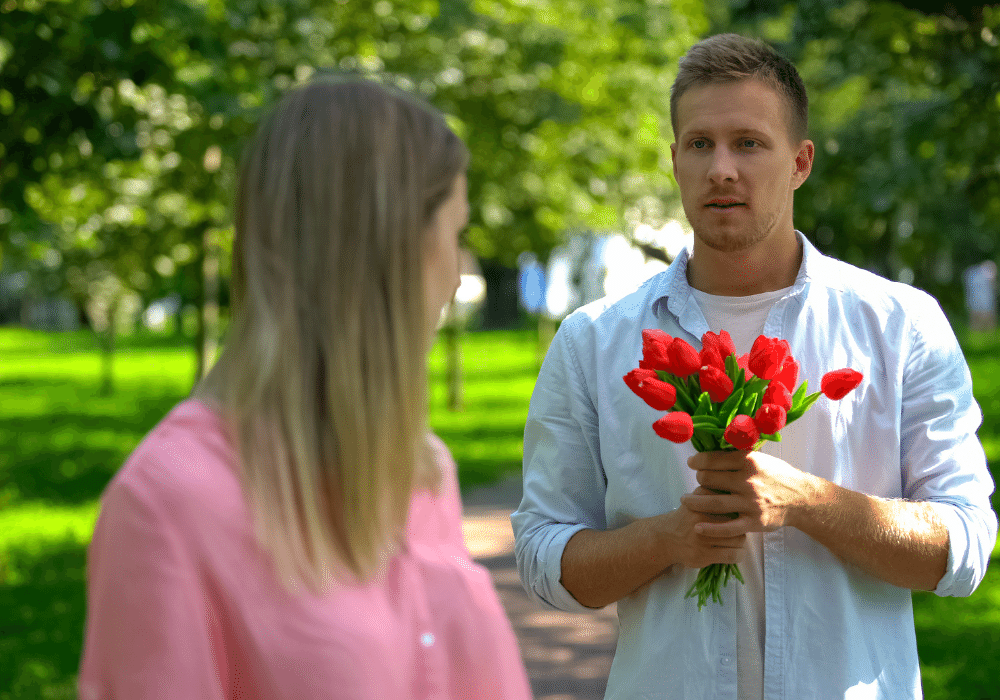 Few experiences hurt more than loving someone who doesn’t love you back.

You know you can’t force someone to feel what they don’t, but knowing this doesn’t lessen the pain of unfulfilled love.

Sometimes, though, it helps to know you’re not alone.

And you’re definitely not. Most of us will experience this pain at some point in our lives — many of us more than once.

So, we’ve collected the following unrequited love quotes from others who have been where you are.

Think of them as verbal hugs from us to you.

1. “The sun’s gone dim, and
The moon’s turned black;
For I loved him, and
He didn’t love back.”
― Dorothy Parker

2. “There is nothing so mortifying as to fall in love with someone who does not share one’s sentiments.” ― Georgette Heyer

3. “You just know something is amiss, when you look at someone and long for something that is not yours or you cannot have. It’s an absence–a loss of a heartbeat.” ― Nadège Richards

4. “Being in love with someone who doesn’t even know you exist isn’t the worst thing in the world. In fact, it’s quite the opposite. Almost like passing in a term paper that you know sucked, but having that period of time where you haven’t gotten your grade back yet — that kind of exhale where you haven’t been rejected, although you pretty much know how it’s going to turn out.” ― Tonya Hurley

5. “‘And my desire,’ he said, ‘is a desire that is as long as a year; but it is love given to an echo, the spending of grief on a wave, a lonely fight with a shadow, that is what my love and my desire have been to me.’” ― Augusta Gregory

6. “Unrequited love does not die; it’s only beaten down to a secret place where it hides, curled and wounded.” ― Elle Newmark

7. “The most confused you will ever get is when you try to convince your heart and spirit of something your mind knows is a lie.” ― Shannon L. Alder

8. “Unrequited love does not die; it’s only beaten down to a secret place where it hides, curled and wounded. For some unfortunates, it turns bitter and mean, and those who come after pay the price for the hurt done by the one who came before.” ― Ellie Newmark

9. “A mighty pain to love it is,
And ‘t is a pain that pain to miss;
But of all pains, the greatest pain
It is to love, but love in vain.”
― Abraham Cowley

10. “Sometimes you grow to love the shadow that follows.” ― Donna Lynn Hope

11. “Because what’s worse than knowing you want something, besides knowing you can never have it?” ― James Patterson

12. “With women who do not love us, as with the “dear departed,” the knowledge that there is no hope left does not prevent us from continuing to wait.” ― Marcel Proust

13. “The heart is stubborn. It holds onto love despite what sense and emotion tells it. And it is often, in the battle of those three, the most brilliant of all.” ― Alessandra Torre

14. “I didn’t want to fall in love with you. I knew the risk and understood the consequences. All the warning signs had been in bright blinking neon lights. Telling me to run before I even got near. But our hearts are animals driven by instinct: it only wants and wants and wants. Mine simply wanted you.” ― Theresa Mariz

15. “Let no one who loves be called altogether unhappy. Even love unreturned has its rainbow.” ― J.M. Barrie

16. “You know, unrequited love is very difficult? It’s not just having this one-sided love of someone who’s far away. Being close, talking daily, liking a guy who’s constantly near me is harder than it would be under different circumstances.” ― Park So Hee

17. “I thought of all the others who had tried to tie her to the ground and failed. So I resisted showing her the songs and poems I had written, knowing that too much truth can ruin a thing. And if that meant she wasn’t entirely mine, what of it? I would be the one she could always return to without fear of recrimination or question. So I did not try to win her and contented myself with playing a beautiful game. But there was always a part of me that hoped for more, and so there was a part of me that was always a fool.” ― Patrick Rothfuss

18. “The feelings that hurt most, the emotions that sting most, are those that are absurd – The longing for impossible things, precisely because they are impossible; nostalgia for what never was; the desire for what could have been; regret over not being someone else; dissatisfaction with the world’s existence. All these half-tones of the soul’s consciousness create in us a painful landscape, an eternal sunset of what we are.” ― Fernando Pessoa

19. “The saddest thing is to be a minute to someone, when you’ve made them your eternity.” ― Sanober Khan

20. “Thus much and more; and yet thou lov’st me not,
And never wilt! Love dwells not in our will.
Nor can I blame thee, though it be my lot
To strongly, wrongly, vainly love thee still.”
― Lord Byron

21. “Perfect behavior is born of complete indifference. Perhaps this is why we always love madly someone who treats us with indifference.” ― Cesare Pavese

22. “I have to admit, an unrequited love is so much better than a real one. I mean, it’s perfect… As long as something is never even started, you never have to worry about it ending. It has endless potential.” ― Sarah Dessen

23. “There was a man who loved the moon, but whenever he tried to embrace her, she broke into a thousand pieces and left him drenched, with empty arms.” ― Laini Taylor

24. “A person doesn’t know true hurt and suffering until they’ve felt the pain of falling in love with someone whose affections lie elsewhere.” ― Rose Gordon

25. “Maybe I was destined to forever fall in love with people I couldn’t have. Maybe there’s a whole assortment of impossible people waiting for me to find them. Waiting to make me feel the same impossibility over and over again.” ― Carol Rifka Brunt

26. “To burn with desire and keep quiet about it is the greatest punishment we can bring on ourselves.” ― Federico Garcia Lorca

27. “Because by immortalizing the pain of my unrequited love I am letting you go. This is me moving on the only way I know how.” ― Theresa Mariz

28. “I get what it’s like to want something, but to try and force yourself to really believe that you don’t.”
― Cora Carmack

29. “Unrequited love is the infinite curse of a lonely heart.” ― Christina Westover

30. “It’s as if I’ve stepped off the edge of a cliff, and even though my heart’s in my mouth and my stomach is in knots, I’m the most excited I’ve ever been in my life. I’m totally enthralled by him. I want him, every part of him, and I desperately want him to feel the same way about me.” ― Serena Grey

31. “Trying to get someone interested in us (who is not) is a painful and pointless endeavour. There are many people in the world. Some are for us. Most are not.” ― Donna Goddard

32. “‘You see,’ she concluded miserably, ‘when I can call like that to him across space–I belong to him. He doesn’t love me–he never will–but I belong to him.’” ― L.M. Montgomery

33. “Love may have the longest arms, but it can still fall short of an embrace.” ― Megan McCafferty

34. “Living with someone you love can be lonelier than living entirely alone, if the one that you love doesn’t love you.” ― Tennessee Williams

35. “Yet my longing for her was like a bad cold that had hung on for years despite my conviction that I was sure to get over it at any moment.” ― Donna Tartt

36. “All these years I’ve had a story in my mind, the story about us that never really existed. And because of that story, I’ve kept you framed up on the wall in a little box of nostalgic moonlight.” ― Cathleen Schine

37. “Because, if you could love someone, and keep loving them, without being loved back . . . then that love had to be real. It hurt too much to be anything else.” ― Sarah Cross

38. “It was hard to pour endless love into someone who wouldn’t love you back. No one could do it forever.” ― Zoje Stage

39. “Do you know what it’s like to like someone so much you can’t stand it and know that they’ll never feel the same way?”
― Jenny Han

42. “I’d always secretly believed that a love as fierce and true as mine would be rewarded in the end, and now I was being forced to accept the bitter truth.” ― Alma Katsu

43. “But, here was a curious thing. The more I tried to give up thinking of her, the more I said to myself, ‘She’s nothing to you’, the harder I tried to pluck the idea of her out of my heart, the more she stayed there.” ― Sarah Waters

45. “Problems can be fixed. But unrequited love is a tragedy.” ― Suzanne Harper

46. “She said she didn’t love him, and he said it didn’t matter, and the poverty of their words brought tears to their eyes.” ― Françoise Sagan

47. “The knowledge that she would never be loved in return acted upon her ideas as a tide acts upon cliffs.” ― Thornton Wilder

48. “If I love you, is that any of your business?” ― Johann Wolfgang von Goethe

49. “Let her remain where she is. A constellation away.” ― Eric Gamalinda

50. “Winter is much like unrequited love; cold and merciless.” ― Kellie Elmore

51. “When you love something, you have to make sure it loves you back, or you’ll bring about no end of trouble chasing it.” ― Patrick Rothfuss

52. “Somehow I’ve always wanted the ones that didn’t want me. I’m the absolute queen bee of unrequited love.” ― Iris Murdoch

53. “I fell for you and I fell hard. You bruised my knees and my heart to the point where I will do everything in my power never to fall for anyone again. It’s safer to stay on your feet. I would rather walk through life completely without love – empty; than crawl through what’s been pumping through my veins one more time.” ― Denice Envall

54. “If I could have had him, I could have let him go. But without the having there was nothing— so to the nothing I hold.” ― Coco J. Ginger

55. “Which is when I decided I would never love anyone again because you just felt like an idiot when you put love out there and it didn’t come back your way.” ― Karen Tayleur

56. “Nothing grieves more deeply or pathetically than one half of a great love that isn’t meant to be.” ― Gregory David Roberts

57. “And yet, because I love thee, I obtain
From that same love this vindicating grace,
To live on still in love, and yet in vain”
― Elizabeth Barrett Browning

59. “I think one of the most poignant things is unrequited love and loneliness.” ― Wilbur Smith

7 Key Steps In Taking A Break In A Relationship

30 Love Quotes To Light Your Flame

How To Deal With Rejection

Did these unrequited love quotes speak to you?

Now that you’ve had a chance to look over this list of unrequited love quotes, which will you want to remember when the pain is at its worst?

Here are a few tips that can help with this:

The more you train your mind to focus on what you still have, the better able you are to move on and open yourself to new people and experiences.

May you forgive the one who can’t feel as you do and find someone who does.