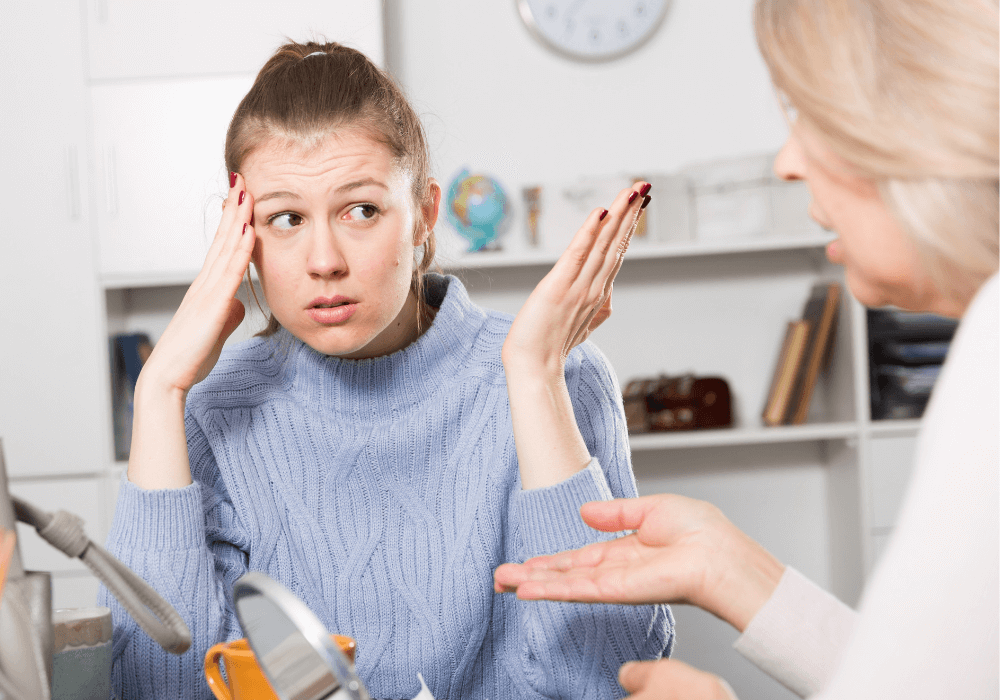 It’s the big question on your mind lately: “Why is my grown daughter so mean to me?”

You used to be a lot closer, but now, whenever you try talking to her, she’s closed off and responds with a hostile and resentful attitude.

It seems she’s holding a grudge against you.

But before you jump to thinking, “My grown daughter hates me,” let’s examine the most likely reasons for her disrespectful behavior.

Why Is My Grown Daughter So Mean to Me? 7 Probable Reasons

If daughters treat their mothers so badly, what’s the reason? Surely all this anger and disrespect didn’t come from nowhere.

The truth is there are many reasons your daughter may be lashing out. It could have to do with your behavior, or it could be entirely about her own life.

We’ve compiled a list of possible explanations for her hostile attitude towards you.

1. She Doesn’t Have Healthy Coping Mechanisms

If your daughter doesn’t have healthy coping mechanisms for dealing with strong emotions, she’s likely to lash out at others.

This means that whenever she’s going through something, she will effectively make life miserable for those around her.

The easiest outlet for her anger is someone she loves. She’ll lash out at you over the most minor things. She’s looking for someone to blame besides herself.

Anger is a secondary emotion, usually caused by hurt or sadness. The purpose of anger is to protect. By lashing out, she feels she is defending herself when she feels most fragile.

Maybe she feels you don’t see her as a grown woman. If you still treat her like a child and demand respect, ask yourself how you’d react if your roles were reversed.

If you’re trying to impose your idea of who she is, based on your “motherly intuition” and observations, she may be trying to show you who she is now — or who she wants to be — and is frustrated by your limited or skewed perception of her.

Her hostility now doesn’t mean she’ll never be open to repairing the relationship. But you don’t get to define her based on who she was (or seemed to be) when she was growing up. Give her the space to discover and define herself.

And focus more on showing respect than demanding it for yourself.

3. She Needs to Heal

If she’s dealing with repressed trauma, it might be hitting her pretty hard. None of the unpleasant emotions from her past will stay shoved down forever. When they come up, they may result in resentment towards you, whether or not you did anything wrong.

If she’s looking for someone to blame for past trauma, a parent will be a likely candidate — especially if she feels you could have protected her if you’d been paying closer attention.

You may be thinking, “I don’t like my grown daughter,” because she seemed so much happier as a kid. But if she’s struggling to deal with emotions she’s repressed, she needs you to care enough to consider outside help (i.e., a therapist).

4. You Pressured Her When She Was Young

Was she always the ‘good kid’? Maybe she got straight A’s, always listened to her teacher, and never asked for anything. Perhaps she was really helpful in taking care of her younger siblings, or maybe she did more household chores than anyone else.

Because of this, you thought she was a perfectly happy kid. She was so responsible — so ‘mature’ for her age. She would surely grow into a bright and successful adult.

Unfortunately, taking on so many responsibilities at such a young age kept her from fully experiencing and enjoying childhood. She was so concerned with meeting expectations and being low-maintenance, she never had a chance to be a kid.

It’s Not Selfish To Focus On Yourself: 13 Essential Ways You Should Put Yourself First

5. You Let Her Get Away With Too Much

Holding someone to incredibly high standards won’t improve their mental health. But letting your kids get away with too much won’t set them up to be successful in life, either.

If you always said ‘yes’ to her when she was young, she may now believe everything she wants will fall into her lap. And when it doesn’t, she’s likely to blame you.

The jarring reality of being an adult may be catching up to her, and if you didn’t teach her essential life skills, she might resent you now for her lack of preparation. Transitions aren’t easy, and she certainly wasn’t prepared for this one.

6. You Were Too Strict

Strict parents don’t raise well-behaved children — at least, not for long. By setting limits on what she could do, you forced her to be secretive. She didn’t trust you with anything. She hid her struggles for fear of angering you.

This fear made her an exceptional liar. You may think you knew her, but a large part of her personality was hidden from you. She found ways around your rules. She made excuses to cover things up.

As a child of strict parents, she never trusted adults to handle situations without getting angry and punishing her without even trying to understand. Maybe you never told her why she couldn’t do something, so she had to learn consequences the hard way.

Whether you contributed to this feeling or not, it’s there. She struggles with her confidence and self-image. This low self-esteem makes her prone to lashing out towards those she loves when she feels insecure.

This reaction, of course, isn’t an excuse for her behavior. But her feelings of worthlessness may have started a long time ago. If she was a low-maintenance kid, she might have grown to believe that she didn’t deserve certain things. So, she never asked you for anything.

Feelings of worthlessness commonly correlate with anxiety and depression. Both of these can make someone socially withdrawn or prone to bursts of anger.

What Do You Do When Your Daughter Turns Against You?

Most likely, her sudden disrespectful attitude towards you isn’t entirely your fault or hers. She’s responsible for her own behavior towards others, but you’re responsible for the way you treat her.

There are many things you can do to improve your bond with your daughter. Some of these methods may work better than others.

Now that you’ve read through this list of possible explanations for your daughter’s behavior, which of them stood out for you? And what will you do differently today?

1 thought on “Why Is My Grown Daughter So Mean To Me? 7 Highly Likely Reasons For Her Bad Behavior”