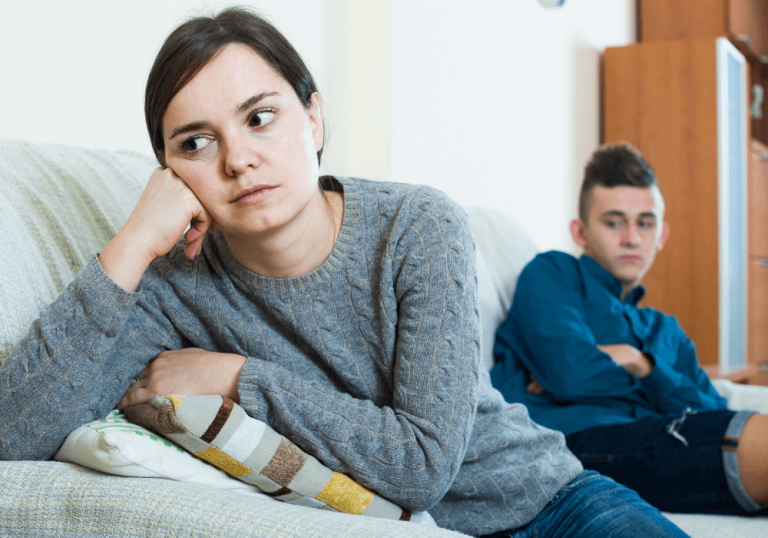 That’s it! You’ve had it with this kid.

And you know, until you talk to your son about his behavior and present his options, he’s likely just to keep on taking advantage of you.

Writing a letter to a disrespectful teenage son is a job in itself.

So, we’ve put together some ideas to help you get started.

How Do You Deal with a Disrespectful Grown Son?

Who is this scowling giant potato person, and what has he done to your sweet little angel-boy?

You can’t remember the last time he offered to help out with anything or thanked you for all you do for him.

In fact, he’s more likely to do one or more of the following:

You know you’re still his parent, and you still love the kid, but you’re finding it impossible to like him. And you’re not alone in that.

The thing is, he doesn’t want to listen to you when you start off with “We need to talk.” And his spidey senses tingle when you so much as think about staging an intervention.

So, why not write him a letter instead? I mean, you’ve tried everything else.

How to Write a Letter to My Disrespectful Son

Now that you’re at least partially sold on the idea of writing this letter, where do you begin?

We respectfully suggest not leading with “A letter to my disrespectful son.” You want him actually to read the thing and give it thoughtful consideration.

And he’s unlikely to do that if he feels attacked right from the beginning (even if he deserves it).

1. Outline the behaviors you need to address.

You don’t want him accusing you of writing him a “book” that he doesn’t have time or the patience to read. Think of how blog posts are formatted — with lots of short paragraphs. Then start by listing the behaviors you want to discuss with him.

List out the things that bother you the most and spend some time fleshing out your outline by articulating why those behaviors are so frustrating.

2. Think about how you want to support your son.

A letter to a grown son who is disrespectful will differ from a letter to a teenage son because you expect the latter to still depend on you for food, a roof over his head, etc.

A grown son should be able to provide those things for himself. If he still expects you to provide rent-free living space and all the food he can eat, he’s got some growing up to do. And clearly, the self-paced approach isn’t working for him.

3. Look at the situation from your son’s perspective.

You know plenty about his background and the challenges he’s faced so far. Try to empathize with him without letting him off the hook with his responsibilities.

If he shows no inclination as a teenager to take responsibility for his own words and actions, he’s not likely to magically shift into “responsible adult mode” the second he turns 21. Whatever’s keeping him in toddler mode is worth exploring.

And the sooner he gets his wake-up call, the better off he’ll be.

Address his disrespectful behavior clearly and without exaggeration or ranting. Don’t rhapsodize about the past when he was “such a good boy” or complain about every little thing he does or doesn’t do now. Focus on the most important things.

Spell out what goals you have for your relationship. Emphasize your desire for a good relationship with your son and your belief that things can get better between you.

Define your terms, so he knows what you mean when you use the word “disrespectful,” even if he defines that word differently—or thinks you’re the one being disrespectful toward him.

When you’re writing a letter (and then revising it), you can scrap anything that he’s likely to skim over with an eye roll. You can cut out anything that sounds overly emotional or insulting. And you’ll want to do that if you want your son to read the entire letter.

6. Keep your letter in the present.

Make your expectations clear, and don’t waste time trying to justify your actions to your son. He depends on you—not the other way around.

And you don’t owe him a struggle-free existence.

How To Write A Letter To A Disrespectful Grown Daughter

Do Your Siblings Treat You Like Crap? Learn How To Deal With Them

7. Decide how you’ll get this letter into your son’s hands.

Think about how best to get this letter to your son — and about what you’ll do after you know he’s read it. Make it clear you expect him to read it to the end and be prepared to discuss it with you (and, if possible, with your spouse).

You know better than we do what he’ll notice and what he’s likely to miss. Put the note where he can’t avoid seeing it. And it can’t hurt to ask him to sign and return it when he’s done reading.

Example Emotional Letter to Son from Mom After Disrespect

Now that you have some idea of how to proceed, the following example letter to a disrespectful son can help you put your thoughts into words.

What you said the other day stung. I’m aware of my mistakes as your mom; there have been many. But you and you alone are responsible for your own behavior.

You are responsible for how you treat people — from your parents and siblings to your partner, coworkers, and everyone you meet. If you truly know this and take it to heart, I don’t see how you can justify talking to anyone the way you talked to me.

I want you to be happy. And I want a good relationship with you. But if we’re going to have that, I expect you to read the following rules of this house and to sign your agreement.

Respect is about more than words. It’s love in action. We love you and want to see you make the most of your life because we know you can.

Please return this letter, signed and dated, as soon as possible. It’s due by the end of this week, along with your rent payment.

After reading the letter example and the steps described above, what points stood out for you?

What do you see in your son’s behavior that you’re most keen to discuss with him? And how soon will you get started on a letter of your own?