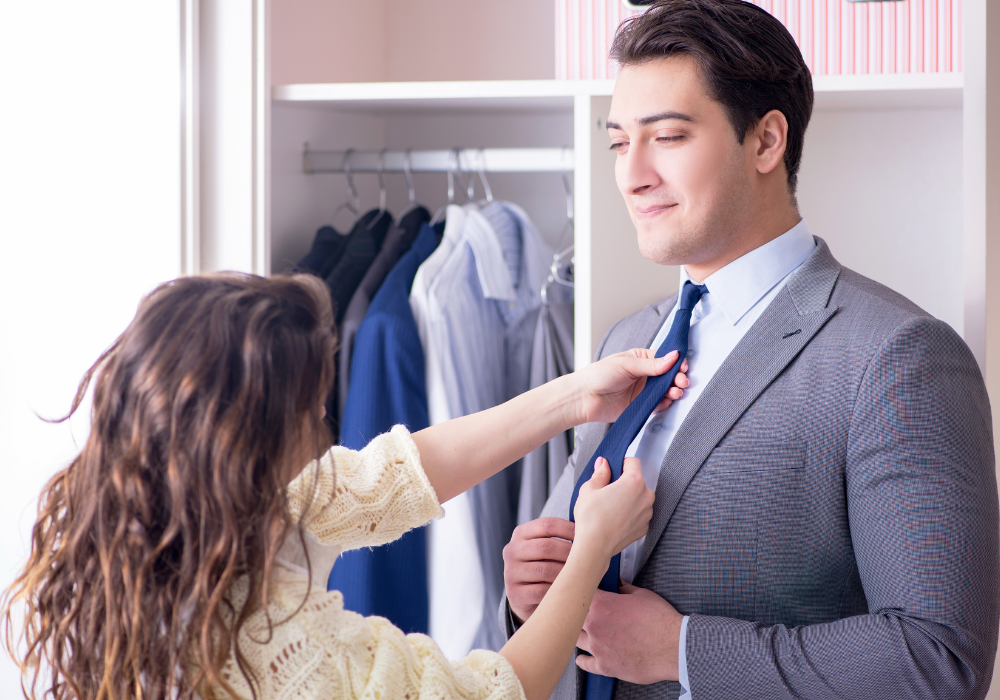 Should women be submissive?

It depends on who you ask.

Some people believe females are the so-called “second sex” and should demur to males.

Others find a woman being submissive as pleasant as a dirt pie.

Today, we’re breaking down the signs that a relationship is unbalanced and exploring whether women should be submissive.

So pull up a screen, grab your favorite drinks, and let’s do this together.

What Is a Submissive Woman and What Is An Example of Being Submissive?

Submissive is a loaded word. In some instances, it’s a positive; in others, not at all. So being called a submissive wife can be a compliment or dig, depending on who’s saying it and why.

Definitionally, “submissive” means “ready to conform to the authority or will of others; meekly obedient or passive.” Wives who welcome the label tend to share certain beliefs, including:

How do submissive women act? Again, every person and relationship is different. However, standard behaviors include:

Is Being a Submissive Wife or Partner Bad?

Whether or not being a submissive wife or partner is bad or good depends on your worldview and socio-cultural realities.

Sadly, many women still live in countries where they can legally be jailed, abused, and even murdered for not living their lives as second-class citizens.

But some women willingly adopt the lifestyle, or they’re raised in communities where they never learn there’s another option. So what are the pros and cons?

Pros of being a submissive wife include:

Cons of being a submissive wife include:

13 Signs You’re A Submissive Woman In Your Relationship

Notably, a lot of signs that you’re a submissive wife are similar to signs you’re in a toxic or mentally abusive relationship.

No, not all submissive wives are miserable and abused.

Some love it, and that’s wonderful for them. But if you’re on the fence and something doesn’t feel right, let’s review some signs you may be stuck in a submissive role.

Even though “traditional” or “biblical” families claim to be centered on child-rearing, many men in these relationships expect their wives to prioritize them over their kids. And, of course, his wishes always trump yours.

Females who believe that men are superior to women may be okay with this on the surface but, in practice, find it suffocating. The problem submissive wives face is that they have no outlet to express their frustration with the situation.

Not only do submissive wives need to put their partners above everyone else, but they also need to serve them unconditionally.

In most cases, women who agree to authoritarian relationships must put aside their needs and prioritize their husbands.

Some husbands are respectful and don’t take advantage of this expectation; others don’t.

3. You Cannot Say “No” To Intimacy

A partner who expects you to be sexually compliant at all times doesn’t understand the parameters of a healthy relationship. Everyone is the master of their own body — including you! If you want to be physical with your husband, godspeed. But it’s also fine if you don’t.

Moreover, please understand that marital rape is rape, and it’s illegal. You have a right to say, “No!” Abuse is never acceptable.

If you’re in a problematic relationship, consider contacting either the National Rape Hotline or National Domestic Violence Hotline.

Did he install a tracker on your phone? Does he question you when you go somewhere that wasn’t cleared beforehand? Do you feel trapped because of it?

You’re likely a submissive wife if you answered yes to any of those questions. If you answered in the affirmative to all three, you definitely are.

5. He Has Final Approval on Your Friends

Do you have agency in your relationships, or does your husband have the final say on who you can and cannot befriend?

It’s fine if your partner has opinions about your friends. That’s perfectly normal. But dictating who you can and cannot spend time with is a problem.

You’re an individual with agency, and the choice of companionship is your decision.

(Note: We’re not talking about cases in which your spouse is trying to help you overcome an addiction and wants to keep you away from your “vice friends.”)

6. He Strongly Influences Your Wardrobe

Is your wardrobe a reflection of his tastes and preferences or yours? If he controls what you wear, that’s not a super sign and signals that you may be a submissive wife.

That said, if you ask someone for their opinion, it’s unfair to get mad if you don’t like it.

7. He Cuts You Off From Friends and Family

Cult leaders are skilled at cutting people off from friends and family — and so are abusive husbands. Isolation makes people easier to manipulate and harm, and that’s precisely why they do it.

This behavior isn’t trivial. Instead, it’s a gigantic red flag that should be heeded.

8. He Doesn’t Support Your Goals Outside of Domestic Duties

Do you have dreams for your life apart from hearth and home? How does your husband feel about them? Does he know you harbor such aspirations?

And if so, does he encourage you to pursue them and support your efforts? If the answer is no, you’re probably a submissive wife.

Does Your Husband Yell At You? Here’s Why and 15 Actions You Can Take To Stop It

9. You Have Dreams You Don’t Foster

You enjoy many aspects of being a stay-at-home mother or adhering to a traditional relationship — but you also have dreams, interests, and passions outside that framework.

What do you do with those? Can you pursue them, or does your husband make it difficult? Is he happy about your wins or dismissive of your achievements?

If he isn’t excited about your projects, does his lack of investment upset you? If so, you’re likely playing a submissive role in the relationship.

Independence is a hallmark of healthy, consenting adult relationships. Women in consenting partnerships do not have to ask permission to go about their lives.

If you find yourself in a relationship where you’re constantly asking your husband if you can do this or that, it’s a fairly clear sign that you’re the submissive party.

Some men in dominant-submissive relationships see nothing wrong with belittling their partners — in public and private. He may be emotionally invalidating or toss around passive-aggressive quips at your expense.

People in healthy relationships usually don’t behave this way, so it may be a sign you’re in a skewed partnership.

12. He Makes All Decisions

One of the main features of a dominant-submissive pairing is that the “controlling” party gets to make all the decisions.

Where you eat, vacation, and live are all up to him. The same goes for what movies you see, what parties you attend, and how much money you can spend.

Some women prefer to relinquish their decision-making rights, but it’s a sign that you’re a submissive wife.

13. He Always Has the Last Word

Do the dynamics of your relationship require you to hold your tongue? Does your husband always get the proverbial conch last?

When your husband always gets the last word, your relationship dynamics likely give him more power in the partnership.

Personality traits aren’t immutable or definitive. Just because someone is traditional doesn’t necessarily mean they’re submissive, but nearly all submissive women are old-fashion.

But, of course, exceptions exist for every rule. With that caveat in place, let’s review seven personality traits many acquiescent women share.

Meek people are soft, quiet, gentle, and easily imposed upon. There’s nothing wrong with being this way. After all, we are who we are, and it is a common trait of submissive women.

Most women in traditional pairings are conservative — to an orthodox degree. Sometimes, they’re raised in highly religious communities and choose to continue living the lifestyle as adults.

Other people end up the submissive half of a coupling of their own volition.

If you were reared in a conservative community and now find yourself unhappy in a submissive marriage, consider re-evaluating your lifestyle and beliefs. Are they yours or a regurgitation of your parent’s views?

Naturally, submissive people are often service-oriented. They gain a sense of importance and satisfaction by helping and serving others.

If you fall into this category, don’t forget about yourself. Carve out at least 15 minutes a day to do something you genuinely enjoy that’s just for you.

Unfortunately, submissive women are also hyper-judgmental. They tend to look down on females who don’t have similar values. Sometimes, the criticism is genuine; other times, it’s born out of jealousy.

Whichever the case, being overly critical is terrible for your mental and physical health, and curbing that tendency is a goal worth pursuing.

Submissive women revere hierarchies and, as such, tend to be status-oriented. After all, “pecking orders” are the backbone of social dominance frameworks.

People who prefer to ride shotgun in their relationships are usually more compliant than those who are not. They need rules to structure their lives and can grow very uncomfortable when others break them.

Toxic positivity is the belief that people should maintain a positive outlook and outward appearance no matter how hurtful, dire, or challenging the situation.

Submissive women often feel the need to maintain a cheery facade, causing them to bury and ignore their emotions. Frequently, this can lead to intense mental health hurdles.

How to Stop Being a Submissive Female and Find Your Power

Are you a submissive female who doesn’t want to be? If so, how can you identify and reclaim your power?

Again, if you enjoy being a submissive wife, great. That’s your choice. As long as you’re not being abused, hurting others, or forcing your belief system onto others, you’re free to live your life as you see fit.

If, however, you’re in a relationship with skewed dynamics and don’t feel fulfilled, it may be time to reassess your relationship and make some changes.

You deserve happiness, and if being submissive doesn’t fill your satisfaction tank, make moves to regain your power.