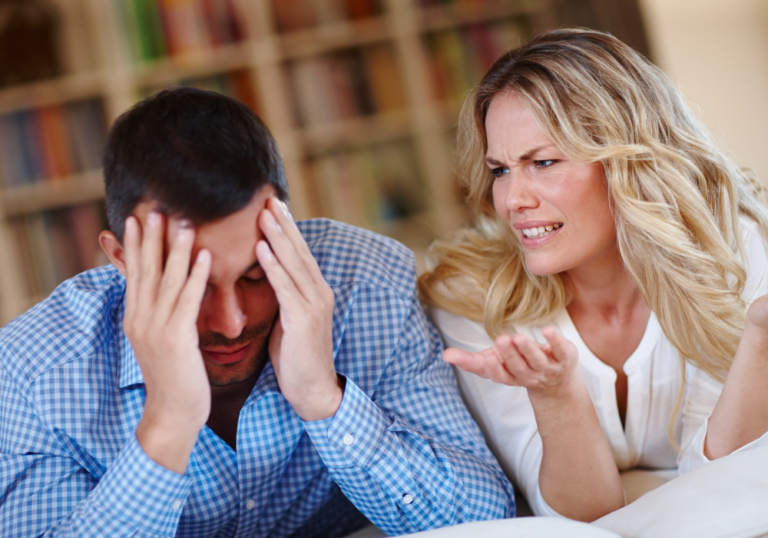 So, you think your man might be lying to you, or you’ve caught him in a whopper of a lie.

This is different than that “little white lie” you told last week.

He seems to have a track record of being less than truthful or downright deceitful.

It hurts, and you’re confused about how to handle it.

Why does he lie to you?

He’s got to know it’s tearing you apart.

Wondering why men lie so much got you here, and now it’s time to give those much-needed answers.

What Do Men Mostly Lie About?

Numerous research studies have shown over the years that women are likely to lie in an environmental, almost charitable, way.

Men are likelier to lie to “save face” or improve their self-image. That evidence rings true in the common lies men will tell women in their lives.

Why Do Men Lie? 11 Possible Reasons to Consider

Fair warning — this list will include reasons that will open your eyes and some that will make you mad.

It might even trigger some people while helping others discover a whole new world. Allow yourself some grace and an open mind to digest this.

1. He’s Trying to Impress You

Check your relationship from the beginning, starting with the first few dates. You liked all the same things and read all the same books.

It felt magical, even if you didn’t really like his football team and he didn’t like spending $7 on a cup of your favorite coffee.

He might be liberal with the truth and embellish when trying to win you over. Honestly? You might be too.

2. He Is Following Animal Instincts

Between the male ego and inferiority complexes, men will do anything during the hunt. Men are hunters, and women are gatherers.

It’s a tale as old as cavemen and women. Hunters don’t approach a deer and say, “Look, I’m going to kill you, skin you, and eat you, all to support my family.” They play the game.

In modern dating, facts about previous sexual partners and “are you seeing anyone else” can become slippery slopes that might chase you off instead of hunting you down.

It does not make lying acceptable, especially when the health and safety of sexual partners come into play. It is the ideal time to establish firm boundaries and build trust.

3. He Doesn’t Feel He Can Be Honest

The doe-eyed look of a woman softly saying, “You can tell me anything, and I won’t think differently,” can turn icy cold when a man is completely honest about something. He could also have a history of lying as a coping mechanism or a learned trait from dishonest parents or siblings.

There are entire social media threads about “Too Afraid To Ask” and even best-selling books on the topic. If you have a boundary of total honesty, be prepared for “I do think those pants make you look a little hefty.”

If being honest will hurt you, he will likely opt for a little white lie. Utilitarian ethics is a separate topic and field based on honesty while balancing the best and worst-case scenarios of the answer.

Going back to those boundaries, you and your partner must agree very early on what constitutes a lie. In science, there are various forms of lying – denial, omission, fabrication, exaggeration, and minimalization.

Is not telling you about a happy hour with a female co-worker a lie in your eyes? Is he a liar when he promises you a date night but then cancels due to a work obligation?

Men and women can have their own manipulated definition of a lie, and even within blurred gender lies, some people want “the truth, the whole truth, and nothing but the truth,” and others just want enough of the truth to feel secure.

5. He’s Lying to Himself

Self-awareness and self-love aren’t just female battles. Women just talk about it more. People who lie to themselves often suffer from being victims and claiming no responsibility for their actions.

The most challenging part for women facing men who lie for this reason is that we are wired to nurture and support people who are victims.

We don’t realize how enabling we have been to the lies people tell themselves until it’s too late, and it suddenly feels very personal.

When men feel the truth is going to charge a woman they care about emotionally, they will look for any escape hatch from the truth.

Women are pretty transparent with emotions, so men will see how you react when your bestie doesn’t text back or how you fly off the handle when a co-worker interrupts you at work.

They learn this behavior and its triggers. They want to avoid a tearful outburst or five days of radio silence. Even more, if the man is ready to end the relationship, he’s more concerned about avoiding drama than giving you “closure.”

He feels the decision to end the relationship was closure. Ghosting is selfish, but to a man, it’s self-preservation.

7. He Knows You Are a Super Sleuth

Lies of omission or manipulation will manifest when the man feels more like the latest true crime suspect you’re stalking instead of a trusted partner.

Your inner detective will timestamp and date his every move while he “lied” about being at happy hour for “an hour or two” when you knew, DARN WELL, it was 2.56 hours and “you had mozzarella sticks.”

If you need to track your partner like the BTK killer, you need to evaluate if the truth is even possible in this situation.

Besides, he doesn’t know about your latest Target run, does he? Is that a lie? Boundaries, my friend, boundaries need to be clear.

When we are filled with dopamine “love” chemicals, we just want the truth that suits our dream and fantasy of this perfect relationship we’ve always dreamed about since we first saw Cinderella slip on that shoe.

Women often justify a man’s empty promises because they WANT the lie(s) to be true.

If a man is habitually lying and sees that you are happy and still giving him everything he wants, why is he motivated to change? You’re happy, and he’s not getting four-page texts of raw emotions.

This builds up to the climax scene where you have a list of lies, and he’s going to tap dance around every last one of them.

Addiction is one of the most controlling factors of the mind. Brain chemicals are so messed up that even a lie normally accompanying guilt isn’t there.

Getting access to the addictive substance is the only truth the addict needs. In initial attempts to preserve his quality of life, he’ll lie about or hide his addiction to alcohol or pills.

He’ll gaslight you into believing he “only had two beers at the end of a long week” when you swear you counted nine beers and two shots.

For those who love an addict, the betrayal and loss of trust are two of the hardest parts beyond watching your partner free fall.

This is why you need to get professional support to establish boundaries without enabling the addiction.

Men are brilliant at compartmentalizing feelings, a feature that is lost to most female brains. Based on genetics, women feel everything at once, while men can put certain aspects of emotions aside.

It generally turns into him being “distant and indifferent” and explains how men can have a one-night stand while in a relationship then act like nothing is wrong. Their mind says it has nothing to do with you. It was a compartmentalized incident, and it’s locked away in the recesses of the brain.

Take all those hidden emotional compartments (including lies and betrayals) and then throw in some male competitive egos. Suddenly, it’s exciting that he’s lying to you and getting away with it.

He might take it to the next level of lying. Despite how much men avoid drama, they sure can create a heck of a lot of it.

There are several personality disorders that can make people more prone to lying, and the kingpin of those is narcissism. Narcissists have absolutely no emotional spectrum. They see people as objects and tools to forward their own motives.

As long as you are on board with their motives, you can hang around. As soon as you push back, you’re not only lied to, but you realize you’ve never actually been told a single truth.

You don’t know that person because the person didn’t exist. They create an ideal version of themselves for every person in their life to manipulate that person into furthering narcissistic self-absorption.

You can never call them out for their lies because they will gaslight, manipulate, victim blame, and eventually discard you – until they need you again. Then the cycle starts all over.

How to Handle It When Men Lie to You

“Why does he lie to me if he loves me?” you’re thinking right now. We can see it with that sad look on your face. While you cannot control the result of the lie, you can – and should – control the reaction.

Men who lie are no different than women who lie. For most people, it’s a social survival tactic. Being too honest has its drawbacks as well.

What we’re really worried about here isn’t “Is he lying to me?” The real question is, “Can I trust him?” Lies are just words, and one can easily manipulate words. It’s the actions you should look for that back up the words – for better or worse.