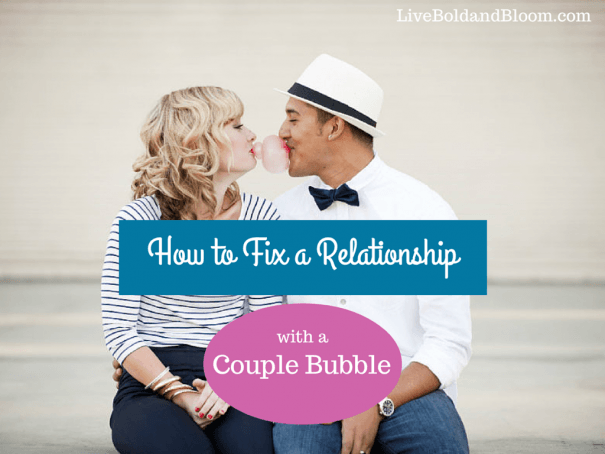 Have you ever considered going to a relationship therapist to help you and your partner fix your relationship or work through conflict?

Frustration, fighting, and detachment are common problems in marriage or any intimate relationship, but when you learn how to create a “couple bubble,” you have a powerful platform for quickly regaining trust and building intimacy and happiness in your love relationship.

Amy and John have been married three years, and are frequently at odds. Amy is often frustrated with her husband’s seemingly detached attitude towards their relationship. She feels as though she takes second place to his work and hobbies, and while she appreciates – even admires – his independence, she can’t help feeling neglected sometimes.

John can’t understand why his wife gets upset over seemingly trivial matters. He feels at times as though she is attacking him, and he instinctively withdraws. He loves her deeply, but wishes she weren’t so hungry for his attention.

The angrier she gets, the more distant he becomes. She feels he can be cold and uncaring. In fact, he is bewildered and hurt. He draws an invisible barrier about himself, and perfects the art of ignoring his wife whenever he senses antagonism in the air.

Ultimately, Amy decides that the best defense is to strive for indifference. “Stop being so needy”, she chides herself. After all, being autonomous is at the heart of a happy, healthy relationship. Right?

Here are some thoughts on how to fix a relationship to rebuild intimacy and connection:

After Me, You Come First!

Amy and John are following a path that so many couples pursue – that of seeing themselves as individuals first, and as a couple very much second. John is dimly aware that he spends much more time attending to his own interests than to his wife, but sees this is as necessary to his sense of self-worth.

Amy ends up feeling in equal parts resentful and ashamed for wanting more of his time. She sees it as a lack in herself. The wedge between them grows inexorably wider.

The fact is, both have different needs when it comes to their relationship, but they can’t – or won’t – admit this. Each is automatically prioritizing his or her own needs, and there is an inherent fear of dependency on both sides. To be dependent on another for any part of your happiness has come to be seen as a weakness.

But what if couples were able to willingly admit their needs and empathize with each other, thus fostering a type of “positive dependency” – a loving, safe environment in which each supports and nurtures the other?

This idea has been explored in depth by a number of couple therapists, such as Stan Tatkin, who has labeled it “the couple bubble”. Essentially, this means that the couple commit to placing their relationship first and foremost, creating a place of reassurance and protection.

Mutuality takes the place of autonomy. Encouragement and support take the place of threats and guilt. Unlike co-dependency, in which the relationship is driven by insecurity and fear, the couple bubble is driven by empathy, understanding and acceptance.

Within the couple bubble, dependency becomes a strength, rather than a weakness.

Two Against The World

However, we are conditioned to reject this way of thinking. As individuals, it is indeed important to be independent, to forge our own way in life. In relationships, however, we ultimately seek love, comfort and safety from another person.

A couple in a couple bubble will know that, come what may, they have each other’s backs. They feel the peace and contentment that comes from knowing that they are cherished and safe. They are two against the world, and as a team they are indestructible.

There are no secrets, no judgments and no insecurities within the couple bubble. It is as warm and as protective as your own home.

If Amy and John were to create their own couple bubble, Amy would need to understand and accept that while John loves her, he also needs regular time to himself, to focus on his work and hobbies. She needs to show that she respects him and has enough faith in him to know that he will not abandon her.

In return, John needs to understand that Amy needs greater emotional reassurance than himself, and that he needs to balance his “me time” with “Amy time”.

They both need to learn to think in terms of “we”, rather than “me”.

Of course, such an idyllic state of affairs wouldn’t happen overnight! It takes time and dedication to build a genuine couple bubble. Here is how you can go about making it happen.

Make A Pact With Each Other

In his book Wired for Love, Stan Tatkin has defined the couple bubble as being based on a series of agreements, such as:

“I will never leave you or frighten you.”

“I will relieve your distress, even when I’m the one causing it.”

“You will be the first to hear about anything.” *

These agreements are consciously held – like a pact. Above all, you are saying to each other: “We come first.”

Become An Expert On Each Other

Primarily, you need to become an expert on your partner. What makes your partner feel safe and secure, above all else? What will upset him/her? What will reassure that person?

Try thinking back to the last time you had some sort of conflict or upset. How did your partner react? What would have soothed him/her? A couple bubble can only exist between people who know each other really, really well. In time, each of you will come to know exactly how to comfort the other, in any kind of situation.

Of course, no one can expect to be the perfect partner at all times! There will be occasions when you do hurt your partner, even unintentionally. The key here is to make amends as quickly as possible.

Don’t let a situation fester – in this way it becomes lodged in the long-term memory, and may be very difficult to release. Address the rupture of your couple bubble immediately. Hold up your hands and apologize, talk about it and be sure there are no lasting hard feelings.

It helps to build up a repository of happy memories and experiences to counteract the effect of the odd blow. We tend to retain negative memories for longer and with more clarity than we do positive ones – so it makes sense to fill up on loving gestures whenever possible!

Learn what makes the other feel good, and act on it.  Hug your partner often, send affectionate messages, make breakfast in bed for long lazy mornings. It’s the little things that count!

Lean On Each Other

Let each other know that whatever happens, you’re there for each other. If your partner is distressed or needs help, you should be the first person to whom he or she turns. No issue is too weighty or trivial. Accept that within the couple bubble, you can be vulnerable – your partner is your rock!

So is there hope for Amy and John? Only if they both make the conscious decision that their relationship is worth it, and open up fully to each other. Building a couple bubble takes work, and is reliant on absolute transparency, trust and a deep-seated respect between partners. Amy and John have some way to go, but if they make that pact – and go all-in – then they have every hope.

Harriet Pappenheim, LCSW, BCD, is a relationship therapist with over 30 years’ experience in helping couples, families and individuals find personal fulfilment in their relationships. She is a founding therapist of Park Avenue Relationship Consultants (PARC), a group of expert clinicians based in New York City and specializing in couple therapy, marriage counseling and family therapy.

Do Amy and John’s issues sound familiar to you? Would you be willing to create a “couple bubble” in your relationship in order to protect it and make it stronger? Please share your thoughts in the comments below.