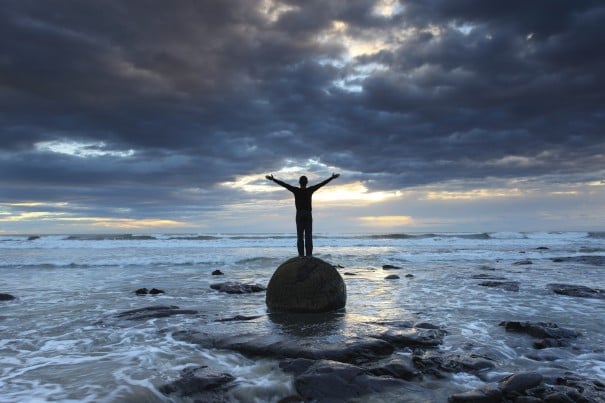 “A foolish consistency is the hobgoblin of little minds.”  ~Ralph Waldo Emerson

If you are reading my blog, you are likely interested in personal development and have read many books and blogs on various ways to feel better, get motivated,  be productive, overcome problems, and find your passion.

One topic that seems to have “attracted” a lot of attention is the law of attraction.

In short, the law of attraction suggests that like attracts like and that our thoughts control everything in our lives from our health to our finances.

If we send out the right thoughts to the universe, we will attract (manifest) all of the positive things to us we desire. And according to the law, negative events are the result of our negative or misguided thinking.

There are hundreds of books on the topic, and believe me, I’ve read many of them. Some of the most well-known and best-selling are The Secret

by Napolean Hill, You Can Heal Your Life by Louise Hay, and Ask and It Is Given by Jerry Hicks.

The basic premise of all of these books is the same: think about it, visualize it, affirm it, and see it manifested — and then it will manifest (meaning you will get it).

There are some important details you must learn about how to phrase your affirmations (in positive rather than negative language such as what you want rather than what you don’t want), and how to visualize things as already happening rather than occurring in the future.

The language of the law of attraction proponents is spiritual, magical, confident, and comforting. (Except for the part suggesting that anything bad happening to you is a result of your negative thinking which is pretty scary.) It promises if you can just tap in to the right frequency “out there” somewhere, you can have anything you want. With enough practice affirming and visualizing correctly, you will have the key to the abundance of the universe.

I spent a lot of time trying to attract things into my life and a lot of time in my head visualizing and affirming. Sometimes things worked out and sometimes they didn’t.

It was nice to think that I attracted the good things, but not so great to accept that my thinking caused the bad things.

How about you? Has the law of attraction consistently worked for you?

I’m not rejecting the power of positive thinking out of hand.

In fact, I know there is real science supporting the fact that repetitive thinking can rewire your brain and support the success of your actions. Read the book The Brain That Changes Itself: Stories of Personal Triumph from the Frontiers of Brain Science  to see what I mean.

But, I don’t think you can rely on repetitive thinking alone to “manifest” outcomes. A study mentioned in The Brain That Changes Itself revealed that a group of men practiced visualizing bicep curls for a period of time (without actually doing any exercises), and that their biceps did increase in size over that time. But the book goes on to say that repetitive action is what creates the most dramatic results in positive change. (That’s why athletic coaches use visualization to support actual practice.)

Positive thinking and visualization can get the ball rolling toward action and can reinforce action.

So maybe it should be called The Law of Getting the Ball Rolling rather than The Law of Attraction. And frankly, it doesn’t matter what you call it. What matters is that you DO something.

Yes, we can sit around and read books and visualize and chant and create dream boards. Those can be good and helpful things. But at some point, enough is enough. You need to pick up the pen, type the first word, make the first call, knock on the first door, put on your running shoes.

Whatever it is you want, you need to break out of the law of attraction and embrace the law of action.

One of my favorite writers is success coach Steve Chandler who knows a thing or two about making things happen. He wrote about this in a book he recently sent me called The Life Coaching Connection: How Coaching Changes Lives

in which he takes the law of action one step further:

What I recommend for people to do is make a difference. To actually make a difference all day, every day, by using creation. By substituting creation for where they once had attraction as their operating system. Rather than attracting a partner, I want to create a relationship. Now I can become active. I can join clubs; I join church groups and connect with civilization. (Chandler 44, 45)

Those are empowering ideas. That puts the control squarely in your corner.

Rather than waiting for the universe to manifest something for you, go out and create something — make a difference in the world. Maybe you aren’t manifesting a new Lamborghini or a better job down the road, but you are creating something positive in the here and now.

That’s enough for me.

In fact, that’s really all I want.

Visualizing and dreaming can be part of making a moment great. I think it should be at times. We need to step back from action on occasion to give room for creation. We need to sort out our ideas and clear our heads to determine what from the Pu-pu platter of life we want to do next and how we are going to do it. We need to use our thoughts to get the ball rolling.

But once the ball is rolling, don’t let it roll out into the universe and then wait for it to roll back to you, pulling your dream behind it. I’m sorry to say, but that just doesn’t happen. So get up off your chair and chase the ball. Run with it. Jump over it. Throw it in the air. Enjoy the chase even as you are running toward a destination.

You don’t need to wait for the law of attraction to kick in for good things to happen. Good things are with you right now. That’s the most magical reality in the universe — just look at all of the good things you have right now.

68 thoughts on “Why You Should Break the Law of Attraction”