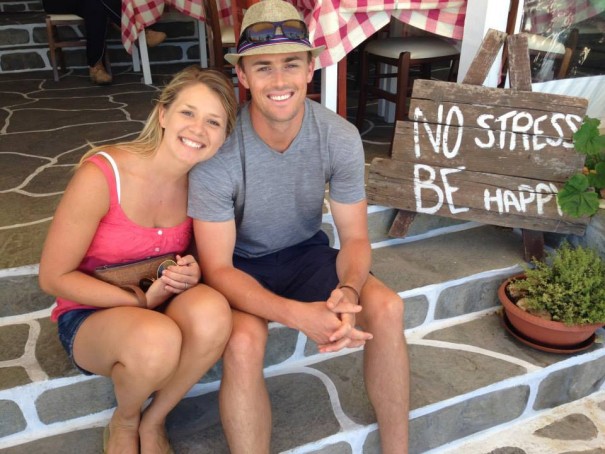 Shock And Awe: The Death Of Online Legend Scott Dinsmore

I lost a friend this weekend.

Scott Dinsmore was the creator of the blog Live Your Legend and had a worldwide presence with his LYL communities in cities across the globe.

Scott and his wife Chelsea have been on a spectacular around the world tour, posting their various adventures along the way on Facebook and on his blog. Along with thousands of others, I've been following his extraordinary adventures and experiences as they move from town to town and country to country.

Scott died this weekend in an accident while hiking Mount Kilimanjaro in Tanzania. He was 33-years-old. This was his last post on Facebook before going off the grid with Chelsea to begin the hike:

Leaving Cappadocia in absolute awe, and realizing I never lost my childhood wonder for balloons (and caves). Floating up and down in one of these babies for an hour allowed us to catch 4 sunrises in one morning! (And take a nap at 7am. Onward to Tanzania and then Off The Grid as we head up Mt. Kilimanjaro.

Scott didn't lose his childhood wonder, and his joie de vivre was infectious. You wanted to be part of Scott's world. And he wanted everyone in the world to live with the same kind of passion and joy that infused his entire being and the way he lived his life.

Scott and I shared a passion for helping people discover their life passions and find meaningful work. We met several years ago when both of us were brand new bloggers, having joined the same blogging club and course. It was run by Leo Babauta of Zen Habits (see Leo's beautiful tribute to Scott here). Leo and Scott both lived in San Fransisco and have become best friends over the last five years.

After “graduating” from Leo's course, Scott and I worked together on an online magazine that I edited called The Daily Brainstorm. At the time, he wasn't getting much traction with his first blog called Reading For Success, and I had gained just a modest amount of success with mine.

We talked regularly and would pick each other's brains on how to grow our blogs and businesses and how we could partner to share one another's products and courses. Eventually, though, Scott soared to a-list status when he created Live Your Legend. His desire to connect with anyone and everyone, to stand up on the TED stage and passionately talk about passion, and to actively support people around the world, made him a shining star and stand-out as an online presence.

The thing about Scott was he was just so damned nice. Here's this extremely handsome, successful, well-known online personality, and he was just a regular, “aw shucks” kinda guy. He was genuine and authentic. He wanted to make a difference in the world. He DID make a difference. He lived his legend.

I didn't know Chelsea, but I am heartbroken for her. They were clearly so deeply in love and enjoying such an amazing life together. They were in the prime of their lives, and this shouldn't have happened.

I didn't know Scott's parents, but it was clear from his Facebook posts that he loved them so much, and that they were a huge part of his life. I do know Leo, and many other of his good friends who worked closely with him online. I know they are suffering with shock and devastation right now, and I hope you'll join me in sending Scott's family and friends your healing thoughts and prayers.

Scott's key message on Live Your Legend highlighted the life-changing, world-altering power of people finding and living their life passions. Here's a quote from his site about it:

I BELIEVE THAT THE WORLD WOULD BE AN ALTOGETHER DIFFERENT PLACE IF WE ALL DID WORK THAT ACTUALLY MATTERED TO US. BECAUSE WHEN WE FOCUS OUR TIME AND TALENTS ON THE WORK THAT MEANS SOMETHING TO US, IT STARTS TO MATTER TO THOSE AROUND US AS WELL. THAT’S WHAT STARTS TO CHANGE THE WORLD.

There is no doubt Scott lived his passion. There's no doubt he inspired thousands of others to do the same. If Scott's life inspires you in any way, if his death perplexes and confounds you as it does me, I invite you to consider the brevity of life and allow the shock and awe of that cruel reality to awaken you to your life passion.

Go find your passion. Don't waste a single minute. Seize life by the horns as Scott did and live your own legend.

How to Change the World in 75 Simple Steps

What To Do When You Feel Lost In Life

I Don’t Know What To Do With My Life? 31 Of The Best Ways To Find Out

Totally agree. Scott truly lived his legend and I can’t believe he’s no longer with us but his impact and inspiration will always live on. I just wrote a tribute post to him too and I think yours is beautiful

I just found out and I’m in shock. I can’t believe it. How very very sad. Thank you for your beautiful tribute, Barrie.

Hi Farnoosh,
Isn’t it funny how we have this community of people we “know” from our online work and how they become part of the fabric of our daily lives. When something like this happens it thrusts our virtual realities into a brutal real life reality. We are mortal, and even the most talented, beautiful, and successful among us can be gone in an instant. It reminds us to appreciate everyone and every experience.

Hi Natalie,
I saw your tribute as well. Scott was an extraordinary person. He will be missed, but fortunately his great work will live on, not only on his blog, but also in the lives of all the people he inspired. It’s so great we have this huge online community of people to share our grief and offer support. This kind of tragedy is so shocking.

This is a beautiful tribute. And yes Scott’s legend will live on among many of us who were inspired and motivated by his work. I’m just a newbie at the ‘living my legend’ effort – hugely inspired a year or so ago by Scott’s Ted Talk and his ‘Live your Legend’ site. Soon after coming across it all I also launched my site Take time to BE YOU – also an effort to encourage people do more of what they love. And just like you’ve said Barrie, let’s all go and work hard at finding our passion, staying true to our dreams and values and let’s live our legend.

Hi Carolina,
I looked at your blog and it’s lovely. If Scott inspired you in any way, he has left a legacy through your work. It’s hard to believe he is gone. He was such a life force. I hope you will keep living your passion and spreading the word about the importance of living this moment to the fullest. We can all be emissaries of Scott’s important work.

I’m so heartbroken by the news. Scott was one of the people who inspired me on my freedom journey and I always had it at the back of my mind to attend one of his events eventually. I can’t believe I’m never going to meet him. My deepest condolences to his wife and his parents. I can’t even begin to imagine what this loss feels like. May he RIP.

Oh Anna, thank you for that lovely comment. I am sorry too that you didn’t get to meet him. With all of the outpouring of love and support from his friends and fans, something good must come from this horrible tragedy. I hope you will continue on your freedom journey and live your life to the fullest.

I’m very, very sorry about Scott’s passing, it’s unbelievable how a young person so enthusiast of life can suddenly die, where was God in this case?

Anyway, he will rest in peace because he has been a really good guy!!

Huge loss. Scott was a big inspiration and shared so much.
Will be missed greatly by many.

I didn’t know Scott but I wish I had. And Chelsea too because she has to be great for Scott to have fallen in love with her. My prayers go out to her and all their friends and to Scott’s parents also. So very young… so very kind… so very passionate about life.

What a beautiful tribute. I followed Scott’s blog and it’s clear that he had (and has and will continue to have) a massive impact on thousands of people’s lives. He seemed to truly live what he teached and enjoy life to its absolute fullest.

Another lovely tribute to Scott. He inspired so many of us. I never had the opportunity to meet him, although I always felt that I would eventually. He is a big part of the inspiration for starting my own blog, like you. I can’t believe he is gone.

Thanks for your beautiful words.

9 Signs Of A One-Sided Friendship
77 Questions To Ask Your Significant Other For A Closer Connection
How To Be A Nicer Person In 14 Steps
10 Clarifying Questions To Ask Your Unfaithful Spouse
How to Trust Someone Again When You’ve Been Hurt Or Betrayed
What Is Grit And How Do You Cultivate It?
9 Of The Best Neck Massagers [2020 Review]
47 Quotes On The Power Of Grit
8 Of The Best Natural Muscle Relaxers For Tension and Spasms