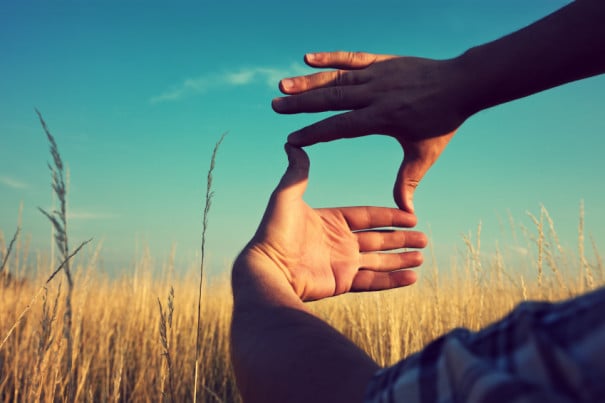 We often confuse perception with reality.

That is, we mistake how we understand things for the way that they really are.  Our thoughts and feelings seem real to us, so we conclude that they must be true.

But what if they weren’t – including even our most deeply held ideas and beliefs about ourselves, about others and the world?

Let me show you how to separate reality from perception so that you can see things as they really are.

Perception is the lens through which we view reality: ourselves, others and the world around us.  However, the lens often gets confused with what is being viewed through it.

To use a personal example of perception, on a flight back home from vacation in Alaska, the pilot announced that we were flying around a storm.

He asked that everyone remain in their seat as much as possible, as there was significant turbulence.

Neither meals nor drinks were served.

Even the flight attendants remained seated throughout most of the flight!

Personally, I didn’t know an airplane could move the way ours did.

I braced for the worst due to all the instability.  But, what clued me into the fact that my perceptions might not correspond to reality was a man sitting right behind me on the flight.  He was fuming that the crew was not serving food or drinks despite these minor bumps.

That eventually got me thinking.

It may come as a severe shock if you haven’t given much thought to this subject before, but our precious, cast-in-stone, objective beliefs are often totally in contrast to any reality. Or, more accurately, they are our perception of reality, rather than reality itself. ~Robert White

To him, the flight crew was overreacting.  I suspected he was a frequent flyer who had been on flights just as turbulent.

In the end, we were all hungry and thirsty but landed on time without incident.

The perception lens through which I viewed the seemingly extreme turbulence led me to believe we were in danger when we weren’t.

My distress on this flight wasn’t only useless, but it also instilled a fear of flying thereafter.

I became hypersensitive to any turbulence.

In thinking about your life, consider that the way you’re looking at a problem, challenge or issue might be part of the problem itself…

The meaning of reality is the true state of things.

In essence, it’s how things really are, whether we perceive them to be as such or not.

Things in themselves are inherently neutral.

It is we who supply the perceptions and build our beliefs with them.

Reality transcends both expectations and beliefs.

How our reality appears to us says a lot about our perceptions.

Unfortunately, the perception that my flight could easily go down suggested that something was seriously wrong.

All the jerking back and forth also produced a physiological reaction in my body that made me very uncomfortable.  Emotionally, I interpreted this feeling negatively and experienced much anxiety.

Thus, my thoughts easily fell in line with what I was experiencing, especially given the intensity of the constantly reinforcing stimuli.

A vicious cycle, if you will.

Are your problems, challenges or issues extremely difficult to overcome or seemingly insurmountable?

We often don’t realize how our perceptions cloud reality.  Perception and reality seem like one and the same.

In my case, what I was experiencing strongly suggested what was really happening.

This was particularly hard to discern given the feedback loop described above, in addition to my lack of understanding of airplanes and turbulence.

The pilot did occasionally check-in with us, always speaking calmly and never expressing any concerns.

However, my filter told me that he didn’t want to alarm anyone on board and admit he wasn’t fully in control of the aircraft.  I pictured him and everyone else in the cockpit sweating and in distress.

How To Discern Perception From Reality

Despite the big overlap between our perceptions and reality, there is indeed a gap between them.  We just have to look carefully to see it instead of jumping to conclusions based on some (but not all) available evidence.

So, how exactly do you untangle perception from reality?

Follow these six steps in separating reality from perception:

1. Think about an issue or problem you want to resolve.

Really get to the heart of what’s bothering you or what you’d like to shift or change.

2. Consider how you might be perpetuating the problem or issue.

Brainstorm as many of these types of contributing factors as you can, however unbelievable or extreme they might seem.

Pay particular attention to thoughts and feelings that might contribute.  Don’t worry if it feels like you’re overly blaming yourself.

3. Seek feedback from others.

When you have exhausted all of your ideas, ask a few others who know you well for their thoughts too.

Evaluate your responses and those from others. Underline any from other people that appear more than once. Then circle those that you also put down.

Assume that any of the reasons you discovered from self-evaluation and from others might be true, beginning with those you circled.

Find as many ways to support or justify these reasons as you can, even if they don’t initially seem true.

If none of the circled items seem to fit, then repeat this process with what you underlined or by repeating steps 1-5.

6. Redefine the problem and find solutions.

Once you feel like you’ve landed on what feels true to you, redefine the problem or issue and brainstorm solutions accordingly.

How well are you able to untangle perception from reality?

Given how subjective perception is, it’s no exaggeration to say that, in the moment, your perception is your reality.

Only when we take a step back to question our own perception do we enable ourselves to see beyond it.

The perception is reality philosophy takes for granted that an objective view of reality is an elusive ideal.

And since we tend to dwell on our perceptions and act on them, those same perceptions can influence reality — for us and for those connected to us.

Individual perception is selective. So, when we take the time to learn what other people see that we don’t (and vice-versa), we see more of what’s going on.

And we’re better able to influence reality in a constructive way.

May your influence on reality bless everyone affected by it (including yourself).

About the writer: Jack Grabon, LCSW, CPC practices spiritual therapy in NYC and holistic life coaching, helping those on a spiritual path to resolve issues and live happier, more meaningful lives.  He offers in-person sessions in New York City, as well as phone and Skype sessions.

18 thoughts on “6 Steps To Untangle Reality And Perception”