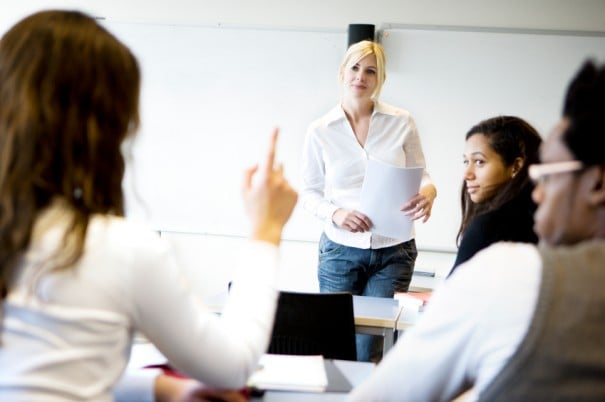 A guest post by Manal Ghosain of One With Now.

He who asks is a fool for five minutes, but he who does not ask remains a fool forever. ~ Chinese Proverb

Remember when you were a child and you wanted a toy or something? If you’re like me, chances are you turned into a nagging machine … asking, begging and pleading to the point where your parents gave up and you got what you asked for.

Kids are masters when it comes to asking for help or anything. Nothing seems to stop them. Fast forward to adulthood and where did this zeal for asking go?

Why do we build walls and become reluctant to ask of others?

Everything we do (or don’t do) is a result of embedded feelings and beliefs we accumulate over the years. The most common fears and limitations when it comes to asking are:

Fear of rejection. We take rejection as a measure of our worth. A simple no is a sign of rejecting us, and not what we asked for.

Fear of embarrassment. Who would want to look stupid by asking silly questions or wanting something ridiculous?

Social conditioning. Being independent is a prerequisite to growing up. A few reminders of this: Do it yourself … don’t ask for my help … when are you going to grow up and take care of yourself? Unfortunately, the lines get blurred and we take this as a sign to not ask for anything.

Ego. The ego doesn’t want you to appear weak and vulnerable. You should tough it out and do things yourself to look strong and independent.

All of the above create an aversion to asking. We’d rather spend hours spinning our wheels or coming up with excuses why we shouldn’t ask instead of just simply asking and moving on.

How can you move forward and overcome such limiting beliefs?

The best way to break the mold of social conditioning and self-imposed limitations is to question the validity of the limited beliefs behind them. Let’s try and find other meanings that can be as true or truer than our own assumptions about asking. The five examples below can be a good start.

If people say no, it means I’m not worthy.

We all have been rejected, but in all likelihood we've had more yes’s than no’s in our lives. Look for all the things and all the help you've gotten.  If no equates to a lack of worth, then yes must mean you’re worthy.

Think of all the successful people who faced countless rejections before they achieved their goals. Rejection didn’t negate their worth. They persevered and became successful.

The meaning you attached to the no is your own view and is one of many possibilities. Maybe the person you asked couldn’t help you, or they thought you could do it on your own, or they simply had other issues in their own lives.

Is it possible that when someone says no, it’s more about them than it is about you? Can a no be simply just that? It doesn’t take away from your value as a human being.

If I ask the wrong questions, I will look stupid.

What if you felt stupid for a moment or two? Is it the end of the world? We all feel awkward and not so smart sometimes.  So what?

What are the things that you think were wrong to ask for? Now list the things you asked for and received. How many of those were wrong? Are you confusing rejection with asking for the wrong thing?

Is it possible that when someone says no, it has more to do with them, and nothing to do with your request?

As far as I can tell success is—and only is—a collaborative effort.

Look at all the successful people you can think of (movie stars, authors, athletes). If they don’t have large masses supporting their work, they won’t be successful. End of story!

Most everything we achieve in life is with the help and support of others.

Doing things on your own is a better way to learn.

This is partially true. It goes without saying that you should do your part before asking of others.

You can’t ask someone to do your homework. But when you give it your best shot and you’re still stuck, what’s wrong with asking for help?

Asking others is selfish. It’s better to give than receive.

This flawed view permeates our society. We pity the ones who receive and take pride in our giving and generosity .

Here is the thing: in order for someone to give, someone has to be ready and willing to receive.

Receiving is as much of a generous act as giving. Someone grows and feels good when they help you. Wouldn’t it be selfish for you to deprive them of such joy by wanting to be always the giver but not a receiver?

Now that we've questioned some of the subconscious beliefs about asking, we can move forward and really start asking.

How to boldly ask for what you want.

Know what you want. The more specific your desire is, the easier it will be to communicate it to others. So be as clear as possible about what you want.

Why do you want it? If you have a good, authentic need or desire, you will be more motivated to ask for it. If you don’t know why you want something, then you won’t be as passionate in following through. Lack of passion will show through your actions and may not inspire others to help you.

Ask with confidence. Be calm and ask from a point of strength and gratitude. Don’t confuse confidence with being demanding.

Avoid emotional traps. Ask with integrity. Don’t try to manipulate a situation or guilt someone into giving you what you want. Cornering someone emotionally may work once, but no more.

Balance your expectations. Don’t be attached to the outcome. Think of the worst-case scenario (which would be a no). Do you have a plan B? Remember that you may not end up with what you asked for. Sometimes you get something better.

Allow for response. Give the other person enough time to process and think about your request. Communicate that clearly. It puts people at ease, and they don’t feel threatened by having to give you an answer on the spot.

Follow up. It’s possible that you won’t get a clear yes or no. In this case, don’t hesitate to follow up politely and confidently. You have nothing to lose and everything to gain. You get your answer.

Reflect and Learn. If you didn’t get what you want, it is okay. Take time to process any pain you feel. It is human to feel emotional after a rejection. Reflect on your experiences. What have you learned? What can you do differently?

If you got what you want, then you are set. Celebrate!

Asking is a skill that functions like a muscle. The more you exercise it, the leaner you get. And remember most human beings are kind and giving. We love to extend a helping hand. All you have to do is ask.

Manal writes about inner peace and living in harmony with the present moment at One With Now.

If you are interested in asking bold questions of yourself, download this free report called 30 Power Questions for Self Discovery.

18 thoughts on “How to Ask Boldly and Set Yourself Free”