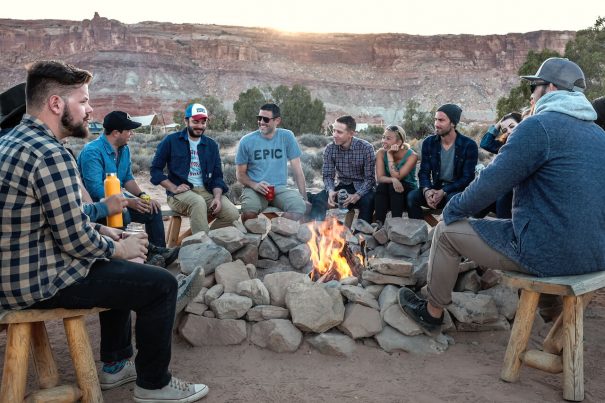 I’ve had a lot of titles in my life, ranging from personal trainer to corporate lawyer to author and coach, but the one that’s the most important is the oldest and least official: late bloomer.

Oh yeah, I was a major late bloomer, I had my first anything with the opposite sex at age 19, and have distinct memories of being terrified trying to order at a Taco Bell.

Raising my hand to volunteer in class? Not happening, even if my grade relied heavily upon participation.

People and social situations used to be paralyzing for me, as I would run through the gamut of assumptions people would make about me, from “He’s so weird,” to “Boy, he is saying stupid things. He is stupid.”

You don’t quite realize that you’re living a life defined by avoidance and fear until you’re deep in it. It came to a head for me on another Friday night at home alone during college.

I realized that it had been weeks since I had done anything social, and I could see the path my life was headed down if I didn’t make changes fast.

What happened over the next few months was an all-out assault on my comfort zone. I was supremely uncomfortable just about every day, but simply getting that practice was what allowed me to keep improving my social confidence and conversation skills.

I gained the first-hand experience to know that the worst-case scenarios floating around in my mind were never going to happen.

I’m relating my story to emphasize that conversation and social skills are teachable, and your social life is truly in your hands.

It won’t happen without some discomfort and challenge, but as they say, if it were that easy, everyone would be doing it!

Here are four conversation tips to help you never run out of things to say and become more likable:

This sounds a little counterintuitive but bear with me here.

When you encounter a co-worker on Monday morning and engage in a game of, “How was your weekend,” ask yourself — do you actually care about what they did over the weekend?

Maybe if it relates to you, but otherwise, not really.

It’s the same with other people. They, for the most part, couldn’t care less about what you did over the weekend.

Here’s a secret: people ask about you not to hear the answer to their question, but in the hopes that you have something interesting to say.

So you don’t need to answer the literal, direct question that is being asked. Re-direct it to something interesting or eventful.

You don’t have to abide by the linear, interview-y structure that many conversations are doomed to.

How was your weekend?

Literal answer: I watched the home and gardening channel for six hours and ate three bags of chips.

Interesting answer: Oh, I didn’t do much this weekend. But a couple of weekends ago I had a date with someone who turned out to be the lead performer in a Bavarian oompah band.  (Insert your own interesting or eventful topic.)

Which do you think people will receive better?

Pretend that instead of the literal question people are asking you, they are simply asking you to tell them something interesting about your life.

When we think about great conversationalists, we don’t often think about talk show hosts… but we should.

Their sole job is to keep a conversation going with a guest that may not inherently be very engaging or funny. Whatever the case, the talk show host keeps the show on track and entertaining.

They do this in two main ways.

First, they are amazing reactors.

This speaks to their ability to read people. When you can read and predict the emotion that someone is trying to convey and then display that emotion in a big way, you’ll encourage people to continue sharing.

You instantly make them feel like you understand them on a deeper level. It creates conversational flow.

Suppose that someone is telling you a story about how they were cut off in traffic and nearly had an accident.

What emotion is being conveyed here? Annoyance, anger, shock, and disgust. React in the way you think the other person wants, and react big.

Compare how someone might feel with a lukewarm reaction of, “That sounds dangerous,” versus an agitated “No way! That sounds terrible. I’d be sooo angry!”

Second, talk show hosts shine the spotlight on the other person.

They willingly resist the urge to share their own thoughts to allow the other person to talk more.

In a sense, they derail their own train of thought constantly and go where the other person wants to go.

It sounds obvious, but how often have you encountered someone who (1) talks over you, hoping you stop talking, (2) interrupts you, (3) doesn’t acknowledge what you say, or (4) is clearly waiting for their turn to speak and not listening to you?

These are ingrained habits that we do far more than we realize.

A quick way to start implementing this is to force yourself to ask four questions to the other person before sharing your own thought, experience, or opinion.

If this feels incredibly difficult or unnatural, you need to derail your train of thought far more. You just might be dominating your conversations and only waiting for your turn to speak.

Small talk can be terrible, there’s no denying it.

But I would argue that a large part is because we let it happen.

We expect the other person to say something revelatory we can dig into, or we hope there is a funny circumstance we can use to break the ice. In other words, we don’t tend to make the effort ourselves.

Knowing your stories stops that immediately.

What does that mean? Conversation follows certain patterns – you probably know the first five to ten questions you’ll be asked when you see someone, new or old.

So prepare mini stories (ten to fifteen seconds) to answer these questions beforehand.

Create semi-rehearsed answers to all of these questions that will only get better each time you see someone.

Knowing your stories ensures that your small talk can get beyond surface level and that you won’t run out of things to say.

And there are added bonuses.

It gives your conversation an interesting direction to follow right away.

For example, if you told a mini story about how you almost broke your leg skiing, the vast majority of people will start to ask you about that, and you get to skip other exploratory small talk questions.

Finally, by thinking about what you want to share and convey beforehand, you get to curate how you come off to others.

If you want to come off as adventurous, you better think about the adventurous parts of your life, and bring them into the conversation.

Knowing your stories works hand in hand with the first tip about not answering questions literally. Make it a goal to share an interesting story, not only a story that literally answers the question at hand.

This is the ultimate conversation tactic to help you never run out of things to say.

In fact, I say it’s like having cue cards during a conversation. You can literally plug your thoughts into this framework and produce insightful statements during conversation.

HPM stands for History, Philosophy, and Metaphor – these are significant because, well, for any given topic, everyone has these.

Whatever the topic at hand is, if your mind blanks, you can make an HPM statement. So for example, if the topic is puppies:

Philosophy: I love dogs! I grew up with two.

Metaphor: Puppies give me flashbacks of potty training my son.

Here are some key phrases for each to make it easier for you to simply plug in statements and play “mad libs” to make your conversations flow easily:

History: That reminds me of when… I remember when… The last time I…

Philosophy: My opinion on that is… I love/hate that because… Here’s what I think about that…

Metaphor: That makes me think of… Isn’t that similar to… That reminds me of…

With just a little bit of practice, you can use the HPM framework on any topic.

By applying just these four simple conversation tactics, you’ll find your self-confidence improves in social situations. You won’t feel so awkward and at a loss for words when you’re at a party or other social event.

Even if you feel insecure at first, try to “fake it ’til you make it,” Keep practicing until these skills become second nature. The positive response you get from those around you will prove that your efforts are paying off.

Check out his free worksheets and videos to help you with conversation tactics.