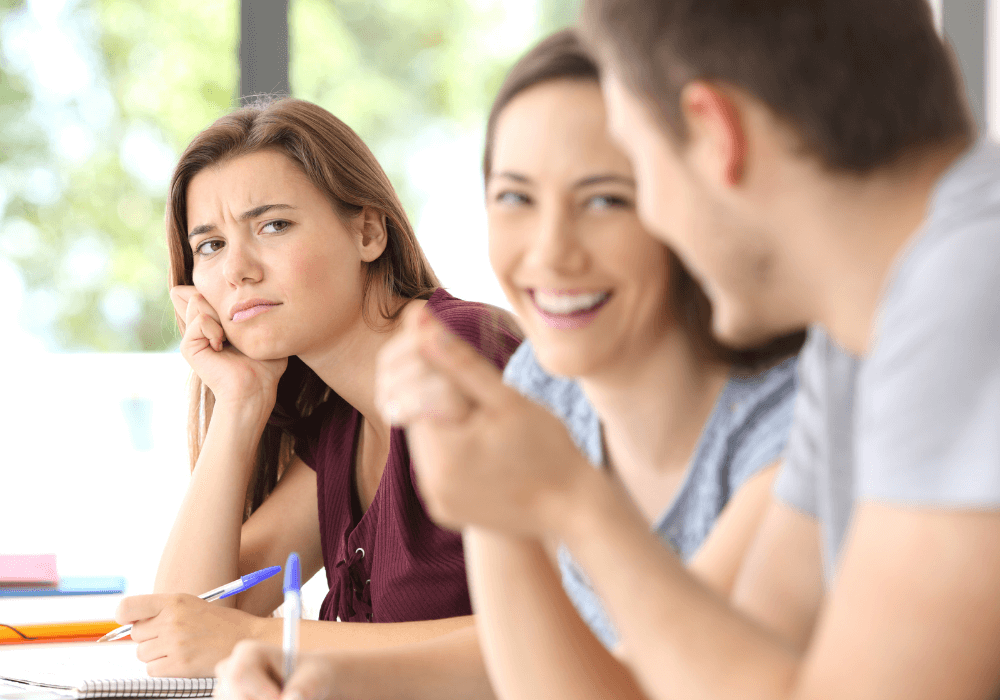 Do you know how to deal with jealousy?

You have a better idea of what’s going on in your own head than in someone else’s, so you’re more likely to excuse or even justify your own jealous feelings.

But how well do you really understand your own emotional reactions?

Read on to learn how to not be jealous anymore — or how not to react according to the false beliefs behind your habitual thought patterns.

Because in order to address jealousy in relationships, you need to know what you’re dealing with.

What is jealousy in a relationship?

Dealing with jealousy in a relationship is difficult when you don’t know exactly what jealousy is and how it manifests.

Jealousy is an emotional response to a misinterpretation of someone else’s words or actions.

According to Merriam-Webster, jealousy is often applied to “feelings of protectiveness regarding one’s own advantages or attachments.”

When someone acts out of jealousy in response to what they perceive as a threat to their relationship and to all the advantages that go with it, fear is usually at the root of it.

They’re afraid of losing what that relationship means to them.

What causes jealousy in a relationship?

Most incidents of jealousy can be traced back to a combination of two or more of the following:

Jealousy is a complex emotional reaction to your own habitual interpretation of someone else’s words or actions.

While objectively speaking, the words your significant other says to another person might be completely innocent, you hear those words through a filter that distorts them to fit a story of your own making.

That story usually comes from a false idea of your own self-worth, attractiveness, or lovability.

So, what can you do about it?

Once you’re caught up in the throes of jealousy, it’s incredibly difficult to steer the ship back to safe harbor. So, the best way to deal with jealousy is to address your triggers before they trigger you.

10 Ways to Deal with Jealousy in a Relationship

Overcoming jealousy begins with addressing your beliefs — about yourself, about how others see you, and about what you can and should expect from a love relationship.

1. Take responsibility for your own thoughts.

The first thing you need to do is to acknowledge that no one but you is responsible for the thoughts you choose to focus on.

Thoughts will come and go, but you’re the one who pays closer attention to some than to others.

It doesn’t help to shift the blame on others by saying things like, “Well, if you wouldn’t act so friendly toward that flirt, I wouldn’t have any reason to feel insecure,” or “If you didn’t dress like that, I wouldn’t have to feel on edge every time a guy walks up to say, ‘Hello.’”

You’re the one taking someone else’s words and actions and giving them a meaning that puts you in protection mode.

Even if you can point to past experiences that have made you feel jealous and insecure in your relationship, you don’t have to feel this way for the rest of your life.

2. Become aware of your self-talk.

Once you accept responsibility for your thoughts, it’s time to pay closer attention to them — specifically the self-talk that plays in your mind in response to your triggers.

For example, what goes through your mind when your significant other (SO) chats with others, particularly those you think your SO would find attractive?

Do you watch them like a hawk, seizing upon the slightest evidence that your SO finds the other person more interesting, more attractive, or more lovable than you?

Those thoughts don’t come from the interaction you’re witnessing; they come from your own beliefs about yourself.

Those beliefs are often formed and influenced by past experiences, but you’re not bound to them for life. And it’s not hard to change them.

Only when you recognize you’ve been telling yourself things that aren’t true can you then choose different beliefs that don’t provoke you into doing something to protect yourself and your own interests.

3. Identify the triggers that cause you to react with jealousy.

The biggest triggers for jealousy are the false beliefs you hold that cause you to feel insecure.

Here are a few examples:

The fear in these thoughts leads the thinker to suppose that their significant other is either a cheater or on the brink of cheating.

And this provokes a jealous response, because now the thinker feels neglected, second-best, or rejected.

Related: 11 Steps To Not Feeling Lonely In Your Marriage

The victim mentality implies judgment of the other person, even without evidence. And when the other’s innocence is proven, the accuser then feels guilty and condemns him- or herself.

Then comes the apology, followed by the promise of never being jealous again.

But with the next trigger, the cycle repeats.

4. Look at the situation from a different point of view.

Shift your perspective to step away from the false ideas you have about yourself.

How do you do this? For starters, don’t wait until something triggers you and then try to take the high road.

The time to address your trigger situations is when you’re not being triggered. That’s when you can take a calm look at your emotional reactions to past situations and to the beliefs behind them.

That’s when you can shift out of those archetypal character stories — including that of the Hero — and choose to witness the situation as an observer.

The hero wants to jump in and fix things, which implies a judgmental attitude. Step outside the adversarial archetypes, however, appropriate they might feel in the moment:

Choose the role of the compassionate observer — not judging, not jumping to conclusions, not jumping in to fix things. Just observe.

And when it comes to self-talk, stick with what you know to be true.

The correct response to your past mistakes isn’t to beat yourself up over them; it’s to accept that you reacted according to a false belief and to take the time to evaluate those beliefs and discard those that aren’t true.

When we mindfulness/what-is-mindfulness”>practice mindfulness, we observe our own emotions and accept them for what they are.

And the more we make time for this during our calmer moments, the better able we are to practice this when we’re tempted to judge a situation according to a false story or a false belief about ourselves.

When you’re observing a situation mindfully, you also observe the old scripts that come to mind and tell you how you should feel and react.

Instead of letting them rule you, though, just observe and accept them — knowing you’re human and still have much to learn.

You can also choose to focus on what you know to be true and choose a response or an action that better serves you and your significant other.

You can choose to trust him or her, knowing in your core that if the relationship ends, your ability to be happy won’t end with it.

Whatever happens, if you can be at peace, you lack nothing.

When you can step back and observe the situation, the self-talk, and the emotions as an observer, you’re in a much better position to change the story to reflect what is true or to give others the benefit of the doubt.

Once you can identify the false beliefs that cause you to feel jealousy, you can replace those beliefs with truer ones that don’t provoke a jealous response.

You can also choose a better story that builds on your strengths and the things you’ve accomplished that you’re proud of.

Tell yourself you chose this life to learn something critical to your soul’s growth.

Own your mistakes and learn what you can from them. The challenge you’re facing now is part of a much bigger picture.

And you’ll always be an irreplaceable part of it.

Stop with the self-judgment and condemnation. These should have no place in your perspective as a compassionate observer.

In choosing to take responsibility for your thoughts, you’re not judging those thoughts or yourself.

You’re observing and accepting them at face value, recognizing that your human mind doesn’t do everything all at once.

Related: How To Forgive Someone And Let Go Of Anger

You can acknowledge that your mind is given to making quick (if not entirely accurate) assessments of a situation and of your place in it.

You can know this without judging or condemning yourself for it.

8. Forgive those who have hurt you.

And if you can do this for yourself, you can do the same for others — observing them through the lens of compassion rather than seeing only your triggers and reacting to them as you have before.

Tell yourself that if you were in the other person’s shoes — having grown up as them and experienced all that they have — you might have done the same.

Because you don’t know what you would have done if your spirit had inhabited that particular body and brain and then experienced all that this person has experienced in his or her life.

You don’t know. So, don’t presume to think you would have done better.

Once you can acknowledge this and remind yourself that we, as conscious, living beings, are all connected to each other, you can at the very least express a sincere hope that this person will become all that he or she was created to be.

Do this not only to give the other person the gift of forgiveness but to reclaim your own personal freedom.

Because while you hold onto anger toward another person, you are not free to grow into the person you were created to be.

Once you’ve reclaimed your freedom through forgiveness, you can reclaim your personal power by being proactive rather than reactive.

You do this by anticipating those situations where, in the past, you’ve been susceptible to the influence of false beliefs and the emotions they evoke — and either avoiding them or creating a new response.

That new response could involve distracting yourself or reaching an agreement with your significant other regarding what you will do during those times when you might otherwise be tempted by old habits of thinking.

So, being proactive involves the following:

A final but important part of overcoming jealousy is building your own self-confidence. You can do this in the following ways:

The more confident you feel in yourself and your own abilities, the more you can build up the confidence of others who might otherwise fall into the same low-confidence traps.

And the more confident you feel, the less likely you are to feel threatened when your SO is being friendly toward someone who might love to take your place.

Do you need to deal with jealousy in your relationship?

Confidence and equanimity aren’t gifts anyone is born with, but both can be cultivated.

What we want for you is a life you love.

We want you to wake up every morning feeling grateful to be alive — feeling energized and ready to be your amazing self for as long as you can be.

And we want you to know what it means to be at peace, no matter what life throws at you.

It’s hard to live this life when you’re in survival mode.

And when you let emotions decide your actions for you — without ever looking behind them to learn why you feel that way — you’re stuck in an endless loop that stunts your growth and keeps you miserable.

You were not made to feel trapped by jealousy and anger. It’s no way to live. So, take your freedom and your power back, and start living in it.

And may your compassion and freedom influence everything you do today.