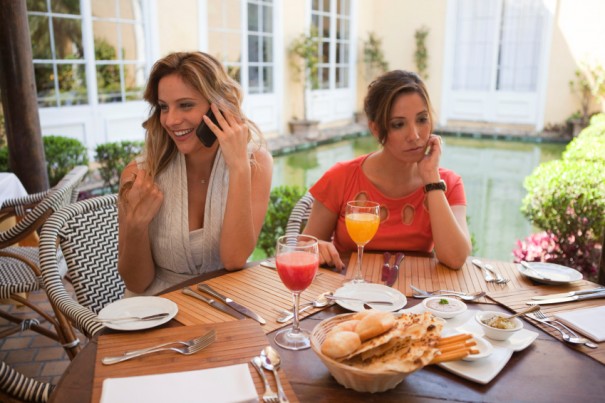 “Conversation should be pleasant without scurrility, witty without affectation, free without indecency, learned without conceitedness, novel without falsehood.” ~William Shakespeare

I sometimes wonder if conversation is a dying art.

It saddens me that people would rather converse by text or email rather than pick up the phone or talk in person.

Don’t get me wrong, I use text and email too. Plenty.

But real life, person-to-person conversation affords so many nuances, glimmers into someone’s heart and mind, as well as possibilities for deeper connection. It is an art form, in the same way letter writing is. It elevates and stretches us.

Conversation requires us to read signals, articulate, filter, and focus. It also compels us to share and find commonalities.Through conversation we gain self-confidence, learn to understand and feel understood, and experience the joy of simple human connection.

Email and texts are one dimensional, leaving lots of room for misinterpretation and little room for deeper engagement. Texting and email have their place for sure. They are serviceable and often necessary, but they are no substitute for the real thing.

Yes conversation takes more time. It isn’t efficient. It involves coming out from behind your phone or computer and revealing more of yourself. I think this is part of the lure of cyber-communication — we don’t have to extend ourselves. But oddly we feel free to say things we wouldn’t or shouldn’t say face-to-face.

One of the unfortunate consequences of relying on cyber-communication is that we’ve lost touch with the joys of person-to-person communication. And we’ve forgotten how to converse in ways that draw others toward us rather than pushing them away.

The influence of television and movies also have watered-down and uglied up our conversation style. Reality programs make the art of conversation look like mud wrestling. We’ve forgotten the power the spoken word has both for good and ill. And we’ve been duped into believing it doesn’t matter that much.

But it does matter. It matters because in spite of the accessibility of cyber-communication and our reliance upon it, we still need real interaction. We crave it — it’s genetically coded in our DNA. Humans are social beings who want to connect and engage with others.

We need to engage in ways that foster healthy and fulfilling relationships. We can do that through conversation if we know how to converse properly.

If  conversation has devolved in your life, or you’ve lost touch with the art of conversation, you might be conversing in ways that push people away rather than draw them toward you.

Here are ten conversation-killers you want to avoid . . .

If your conversation is filled with negativity, complaints, mean gossip, or pessimism, you won’t be very enjoyable to be around. It’s energy-draining for the listener. Of course in close relationships, we need to share our difficulties, but these shouldn’t dominate a conversation — especially with casual acquaintances or people you don’t know well.

2. You use too much sarcasm

A touch of sarcasm here and there can be witty. But if it’s constant, it is off-putting and hurtful. Many people don’t find sarcasm funny at all, or they simply don’t understand you are being sarcastic. If you tend toward a sarcastic sense of humor, temper it until you know whether or not the listener appreciates it.

Related: How To Start a Conversation When You First Meet Someone

If you don’t have much to contribute to a conversation, then it isn’t really a conversation. Conversation involves sharing ideas, feelings, experiences, and knowledge. Mentally prepare yourself before a conversation with topics for discussion or interesting things you’ve done or read. (But try to avoid topics that are controversial or potentially offensive unless you know you the other person or people well and know they enjoy these topics.)

4. You over-share or talk about yourself too much

Great conversation actually involves more listening than talking. You listen to acknowledge and engage with the other person. If you talk too much about yourself, the other person feels like merely an audience for your one-man show. And if you share too many personal details about yourself with people you don’t know well, it feels awkward and icky.

5. You give unsolicited advice

Not many people want advice unless they ask for it. If you tend to want to tell people the best way to do something or share your expertise, make sure you ask them first if they want your thoughts. Or say nothing until asked. (Yes, I get the irony that I’m sharing advice here, but hey, this is a personal development site!)

6. You have no filter between brain and mouth

If you tend to blurt things out before thinking, stop. This can kill a conversation dead in it’s tracks. Sometimes people do this under the pretense of being “real and honest.” But telling it like it is doesn’t foster connection. It just make you appear harsh or judgmental. Of course, alcohol can loosen the filter between brain and mouth.

Related: How to End a Conversation (Without Being Rude Or Awkward)

7. You dominate the conversation or interrupt

A conversation involves two people. You must listen as much or more than you talk. And when someone else is talking, let them finish and respond to what they have said before presenting your thought or story. If you’ve ever been around someone who “pontificates” during a conversation, you know how unattractive that can be.

A real conversation involves looking the other person in the eye, acknowledging them verbally and through facial expression, and being engaged in what they are saying. If you are looking around, checking your texts, answering phone calls, or acting otherwise distracted, you’re sending a message that you aren’t really in the conversation.

Did you know that smiling is evolutionarily contagious? We have a subconscious innate drive to smile when we see someone smiling. Our brain’s circuitry of emotion and happiness is activated when we smile, so when we smile, we’re activating that in others. A Penn State University study confirmed that when we smile we appear more likable and courteous, and we’re perceived to be more competent. So smile during conversations!

Would you like to join this conversation? Please share your thoughts or experiences around good and bad conversations you’ve had. And share the conversation with others by clicking the social media buttons below.