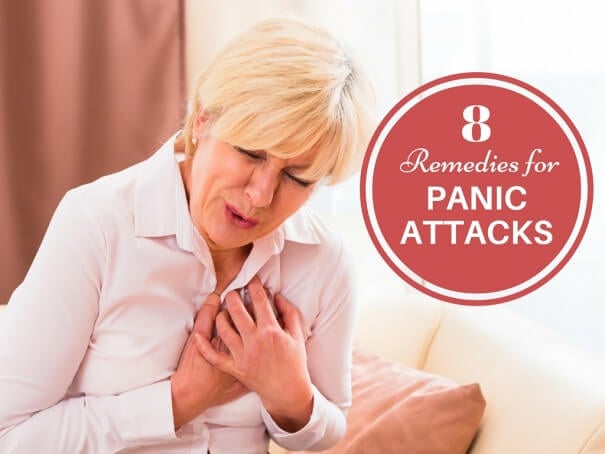 My friend Susan was driving on a busy Atlanta highway when she was struck by what she was certain was a heart attack.

Her heart started pounding out of her chest, her breathing was so constricted she was gasping for air, and she was pouring sweat.

She managed to pull off the highway and call her husband, tearfully explaining what happened and that she needed to get to a hospital. He picked her up and headed straight to the emergency room.

After a battery of tests and hours at the hospital, the doctors told my friend her heart was perfectly normal. She hadn't had a heart attack. She'd had a panic attack.

Of course she was relieved she wasn't dying or didn't need surgery. But she was also embarrassed and confused. How could she be driving along the highway minding her own business and suddenly be blind-sighted by sheer terror and a host of symptoms that are classic heart attack warning signs?

Every time she got back in the car, especially if she had to drive on the highway, my friend felt extremely anxious and on edge, fearing another attack might happen. Over time, she stopped going out as much and would go to extremes to avoid the highway.

If this story sounds familiar to you, you're definitely not alone. According to the Anxiety and Depression Association of American, over 6 million people in the U.S. suffer with panic disorder.Women are twice as likely to be affected as men.

According to the Association, “Panic disorder is diagnosed in people who experience spontaneous seemingly out-of-the-blue panic attacks and are preoccupied with the fear of a recurring attack. Panic attacks occur unexpectedly, sometimes even during sleep.”

For many people, like my friend, the most difficult part of having panic disorder is the ongoing fear of having another attack — as well as the embarrassment they feel about having them.

The fear compromises your life, making you avoid situations that you once enjoyed or felt perfectly comfortable with because you're so terrified of losing control. The embarrassment can make you suffer in silence without seeking support or treatment.

The symptoms of a panic attack do sound like textbook heart attack symptoms. They include:

If you suffer with panic attacks, you may wonder why it happens to you. What causes panic disorder and how did you become the lucky recipient of this terrifying mental health challenge. There are a variety of possible reasons from . . .

Panic disorder often occurs with other mental health issues like a major depression or other anxiety disorder. Fortunately, panic disorder, even if it is accompanied by depression and generalized anxiety, can be treated successfully.

Doctors frequently prescribe anti-anxiety and antidepressant medications for panic disorder, and they can help many people with the symptoms of panic disorder and any accompanying depression or anxiety. However, these medications do have side effects, and can be risky for teens and young adults.

There are some alternatives to medication that have proven highly effective in treating panic disorder.

Here are 8 natural remedies for panic attacks to reduce the symptoms and anxiety about having another attack:

CBT is a well-established, highly effective, and lasting treatment that focuses on identifying, understanding, and changing your thinking and behavior patterns. These are the patterns that contribute to your feelings of panic and anxiety about having another panic attack.

With CBT, the therapist encourages the patient to be actively involved in his or her own recovery by teaching them useful skills and new mindsets that give the patient a sense of control and self-awareness.

These skills might include learning more about panic disorder, tracking symptoms and triggers between appointments, and completing homework assignments related to the new skills they learn.

In order to improve, the patient must practice the skills, follow through on homework, and stay committed to the therapy sessions. If the patient follows these steps, they can see benefits in 12 to 16 weeks, depending on the individual and any accompanying mental health issues.

Mindfulness practice and calming skills have proven successful in reducing the anxiety related to panic disorder, as well as coping with panic attacks when they occur.

During a panic attack, especially once you can recognize once coming on, you can remind yourself that they attack won't kill you and should pass within 10 minutes or so.

Practice anchoring your mind to your breathing by focusing on each breath. Count to 4 on each inhalation and count to 4 again on the exhalation. Continue to focus on your breathing until the symptoms abate and pass.

If the panic attack is so strong that you can't focus on breathing, simply name the symptoms you're having as you feel them. For example, say to yourself or out loud, “My heart is beating really fact. I feel like I'm going to throw up. I am really sweating.” As you name your symptoms, you are disassociating from them. They are symptoms, but they are not you.

During times when you aren't having an attack, you can practice other mindfulness techniques that calm the “fight or flight” center in your brain and strengthen your ability to calm yourself during an attack.

One of the best practices is meditation. Meditation has been proven to stimulate your parasympathetic nervous system, the part of the nervous system that helps your body return to a calm, relaxed state after the threat of danger has passed.

Meditation also reduces anxiety and depression by enabling your body to balance its own neurochemical system. It also helps you stay in the present moment so your mind free of the worry that can trigger panic attacks. These positive effects last even after your mediation session.

When used for panic disorder, exposure therapy helps you learn to cope with panic attacks by exposing you to the physical sensations of panic in a controlled environment with your therapist.

You may be asked to hyperventilate, shake your limbs, or hold your breath to cause sensations similar to the symptoms of panic. With each exposure, you become less fearful of these physical sensations and feel more control over your panic.

If you have agoraphobia (fear and avoidance of places or situations that cause you to panic), then part of your treatment might be exposure to these situations. You face the feared situation until the panic begins to go away, and you learn that the situation isn't as scary as you perceived it to be.

4. Work with an EMDR therapist.

When you have a panic disorder, you may have a backload of negative or frightening experiences for which you didn't get the support and help you needed to resolve them.

These could be traumatic experiences in your childhood or adult life that might even cause post traumatic stress disorder (PTSD) which is often accompanied by panic attacks.

EMDR (Eye Movement Desensitization and Reprocessing) is a breakthrough therapy that can help you overcome the devastating effects of psychological trauma. It has been extensively researched and proven effective for the treatment of trauma.

The EMDR therapist leads a patient in a series of lateral eye movements while the patient focuses on various aspects of a disturbing memory.  The eye movements in EMDR therapy are a form of “bilateral stimulation.”

Bilateral stimulation is stimuli (visual, auditory or tactile) which occur in a rhythmic left-right pattern. It provides a relaxation effect, decreased worry, and less attachment to negative thoughts.

During the EMDR procedure, patients follow the movements of the therapist's hand from left to right or a watch a series of lights moving from left to right.  This bilateral stimulation helps the patient “process” the memory in a way that leads to a peaceful resolution.

EMDR has been extensively studied, and the results show it has an 80-90% success rate for single-event traumas in 1-3 ninety minute sessions. For those who have experienced more trauma, abuse or neglect earlier in life, it takes longer than 1 to 3 sessions.

Some limited studies of EMDR specifically for panic disorder have shown promise; however participants suffering from panic disorder with agoraphobia did not respond as well to EMDR.

Sometimes the simplest changes can have a profound impact on how you feel.

Research has shown that tryptophan can have a positive effect on stress because this amino acid helps your brain produce feel-good chemicals. You will find tryptophan in a variety of foods: turkey, chicken, bananas, milk, oats, cheese, soy, nuts, peanut butter, and sesame seeds.

Studies have also shown a relationship between the B vitamins and mood. A deficiency in B vitamins such as folic acid and B12 can trigger depression in some people. You can take a vitamin B supplement or eat foods rich in B vitamins such as beef, pork, chicken, leafy greens, legumes, oranges and other citrus fruits, rice, nuts, and eggs.

Complex carbohydrates can increase production of serotonin (a chemical related to well-being and happiness) in the brain. Try to choose healthy carbs like whole wheat and other whole grains. beans, and brown rice.

If you are prone to panic, anxiety, and depression, you should avoid caffeine. It has been shown to inhibit levels of serotonin in the brain which can cause you to become depressed and feel irritable. Caffeine is also a diuretic, making you go to the bathroom more often, and leading to dehydration. Even mild dehydration can cause depression. Caffeine also can keep you awake, leading to stress and anxiety.

According to a recent study in Norway, three exercise workouts a week can reduce the symptoms of panic disorder, with effects lasting over a year. Exercise can reduce anxiety and panic attacks in a variety of ways:

Exercise creates physical reactions similar to what happens with a panic attack. As with cognitive behavioral therapy, exercise forces you to confront these feelings in a safe way. This awareness rewires your brain and showing you that you don't need a dramatic physiological response every time you're stressed.

There's no question that recreational drugs and alcohol can make any mental condition worse, and if you have a panic disorder, you should avoid them altogether.

Alcohol or drugs may temporarily relieve the distress of a panic disorder, but ultimately they only intensify the symptoms of anxiety.

Drinking or taking drugs can be an escape from the discomfort, but it's far too easy develop an addiction. Because alcohol and drugs can trigger panic attacks, self-medicating with these substances makes the disorder worse.

A study published in Behaviour Research and Therapy reveals that alcoholism occurs in 10 to 40 percent of people who have panic disorder, and that 10 to 20 percent of individuals with panic disorder struggle with substance abuse.

If you are suffering with panic attacks and any other mental issues related to your panic disorder, try to simplify your life and obligations.

Let go of obligations and tasks that aren't absolutely necessary until you feel more in control. Try to stay away from people who upset you or cause you stress.

If your work is causing you excessive stress, try to address the issue and deal with it rather than allowing it to fester.

The calmer your life is, the easier it will be to recover from your panic disorder and get the support you need.

Panic attacks and panic disorder are very common mental health problems and nothing you should feel embarrassed about. You don't have to live in constant fear of having an attack or attempt to define your life around a possible attack.

Do some additional research on these various treatment options I've outlined, and find a licensed psychotherapist who can support you as you treat your symptoms and regain control over your life.

Don't accept panic attacks as something you have to put up with. Take action today so you can regain your peace of mind and joy in life.