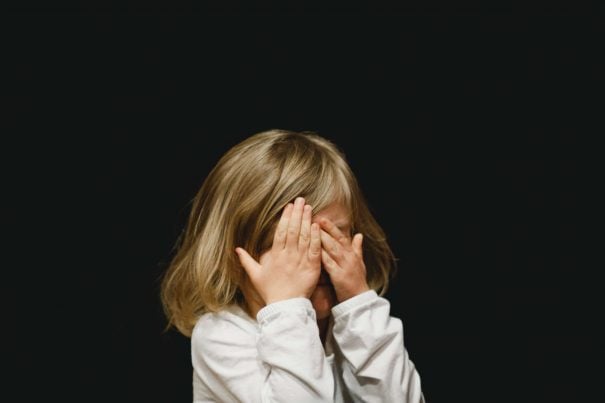 I remember him, that little boy with curly hair. He’d sit quietly in class, fiddling with his fingers all the time.

One day, it happened. It started as a small argument between him and the girl sitting next to him over an eraser, and before we knew it, it escalated quickly.

The boy punched the girl repeatedly until her nose started bleeding. He said, “Boys can hit girls.” After that day, I never saw him again.

Back home, I could hear our moms talking about how the poor kid was from a broken family, and how he had probably picked that notion from his father who would beat up his mother regularly.

I didn’t understand what that meant then, but now I do.

Being in an abusive relationship is scary.

The person who is supposed to love you the most, protect you from the world, and shower you with attention and kindness is the person who is now hurting you physically and emotionally.

It’s frightening, hurtful, and confusing all at the same time. But then, you put up with it because you keep hoping it will change.

But the dynamics change when there are children in the picture.

For someone in an abusive relationship, calling it quits and parting ways becomes a different ball game because of fear about the impact it would have on their children.

It’s true that kids from broken families suffer some pain and difficulty dealing with the end of their parent’s relationship. This is especially true if the divorce or break-up is acrimonious.

However, growing up with parents who have abusive relationships isn’t going to do them a world of good either. In fact, it does much worse.

So, here’s the thing.

Children are better off with separated parents than being raised in an abusive environment. The impact this kind of an atmosphere has on the minds of children is extreme.

So, if you have children, and you live in an abusive relationship, for heaven’s sake, do yourself and your children a favor. Get out of it!

If you’re staying with your partner for the sake of your children, you need to be aware of how it’s impacting them.

First of all, it’s important to identify whether you are in an abusive relationship.

There are many people who assume that abuse pertains only to physical violence. That’s not true.

Verbal and emotional abuse are as abusive as being physically violent. If your partner swears at you or raises his voice and talks to you in a derogatory manner, that’s abuse too. If he controls, manipulates, and plays mind games with you, that is also abuse.

When your children see your partner engaging in any form of abusive behavior, they may assume that it’s a “normal” way to interact in a marriage or love relationship. They may confuse love with pain, violence, criticism, and control.

They may feel frightened and confused, but as long as you as the adult accept the abuse, your child assumes it must be acceptable.

These conflicting feelings cause them a great deal of inner turmoil they don’t have the skills or judgment to handle. When a parent is violent or emotionally aggressive, a child becomes distrustful and can have difficulty bonding, which can play out in peer and romantic relationships when they become adults.

If you can’t understand why your abusive partner behaves the way he or she does, and it causes you grief, confusion, and pain, imagine how it must impact your child’s perceptions of a loving, safe home environment.

Children learn by observing. Like the little boy I mentioned earlier, children imitate their parents.

If they grow up in an abusive household, they might believe that abuse isn’t wrong — or at least that it is an option when things don’t go your way.

The boy who said, “Boys can hit girls,” was imitating what he had seen at home. Imagine if the child grows up with the same mindset and gets into a relationship with a girl. The cycle of abuse would never end.

If the child sees her mother manipulating her father in order to get something, the child views manipulation as an acceptable way to get your needs met.

Children have a natural propensity to identify with strength, so it’s not uncommon for a child to ally themselves with the abuser and lose respect for the victim/parent.

Even if you children don’t witness abuse directly, the tension and discomfort created by the dynamic will infect your kids. They will feel insecure and hyper-vigilant, always wondering why things feel so unhappy and strange at home.

3. They self-protect with extremes.

Children pick up many of their characteristics from their parents.

I’ve never seen my own father raise his voice, so when I hear someone yell, I get very scared. For me, even an argument must be conducted in a quiet voice. Otherwise, I leave the room or start crying. That’s the way I have grown up and what feels safe for me.

Similarly, when a child has an abusive parent, he or she picks up a lot of self-protective habits that can be traced back to the atmosphere in the childhood home.

For a child who has grown up in an abusive home, chaos becomes a normal part of their lives, but it leaves a deep scar on their personalities. They either grow up to be aggressive, manipulative, and controlling, or they become very timid, insecure people.

Says Steven Stosny, Ph.D., “Witnessing a parent victimized is often more psychologically damaging to children than injuries from direct child abuse.” Just seeing emotional or physical abuse of one parent by another is more emotionally scarring than if the child were hit or punched by a parent.

While children from broken or divorced families do experience some difficulties as adults, kids in an abusive household have much more to contend with emotionally as they grow up.

They can become extremely doubtful of everybody, making them guarded and defensive, or they trust people too easily and end up becoming vulnerable to abuse themselves.

Most parents desire to give their children the best possible home environment. This is one reason victims of abuse try to pretend that everything is OK when it’s clearly not. They want to protect their kids, but an abusive relationship is not ideal for any child no matter how hard you may try to hide it.

Witnessing abuse at home or having to walk on eggshells so as not to upset the abusive parent will twist their emotional development and sense of self-esteem, leading them to be extremely insecure or overly aggressive.

Read About The Signs Of Emotional Abuse

4. They suffer from mental health problems.

Children abusive, dysfunctional families can show signs of post-traumatic stress disorder, particularly in the aftermath of a violent event. Young children may experience bedwetting, nightmares, and other sleep disturbances. They have a much higher risk of anxiety and depression as teens and adults.

Children in abusive families often feel helpless and hopeless, with little control or power to change the situation. They also feel shame and embarrassment about their situation. These feelings can lead to thoughts of suicide as a way to escape the fear and pain.

Because they come from a very chaotic and violent atmosphere, they are an anxious bunch. They often have panic attacks, and they are worried about the parent who is being abused. They’re overtly protective, at times, and it’s seen that when these children grow up and have a relationship, they might be a tad bit choking, leading to failed, or dissatisfying experiences.

Their mental health problems can lead to problems in school — truancy, low motivation, and poor grades. These school problems can further impact their self-esteem.

5. They are starved for attention and affection.

When children grow up in a troubled environment, they fail to get the care and nurturing that other children of their age receive. One or both of their parents neglect them, leaving the child emotionally starved and feeling unloved.

Their parents are so involved in handling their own crises that they fail to give their children the time, attention, and affection they need. In abusive households, one or both parents might be absent for long periods, depressed, impaired by drugs or alcohol, or just emotionally unavailable.

Not only does the child lack attention and affection, but also he or she may not receive the discipline, training, and guidance necessary to become a fully-functioning, emotionally mature adult.

Lacking in love and attention at home, children in abusive relationships might end up hanging with the wrong crowd to feel valued. They might become sexually active too early or sexually promiscuous.

A child who didn’t receive affection and nurturing at home might spend the rest of their adult lives trying to win love from others, while never really feeling lovable.

Because the environment they live in is not affectionate, they might also develop into cold people, devoid of empathy and understanding, causing them issues in adult relationships. They might also grow to hate one of their parents or both of them, thanks to the atmosphere they’ve been raised in.

If you are in a physically or emotionally abusive relationship, consider the profound impact your situation is having on your children’s lives. As painful as divorce or ending the relationship may be, you are an adult and have the skills to cope and move forward. Your children need a responsible adult to stand up for them and create a safe, secure, loving, and emotionally healthy environment.

Ask yourself these questions:

Aradhana Pandey writes about parenting, children with special needs, health and lifestyle. She writes to share her knowledge so that it may help others. Her posts on these subjects have been published on more than 250+ various sites like the Huffington Post, SheKnows, Mom Junction, and many more.

13 thoughts on “5 Ways Your Abusive Relationship Impacts Your Children”